The many myths of George Washington 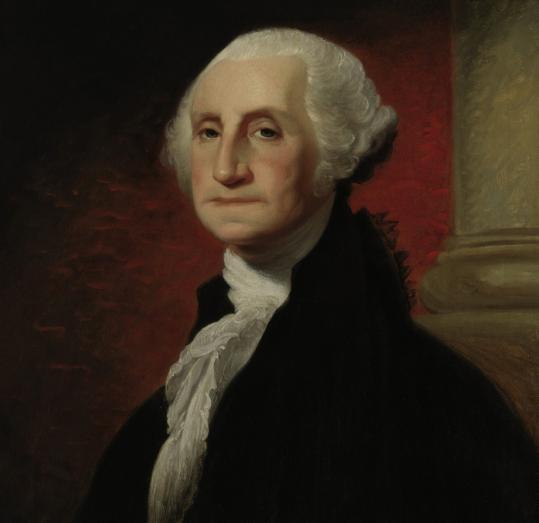 In the Congressional Prayer Room at the Capitol there is a stained-glass window depicting George Washington on his knees, praying in the snow at Valley Forge. Similar images appeared on a 2-cent stamp in 1928 commemorating the 150th anniversary of the Valley Forge encampment, and on the 13-cent Christmas stamp in 1977.

Despite those depictions, it is a story with “dubious origins,’’ writes Edward G. Lengel in “Inventing George Washington,’’ his account of the myths and legends that sprang up to breathe life into a symbolic figure.

There is the chopping-down-the-cherry-tree fable, and the use of Grant Wood’s absurdist illustration on the book’s jacket alerts the reader that Lengel will be providing a thoroughly entertaining counterweight to more traditional biographies.

Like the kneeling-in-the-snow tale, the cherry-tree yarn first appeared in “Parson’’ Mason Weems’s biography published in 1800 — a temporal immediacy that did not, however, turn the anecdotes into facts. Weems, Lengel explains, was “lazy’’ about research and facts, allowing his imitators to produce “an increasingly outrageous array of myth, legend, and outright fraud in the name of recovering Washington’s humanity.’’

Not surprisingly, that enterprise attracted P.T. Barnum, who — until she lapsed into a senility too abject even for Barnum — exhibited a frail, elderly black woman whom he billed as Washington’s childhood “mammy.’’

More recently, there is a fake prayer book that has become popular with televangelists. And then there are the “Washington-slept-here’’ claims: a “standing national joke,’’ Lengel notes, while many “homes and taverns where he had actually slept . . . fell into disrepair, including Mount Vernon.’’

Through a catalog of such material, Lengel tracks the progression in the ways Washington has been presented. After the 19th-century mythmakers, he writes, came the debunkers of the early 20th century.

And then, beginning in the mid-20th century with Douglas Southall Freeman and James Thomas Flexner, came several historically informed accounts aimed — despite their multivolume heft — at the general reader. That trend continues beyond Lengel’s work to include Ron Chernow’s well-received “Washington,’’ published last year.

The paradox, Lengel writes, is that Washington “stands at the crux of the conflict between academia and pop culture, between accuracy and entertainment,’’ a conflict Lengel experienced as the consultant for a video being produced for showing at Mount Vernon. He was impressed by the reenactors who were “ignored by academics’’ but were united in “an almost fanatical devotion to accuracy with a sincere desire to entertain.’’

Lengel is the editor in chief of the Papers of George Washington project at the University of Virginia, having joined the project as a graduate student 15 years ago. The task, he suggests tongue-in-cheek, is “slated for ‘completion’ by about 2025.’’

He notes that within months of Washington’s death in December 1799, his nephew was selling the letters and other documents that Washington had been working on even in the days before his death. While many have been located and preserved, to this day dealers continue to cut others up into salable items.

One extraordinary set of documents that has survived intact comprises the maps Washington collected and made use of as a surveyor, landowner, military commander, and president.

They reflect the towering figure of a Washington who does not need to be invented. What Lengel has done with his revisiting of the popular stories and anecdotes — the cherry tree, the sleepovers, and the rest — is to suggest “Americans’ enduring desire to know Washington personally.’’

Michael Kenney, a Cambridge-based freelance writer, can be reached at mkenney777@gmail.com.