Battles on the home front 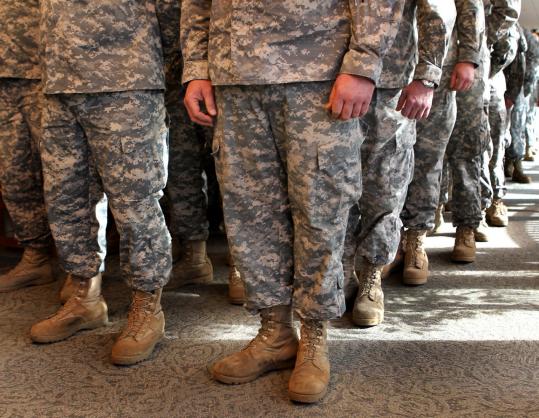 Siobhan Fallon knows military life inside and out. Her new collection of stories, “You Know When the Men Are Gone,’’ delivers often poignant, sometimes crude, and consistently compelling insights derived from the time she spent in Fort Hood, Texas, during her husband’s two tours of duty in Iraq.

And while many of her characters are women whose husbands have been deployed, it is to Fallon’s credit as a writer that the stories written from the perspective of soldiers who’ve returned from the front are equally convincing.

For instance, in “The Last Stand,’’ Specialist Kit Murphy is, when he arrives back in the States, still getting used to the crutches he has to use after an improvised explosive device went off in his Humvee in Sadr City, killing a Sergeant Schaeffer whose body threw Kit’s against the side of the vehicle and shielded him from the flames until Kit could be pulled out. Throughout his tour in Iraq, Kit put himself to sleep by reciting lists at night, the longest of which was “All the Things at Home I Never Thanked My Wife For.’’ But when he returns, he finds that Helena is solicitous of his condition but no longer interested in being married to him, which prompts Kit to recall a soldier buddy who, three months into deployment, opened a package from home to find divorce papers underneath a bag of melted M&Ms. (This is the kind of pitch-perfect, unexpected detail Fallon renders so adeptly throughout the collection. In another story, “Camp Liberty,’’ an investment banker who enlists after the 9/11 terrorist attacks is struck when, searching among the belongings of his missing female Iraqi interpreter, he comes across a worn biography of Oprah Winfrey.)

Kit’s wife does indeed abandon him, and the story leaves him with the “certainty that Helena, that everything, was gone.’’ However, at one point we witness him summoning the fortitude to say to himself, “Something’s got to go right for me.’’ It takes some time, but in the final story of the book, “Gold Star,’’ we are privileged to witness that “something’’: This story is told from the perspective of Sergeant Schaeffer’s wife, Josie, who — having been contacted by Kit — invites him to lunch so that she can hear the story of how the IED killed her husband. Their final moment of connection and intimacy, constituting the final tableau of the collection, seems at once surprising and completely inevitable. It is a moment depicting grace under fire — not of mortar, but of the seemingly incessant fusillade of stress brought on by imaginary or real betrayals, not to mention the constant threat of being killed or receiving word that your loved one has been blown to bits halfway across the world.

From the women who suffer the “interminable waiting . . . such a long, gray nothingness between departure and return,’’ we learn about the prevailing mentality of military wives. In the title story, the protagonist, Meg, and the other women in her building are bothered at all hours by the barking dog kept by Natalya, one of the Fort Hood wives they resent because rumor has it that in her native Kosovo, she stole her future husband from his first wife, “who waited patiently for him at home.’’ But Meg and the other wives don’t report the dog to the MPs and not because of Natalya or even because of her two children: “No, they would not be responsible for the grief her husband would feel when he came back, having survived the year in Iraq, to a home without a dog.’’ Neither do the women report Natalya’s neglect as a mother: “But no one ever called Family Services. Instead they thought of her husband coming home to find both children gone.’’

There is much actual unfaithfulness and the suspicion of unfaithfulness among the characters in this collection. In “Inside the Break,’’ the wives of Bravo Company are watching their husbands depart in the blue buses that are the first vehicles of their deployment. The wives all have tears in their eyes, until they peer further, “their grief forgotten and filled with a new wariness’’ and realize that the supply bus “held a threat that had never occurred to any of them when they thought of faraway insurgents and bombs and helicopters crashing’’ — 15 women who will make the trip along with the departing husbands.

And in the riveting story “Leave,’’ a soldier suspects his wife is cheating on him, so he returns home for a “reconnaissance’’ mission in which he hides out in his own basement, not having told his wife he was coming, so that he can determine — by spying on her — whether she is being unfaithful.

“You Know When the Men Are Gone’’ is a haunting collection likely to inform and move many readers, whether they are familiar with the intricacies of military life or not. Though the everyday experience of the women waiting for their husbands to come home may be “a sense of muted life,’’ these stories pulse with the reality of combat and its domestic repercussions.

Jessica Treadway’s new collection of stories, “Please Come Back To Me,’’ received the Flannery O’Connor Award for Short Fiction. She can be reached at jessicatreadway @comcast.net.