Coming to a DVD near you

Famed film critic opens lens into the future of cinema 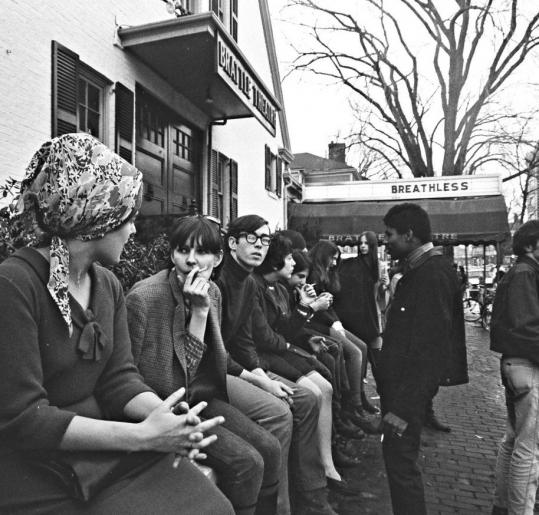 The advent of new technology has changed the nature of cinephilia, once defined by religious attendance at art-house theaters, such as the Brattle. (David Hunsberger)
By Saul Austerlitz Globe Correspondent / November 28, 2010

Does film have a future? The question is ideologically freighted and fraught with ambiguity: Just what do we mean by film? Is the cinema something that can only exist when 35mm film is run through a projector in the dark of an auditorium or can it be a more private, less technically ideal experience, involving DVD players, flat-screen televisions, and copious use of the pause and rewind buttons?

Jonathan Rosenbaum has become, by some consensus, the most widely respected film critic in the United States in the last decade in part because of his willingness to tackle such thorny questions. With his answers, he has also provided a bridge between the starry-eyed nostalgists of the 1960s, when Godard and Buñuel and Antonioni roamed the earth, and the movie-mad youngsters of today, far less numerous than their predecessors, but quite possibly even more passionate.

For all that, however, Rosenbaum remains something of a cult figure himself, more “The Man Who Fell to Earth’’ than “Star Wars.’’ To begin with, there was Rosenbaum’s outlet for many years: the Chicago Reader, an alternative newspaper with little to no national presence. There was also Rosenbaum’s attitude, diametrically at odds with the what-to-see-this-weekend tone of most mainstream newspaper critics. Often, Rosenbaum penned feature-length reviews of films that would receive only limited theatrical releases — or no release at all. Rosenbaum was using his critical soapbox to agitate for films that he believed deserved a larger audience; he also was reminding serious moviegoers that part of the experience of being a film buff was knowing that some works would forever remain beyond their grasp.

“Goodbye Cinema, Hello Cinephilia’’ traces a transformation, both in Rosenbaum’s outlook and in the nature of the obsessive movie love of which he is both exemplar and chronicler. The new cinephilia, as he sees it, is no longer tied to the theatrical experience: “[O]ne of the crucial qualifications of an educated and cosmopolitan DVD watcher,’’ Rosenbaum opines, “is owning a multiregional player,’’ which allows users to view discs from all over the world, regardless of the embedded region code. Newly equipped, Rosenbaum has become film criticism’s philosopher-king, less devoted to the trench warfare of the Friday review than the view from the ramparts.

“I await the end of Cinema with optimism,’’ Rosenbaum approvingly quotes filmmaker Jean-Luc Godard, but where for Godard the end would mark the rough equivalent of the end of history, giving way to a formless void of drab spectacle, for Rosenbaum cinema is slowly, laboriously dying, making way for cinephilia. Where once being a cinephile was defined by religious attendance at the local art-house theater, it is now defined by a Blu-ray player, a copiously annotated queue, and an RSS feed overstuffed with film blogs. Rosenbaum has learned to stop worrying and love technology, embracing the DVD with a late-blooming enthusiast’s passion.

The essays collected in “Goodbye Cinema’’ mostly post-date Rosenbaum’s retirement from the Reader and are a grab bag of DVD liner notes, articles from film magazines, and contributions to various film websites. The tone, as a result, is occasionally uneven, with overtly political efforts like “Bushwhacked Cinema’’ not catering to Rosenbaum’s strongest suits. Always well-informed, Rosenbaum is decidedly not a political critic, and his efforts to serve as one come off as occasionally misguided; Barry Goldwater was not, of course, John F. Kennedy’s challenger in the 1960 presidential election.

For reasons that go unexplained, Rosenbaum also sees fit to include a number of longer essays from the 1970s and 1980s. These academically inclined studies, more theoretical and less deeply felt than his later work, sit jarringly with the rest of “Goodbye Cinema.’’ As the author himself says of one such piece, “I’m surprised to discover that I still agree with a lot of it, even though it seems to be written by someone else.’’ Insomuch as the old Rosenbaum was a passionate defender of cinema (as opposed to the new cinephilia), the older segments of this book are indeed written by another critic, and do not entirely belong here.

Rosenbaum notes that the primary advantage of having retired from weekly movie reviewing is the ability to catch up on old movies (spoken like a true cinephile), and much of “Goodbye Cinema’’ is devoted to the merits of older or hard-to-find films. In describing rarely screened movies like Lev Kuleshov’s “The Great Consoler’’ or Ritwik Ghatak’s “Ajantrik,’’ Rosenbaum is like a restaurant critic describing the mouth-watering meal he had at a restaurant that just closed in another city. Pedro Costa, Nagisa Oshima, Pere Portabella, Dusan Makavejev: The list of filmmakers whom “Goodbye Cinema’’ will inspire readers to investigate further is thorough and impressively varied.

Cinema may be half-dead, but the movies carry on — as do the critics who help us understand what we’ve seen or guide us in the direction of what we should see. The new generation of cinephiles no longer worships celluloid with the same clammy intensity as their predecessors, but movie love is hardly going anywhere. The movies we love have gotten less precious and more personal, and Rosenbaum is wise enough to see it.

Saul Austerlitz is the author of “Another Fine Mess: A History of American Film Comedy.’’ He can be reached at swa204@gmail.com.