Bio examines his life before, after Pink Floyd 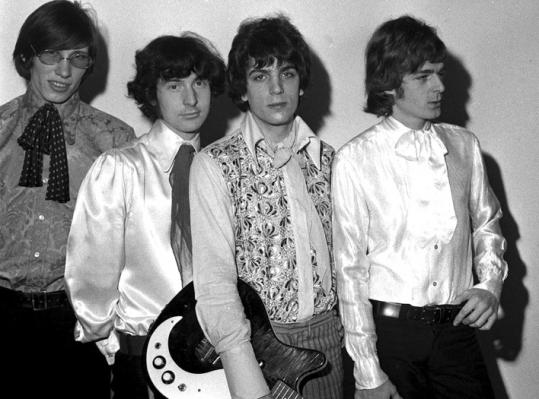 Climb aboard for a trip back to the time of paisley shirts, velvet trousers, acid parties, and the brilliant whimsy of Syd Barrett, the mixed-up genius who founded Pink Floyd. Barrett was a pioneer of psychedelic music but he is sadly more often recalled today for becoming a fragile recluse who shunned stardom and dropped out for the last 30 years of his life, content to garden in his backyard, bicycle quietly around his English neighborhood, and paint rather than create music.

Author Rob Chapman, a Briton who wrote Barrett’s obituary in Mojo magazine in 2006, takes the title of this striking, richly detailed new biography from Barrett’s admission that “I’ve got a very irregular head. And I’m not anything you think I am anyway.’’

That’s probably true. Barrett was way ahead of his time. He combined wildly inventive, acid-fueled guitar playing and childlike, sometimes inscrutable, lyrical pastiches borrowed from “Mother Goose’’ rhymes and poets from Shakespeare to Hilaire Belloc and Edward Lear. He came up with Pink Floyd by fusing the names of two obscure North Carolina bluesmen, Pink Anderson and Floyd Council. And he wrote most of the band’s seminal first album, “The Piper at the Gates of Dawn,’’ released in 1967, which Chapman argues is the most influential psychedelic record this side of the Beatles’ “Sgt. Pepper’s Lonely Hearts Club Band.’’

There have been previous Barrett bios, but Chapman’s book probes deeper than any other, as the author talked to more of Syd’s friends from his childhood in Cambridge, England, and gathered new insights from Barrett’s sister, Rosemary, who cared for Syd when he returned to Cambridge a broken man. This is Syd from top to bottom, from his innocent days in art school to the countercultural shifts of the London Free School (other participants included Beatles manager Brian Epstein and radical psychiatrist R.D. Laing), the early Floyd gigs at the acid-drenched UFO Club in London, to the unnerving road gigs that eventually destroyed Barrett’s confidence. Londoners loved the band, but when they played 29-minute, jam-filled versions of “Interstellar Overdrive’’ in suburbs and country towns, the crowd sometimes hurled bottles and cans at them.

Chapman overwrites at times, slipping into a high-brow academic approach when comparing Barrett’s artistic vision to that of T.S. Eliot or cubist painters; and he even quotes from Susan Sontag’s “The Aesthetics of Silence’’ for no real purpose. But Chapman exquisitely describes the actual music, especially when Syd experimented with slide guitar improvisations using his lighter, a plastic ruler, and steel ball bearings on his strings, creating otherworldly effects.

Barrett, who died in 2006 at 60 from pancreatic cancer, was the second youngest of five children born to a prosperous family. His dad, Dr. Arthur Max Barrett, was a well-known pathologist who wrote about glandular fever, tuberculosis, and mustard gas poisoning. But the young Syd took to painting, plus acting in his school’s dramatic society and falling in love with Jack Kerouac’s Beat epic, “On the Road.’’

Barrett’s Pink Floyd mates Roger Waters, Richard Wright, and Nick Mason shared similar family backgrounds but their musical differences became too great. Barrett was into spontaneity while the others were more serious, linear, and far less into acid. And once Barrett started missing gigs because of erratic behavior, the band replaced him with David Gilmour.

Barrett’s descent is excruciatingly sad. Prodigious amounts of acid and Mandrax are blamed. But Gilmour proved to be an unsung hero because he made sure Barrett still got the royalties due to him, which amounted to roughly $200,000 a year.

The author plays the “what if’’ game of wondering what would have happened if Barrett continued to make music (he didn’t record after 1974), and he foolishly and pointlessly talks about how John Lennon, Paul McCartney, and the Stones were all burnouts in their own way. Clearly, this work is a product of hero worship. It’s still a fascinating journey back to the ’60s, both the soaring highs and the unfortunate lows.

Steve Morse is a freelance writer who can be reached at spmorse@gmail.com.

A VERY IRREGULAR HEAD: The Life of Syd Barrett By Rob Chapman