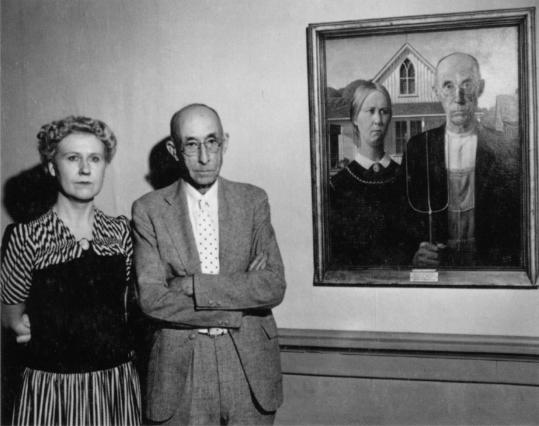 In 1930, artist Grant Wood achieved sudden national fame with “American Gothic,’’ his iconic painting of a pitchfork-wielding farmer and a stern, black-clad woman posed before a Victorian farmhouse. Hailed by Depression-era newspapers as a symbol of American values and by avant-garde intellectuals as a satire of small-town provincialism, “American Gothic’’ has since become one of the most reproduced and parodied artworks in history — spoofed in political posters for the legalization of marijuana and cartoons about Bill Clinton’s marital woes. But the true motivations behind this picture remain as difficult to characterize as the soft-spoken and deeply-closeted gay man who painted it.

A provocative new biography, “Grant Wood: A Life,’’ by Wheaton College professor R. Tripp Evans, is the first to deal candidly with Wood’s sexual orientation. Searching through archival documents, correspondence, and private papers, Evans has constructed a rich and compelling portrait of Wood that sheds new light not only on the artist’s work but on the intimate details of life in the American heartland during the first half of the 20th century.

Perhaps the book’s most surprising revelation is that Wood’s homosexuality was something of an open secret in his hometown of Cedar Rapids, Iowa, where an attitude of “don’t ask; don’t tell,’’ allowed a small gay and lesbian subculture to exist in peace, so long as it remained invisible. Respected figures in the community, including prominent businesspeople and a local school principal, shielded Wood from invidious scrutiny and encouraged his artistic aspirations. David Turner, owner of the primary funeral home in Cedar Rapids and a member of one of the county’s founding families, acted as Wood’s first patron. Turner allowed Wood and the artist’s widowed mother to live for years rent free in the mortuary’s vacant carriage house, formerly a storage facility for horse-drawn hearses.

The success of “American Gothic’’ greatly complicated Wood’s quiet existence. As the artist’s sister, Nan, who lived for a time with her brother and mother, later recalled, “Strangers now considered the studio a public place rather than the home where we lived. . . . A group arrived while we were eating, and one of them said, ‘You just go on eating; that’s perfectly all right.’ ”

For a man with a secret, such celebrity was an especially mixed blessing. Wood may have been the subject of occasional whispers in Cedar Rapids, but now major state and national media outlets hinted all too broadly at the hidden subtext of his life, describing him as “a shy bachelor’’ who maintained “a discreet silence about marriage,’’ while making pointed reference to his high-pitched voice and affinity for the color pink — coded allusions, Evans argues, to homosexuality.

Fear of exposure seems to have led Wood to adopt the down-to-earth public persona of America’s farmer-artist. He routinely donned denim overalls for interviews and once ludicrously proclaimed, “All the really good ideas I’ve ever had came to me while I was milking a cow,’’ even though he hadn’t lived on a farm since he was 10 years old. Not surprisingly, surveillance and creative role-playing were also important themes in Wood’s art. The awkward encounter between viewer and model gives rise to much of the humor in “American Gothic.’’ And Wood’s later masterpiece “Parson Weems’ Fable’’ (1939), takes the complexities of candor as its literal subject, whimsically re-enacting the story of George Washington and the cherry tree, a popular but quite fictional narrative about the value of honesty in America.

Evans dissects these and other works by Wood with skill and discernment, but the sheer volume of visual analysis is sometimes overwhelming. Judiciously curtailing this tendency might have allowed for a more satisfying discussion of certain broad historical trends, such as the intersection of the Great Depression with the blossoming of Wood’s career as an observer of the American scene, the national mood having played a decisive role in the initial reception of his work.

The climactic crisis of Wood’s life occurred with his mother’s drastically declining health and eventual death in 1935. No longer able to justify bachelorhood with the excuse of filial obligation, Wood entered into a disastrous marriage with a woman much his senior and left Cedar Rapids for Iowa City, where he taught art classes at the University of Iowa. Lacking the extensive network of friends who had previously supported and protected him, he was denounced as a homosexual in a formal departmental complaint lodged by five colleagues. The matter was eventually hushed up, and Wood was allowed to keep his job, but the ordeal wreaked havoc on his health. He died in 1942, at the age of 50, as a result of pancreatic and liver cancer brought on by a severe drinking problem.

This dark incident has an equally dark epilogue. One of Wood’s accusers was H.W. Janson, whose “History of Art’’ later became a standard college-level textbook. Vindictively, Janson omitted Wood from this canonical guide to art history. Fortunately, Evans’s excellent biography will help rectify that gross injustice.

Jonathan Lopez, editor-at-large of Art & Antiques and author of “The Man Who Made Vermeers,’’ can be reached at contact@jonathanlopez.net.