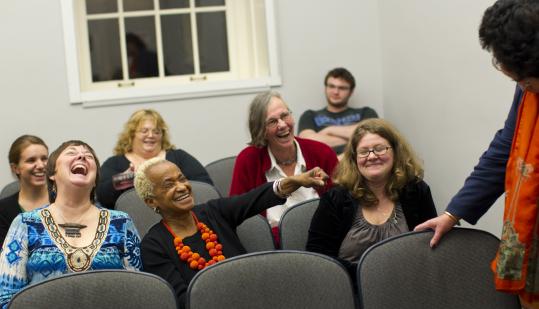 Harvard Extension School lecturer Sue Weaver Schopf and her students discuss one of the books they are reading in ‘‘The Vampire in Literature and Film’’ class. (DINA RUDICK/GLOBE STAFF)
By Meredith Goldstein Globe Staff / October 23, 2010

Sue Weaver Schopf’s cluttered Harvard University Extension School office is lined with the yellowed paperbacks one might expect on the bookshelves of an academic who specializes in 19th-century literature. There’s “Anna Karenina,’’ Thomas Hardy’s “The Return of the Native,’’ and the obligatory stacks of works by Jane Austen and the Bronte sisters.

And then there’s Schopf’s copy of the teen romance novel “Twilight’’ in Icelandic. She pulls it off the shelf more frequently than you’d think.

“This is what my students get me,’’ Schopf said, laughing and gesturing to all the vampire trinkets around her office — buttons, posters, foreign copies of vampire bestsellers, and a glittery collage of “Twilight’’ actor Robert Pattinson made by her friends.

Schopf, the associate dean of the Master’s of Liberal Arts program at the Extension School, has always been interested in myths about the undead. She’d been thinking of putting together a course on the subject for years, but when she read the “Twilight’’ series and saw it spark a cultural phenomenon, she put her plan in motion.

Her timing for the class couldn’t have been better. When she listed “ENGL E-212 The Vampire in Literature and Film’’ for the first time for this fall, she not only drew her many loyal literature students, but also pop-culture obsessed vampire lovers — fans not only of “Twilight,’’ but of HBO’s “True Blood,’’ “Let the Right One In,’’ and other blood-sucking narratives.

The class is one of the Extension School’s largest, with 183 enrolled. Some of those students take the course online from other countries. Schopf says that many have thanked her for validating their interest in the subject.

Schopf’s class is mostly female, but there are a handful of men scattered about the room as well. There are undergrads taking the course for credit, as well as school teachers and local business people who signed up with friends. During the second class of the semester, a 20-something in a “Twilight Saga: New Moon’’ T-shirt sat near two middle-aged women who, based on their participation in class, have far more interest in literary history than in anything with fangs.

“I thought [the class] would be large, but it’s exceeded my expectations,’’ Schopf said. “I was bombarded by e-mails from all over the world.’’ The course also has the most active online discussion board Schopf’s ever seen. The students spend hours online debating texts and music affiliated with the genre.

Student Rhonda Pickens, 47, who has taken classes in Orientalism and British literature with Schopf, admitted she had no interest in vampire lit but knew that Schopf would turn her on to it.

“She could make a phone book interesting,’’ Pickens joked. She’s already engrossed in Bram Stoker’s “Dracula,’’ which is required reading for the class and has already spawned debates over the coffin as metaphor for closeted homosexuality and Stoker’s vampire as an embodiment of cultural fears.

Stoker came right after classics such as John Polidori’s “The Vampyre’’ from 1819 and Le Fanu’s “Carmilla’’ from 1872. By the end of the semester, students will delve into modern titles such as “Let the Right One In’’ (which is now in theaters as “Let Me In’’), Charlaine Harris’s “Southern Vampire Mysteries,’’ on which HBO’s “True Blood’’ is based, and, of course, “Twilight,’’ which, for the record, Schopf takes as seriously as the other literature. She loves the teenage vampire book and scoffs at the criticisms. She’s actually just as interested in the strange, overwhelming negativity that surrounds Stephenie Meyer’s chaste young-adult series as she is its mass appeal.

“Why do these books provoke such a strong reaction?’’ she asks.

Of course, Schopf has theories about why vampire hero Edward Cullen is so despised by young men.

And just as every vampire tale reflects a social fear, Schopf says, so does “Twilight.’’

“We live in a Botox age now,’’ Schopf says, explaining that in time, people might see “Twilight’’ as a reflection of our fear of aging and becoming less beautiful.

One of Schopf’s goals with the class is to make students aware that vampires started out as lonely lovers, as opposed to soulless, bloodthirsty villains. The first vampire tales in literature painted the undead as seductive outsiders who were desperate for human companionship and romance.

“I think a lot of people haven’t read these early stories,’’ Schopf explains. “Polidori’s vampire — he’s not described in some sort of terribly fangy fashion. Anne Rice understood this, of course. Her vampires are attractive and seek community.’’

Other contemporary books on the reading list include Rice’s “Interview With the Vampire’’ and Rachel Caine’s “Glass Houses.’’

“I was very distressed to have to leave off Stephen King’s ‘Salem’s Lot,’ ’’ she said. “It’s huge. I didn’t think students would appreciate having a 900-page novel to read.’’

Throughout the course, students will discuss literary and historical theory including University of Pennsylvania scholar Nina Auerbach’s “Our Vampires, Ourselves,’’ an academic look at how each culture invents its own vampire myth. After every class, Schopf screens a movie for students — from various interpretations of Stoker’s “Dracula,’’ to the obscure independent film “The Addiction,’’ in which Lili Taylor stars as a philosophy student who becomes a vampire while examining the nature of evil.

There’s also “The Vampire Lovers,’’ a not-so-great-yet-entertaining vampire film from 1970. It’s one of Schopf’s guilty pleasures.

“I’m almost embarrassed to show it — but not quite,’’ she says.

Schopf already has plans to teach the class again next fall. “By popular demand,’’ she says, laughing when she realizes she’ll be teaching the course when the next “Twilight’’ movie, part one of “Breaking Dawn,’’ is scheduled to be released. “Good timing. We’re all eagerly awaiting.’’