A justice explains the mysteries and mechanics of the high court 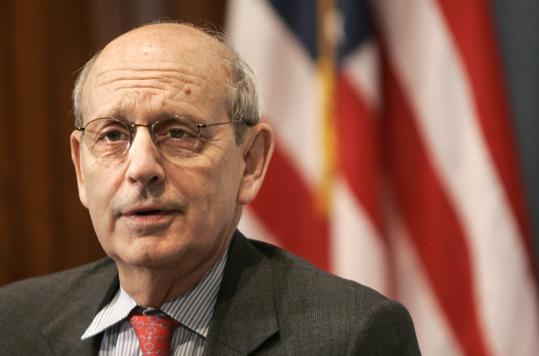 Associate Justice Stephen Breyer has produced a users’ guide to both the Constitution and the Supreme Court. (Lawrence Jackson/Associated Press/File 2006)
By David M. Shribman September 23, 2010

Stephen Breyer, who as a Supreme Court justice has an unusually acute appreciation for precedent, will surely agree that this is unprecedented: a review that urges readers to begin a book at the very end before plunging into the body of the text. In the case of Breyer’s “Making Our Democracy Work,’’ go straight to Appendix B.

There, beginning on page 228, you will find perhaps the best five-page description ever produced of how the Supreme Court works. It explains how the court chooses its work, how justices study cases, how Supreme Court majorities are produced. And it sets forth the central fact about the Constitution and the court that acts as its curator:

The Constitution sets boundaries for governmental bodies and the court, in Breyer’s words, “patrols those boundaries, deciding when an action by a state or federal government falls outside the bounds and lies in forbidden territory.’’

Breyer’s treatise on justice and democracy takes a novel approach. It is at once an attempt to explain the mysteries of the court, including the biggest mystery of all (how we came to accept it as a legitimate arbiter of important philosophies and legislative issues — it wasn’t always the case) and an effort to explain the mechanics of how the court moves and how it should approach its work.

“I suggest that by understanding that its actions have real-world consequences and taking those consequences into account,’’ he argues, “the court can help make the law work more effectively and thereby better achieve the Constitution’s basic objective of creating a workable democratic government.’’

Breyer, a Cambridge resident, has produced a users’ guide to both the Constitution and the Supreme Court, the branch that Alexander Hamilton once believed was “the weakest of the three departments of power.’’ He begins by explaining that the judiciary is not the cloistered preserve of myth and folklore. Indeed, he says, “Judges read the newspaper, they read academic critiques of their decisions, and they read briefs urging them to decide a case one way or the other.’’ Plus, as Mr. Dooley, the century-old purveyor of comic wisdom, told us, the justices follow the election returns.

At the heart of this volume is Breyer’s outline of the origins and implications of the court’s most powerful tool, judicial review — established by Chief Justice John Marshall in 1803 and extended carefully and hesitatingly thereafter. Tracing the passage of court and country through several landmark cases — the Cherokee land dispute in the Jacksonian age, the Dred Scott decision before the Civil War, the Little Rock school desegregation case of 1957, even Bush v. Gore in 2000 — Breyer sets out how the court established its legitimacy and consolidated its power.

“The public has developed a habit of following the court’s constitutional interpretations, even those with which it strongly disagrees,’’ he writes. “Today we find it as normal to respect the court’s decision as to breathe the air around us.’’

But Breyer argues that the court must constantly act to preserve those powers — in short, to “maintain the public trust it has earned.’’ He says (and here he is entering contentious political and judicial waters) that this requires “applying constant constitutional principles to changing circumstances.’’ This being a book and not a Supreme Court decision we are not provided with the dissent from Justice Antonin Scalia.

Breyer believes that “originalism’’ — the notion that the Constitution is fixed in its 1787 form plus its amendments — is dangerous to both the court and the nation. “Why,’’ he asks, “would people want to live under the ‘dead hand’ of an 18th-century Constitution that preserved not enduring values but specific 18th-century thoughts about how those values then applied?’’

There is more. He maintains that high-court justices should give emphasis to the purpose of law more than to the words that constitute the law. And he believes the court should cultivate institutional respect for — even deference to — Congress, the executive agencies, and the states. The goal is — here is a word that recurs repeatedly in these pages — a “workable’’ government and a “workable’’ democracy.

This is by no means a heroic biography of the court. Breyer criticizes the Dred Scott decision, for example, and terms the court’s support for racial and cultural exclusion ordered during World War II a matter of “long-lasting shame.’’ His argument is that the court’s trust — its legitimacy — must be renewed in each age.

“The public’s acceptance is never a sure thing,’’ he writes. “It cannot be taken for granted. It must be transmitted through custom and understanding from one generation to the next.’’ This book is a good start.

MAKING OUR DEMOCRACY WORK: A Judge’s View By Stephen Breyer