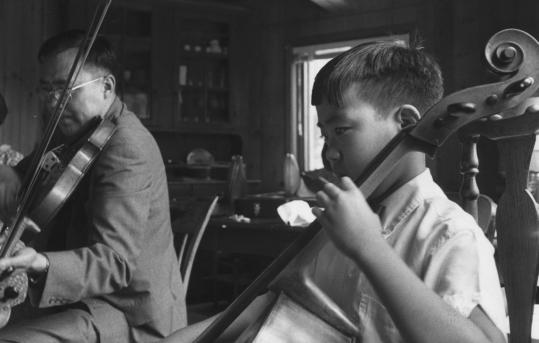 The central lesson of genealogy is both banal and profound: We are all related. The human race is a sea of distant cousins separated only by geography and circumstance. OK, so what? Making this biological fact meaningful is the challenge facing any writer attempting family history. Typically, the project takes one of two forms: a specific story of an individual family (as in the case of Edward Ball’s “Slaves in the Family’’) or a global approach to human evolution (Spencer Wells’s “The Journey of Man’’). In “Faces of America,’’ Henry Louis Gates Jr. has found a middle path: He applies the most rigorous genealogical and genetic tools to the family histories of 12 ethnically distinct Americans, and in doing so touches on the history of not only these individuals but on the human race itself. For anyone who enjoyed Gates’s popular PBS programs “African American Lives” or the NBC series “Who Do You Think You Are?”, “Faces of America,’’ based on a second Gates TV project, will serve as another enjoyable and educational installment of America’s newest pastime: celebrity genealogy.

Gates sought the support of “twelve remarkable people . . . who have made a profound cultural impact on our nation and who come from different backgrounds,” among them Mike Nichols, Meryl Streep, Yo-Yo Ma, Louise Erdrich, Malcolm Gladwell, and Kristi Yamaguchi. Gates’s breezy, intimate style and obvious affection for his subjects (“[O]ver dinners on Martha’s Vineyard, I had come to learn a bit about [Mike Nichols’s] remarkable childhood.” ) results in a book that is the bionic version of that old fourth-grade family tree assignment, thanks to the support of a world-class Rolodex and Harvard researchers and geneticists. It’s fun.

Each chapter takes on the genealogy of one American and, given the diverse backgrounds of Gates’s subjects, the book offers a broad picture of America’s immigration history. One of the strongest themes of the book, in fact, is the issue of American immigration policy, from the Chinese Exclusion Act of 1882 (which ironically made it possible for Kristi Yamaguchi’s Japanese grandfather to attain a work permit and emigrate to the suddenly labor-starved Hawaii), to the requirement that, in 1938, Jewish immigrants from Germany be “guaranteed” financially by an American relative in order to gain passage — as in the case of Mike Nichols’s family seeking refuge from the Nazi regime.

In every chapter, some combination of chance, hard work, and often privilege conspire to create the American circumstances that produce a celebrated American artist, physician, or scholar. This conspiracy of forces is another major theme, one that is expressed most strongly in the chapter about the author Malcolm Gladwell. When Gates remarks that Gladwell’s tree “shows a long steady march toward, well, toward Malcolm Gladwell, the best-selling author and brilliant thinker,” Gladwell concurs. He admits that it’s “sobering” to see that his mixed-race Jamaican ancestors used their relative privilege to subjugate darker-skinned Jamaicans and “clung to their middle-class status and didn’t give it up.”

The same lesson emerges in the story of acclaimed cellist Yo-Yo Ma, whose Chinese parents escaped the agrarian lives of their ancestors and then Mao’s Cultural Revolution by moving first to France and then to the United States. As Yo-Yo Ma’s father told him, “It takes the wealth of three generations to make a musician — the first to work the fields, the second to go to school, and the third to master an instrument.”

The traditional genealogical research performed by Gates and his team — tracking down old documents; foraging through the bureaucracy of civic and religious institutions — is extensive and impressive. But toward the end of each chapter Gates brings in his most modern, high-tech weapon: DNA. Gates is excellent at explaining the scope and the limits of DNA testing for genealogical purposes; DNA is most useful, for example, in demonstrating the migration patterns of one’s ancient ancestors. DNA tests reveal that the actress Eva Longoria Parker and Yo-Yo Ma share a common ancestor in the last 250 years — “He’s Mexican?” she jokingly asks, but it’s no joke: They both had the same Native American ancestor in the recent past.

This result highlights one of the few disappointments in the book, though Gates is not responsible for it. The only one of his 12 subjects to refuse DNA testing was author Louise Erdrich, whose paternal ancestry is German and maternal ancestry is Ojibwe. Erdrich “declined, after conferring with her family and with other members of her tribe.” Native Americans have been reluctant to participate in genetic testing; many find that results indicating an Asian ancestor (who migrated across the Bering Land Bridge in prehistoric times) conflict with their tribal origin stories. Neither Gates nor Erdrich offer any explanation for her decision, but the absence of Erdrich’s DNA results is a reminder that each one of us holds a unique piece of the human genetic puzzle. The more information we compile about our shared genetic history, the closer we’ll get to understanding our earliest human origins.

Buzzy Jackson is a research associate at the Center of the American West at University of Colorado at Boulder and the author of ”Shaking the Family Tree: Blue Bloods, Black Sheep, and Other Obsessions of an Accidental Genealogist.” She can be reached at askbuzzy@gmail.com.