When force is the preferred option, not the last resort 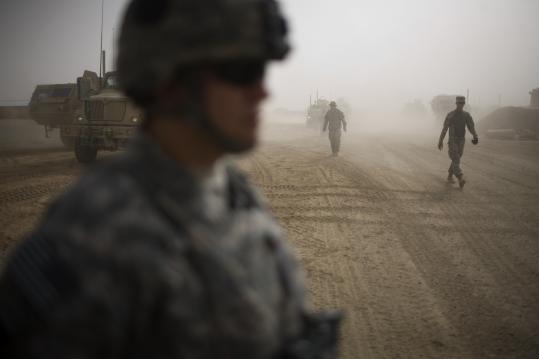 Two years ago in “The Limits of Power,’’ Andrew Bacevich wrote that every US leader since World War II had embraced the idea that superior military power would guarantee American security.

In his new book, “Washington Rules,’’ the Boston University professor again ridicules that belief, and expands on his thesis that military and political hubris is “propelling the United States toward insolvency and perpetual war. Over the horizon a shipwreck of epic proportions awaits.’’

The United States spends $700 billion yearly on its military, and stations 300,000 troops abroad, more in each instance than the rest of the world combined.

A retired Army colonel who served in Vietnam, Bacevich describes in somewhat dry prose the bipartisan consensus in support of military might. Every president, including Barack Obama, has believed that the United States has the capacity and the duty to enforce global order.

Bacevich recounts the botched efforts to topple Fidel Castro in Cuba and the disastrous war in Vietnam, which had been billed as an effort to save Southeast Asia from the spread of communism. Having learned little or nothing from Vietnam, the United States more recently bogged down in Iraq and Afghanistan, convinced that liberating one or two countries in the Islamic world would “unleash a wave of change eventually rippling across the entire Greater Middle East.’’

This aggressive strategy required the United States “to shed any lingering reticence when it came to the actual use of force. . . . Rather than merely containing threats to national security, the United States would anticipate, confront and eliminate threats before they actually posed a danger.’’ In other words, force was “no longer . . . a last resort,’’ but instead “the preferred option.’’

Liberals likely will enjoy this book, and conservatives surely will reject it, but Bacevich, who has excellent credentials and writes with authority about military strategy and international politics, deserves a hearing.

Unfortunately, the book is larded with military jargon such as “network centric warfare,’’ “forward-deployed units,’’ “semiwarriors,’’ and “power projection capabilities.’’ The author also relies too much on acronyms such as SAC, ARVN, SIOP, and RMA.

US troops have been fighting in Afghanistan for nine years, with no end in sight. Meanwhile, Bacevich says, military leaders likely are thinking of other possible targets, including Pakistan, Yemen, and Somalia. But there is no evidence that such interventions “will advance the cause of global peace.’’

Bacevich recommends, instead, that US leaders embrace values that accord with America’s “anti-imperial origins.’’ First, recognize that the purpose of the military is not “to combat evil or remake the world,’’ but to defend the United States. Second, station troops at home rather than at posts around the world. Third, use force only as a last resort and only in self-defense.

As in his previous book, Bacevich blames the push toward never-ending war on the American people, who are engaged in “the frantic pursuit of happiness, defined more often than not in terms of wealth, celebrity, and personal license,’’ and who care little about military affairs.

Although Bacevich writes with passion, much of the book has an academic or military bent more suited, perhaps, to a class at West Point.

Bacevich offers no real hope that anything will change, which is tragic because the possibility of American soldiers dying in wars without end should be enough to snap people out of indifference.

Bill Williams is a freelance writer in West Hartford and a member of the National Book Critics Circle. He can be reached at billwaw@comcast.net.