Triteness and redundancies aside, an irresistible peek into what was the most tempestuous pairing of its day 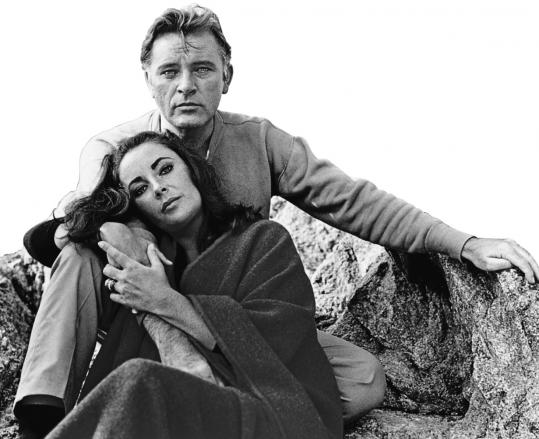 The public’s fascination with the romance between Elizabeth Taylor and Richard Burton far eclipsed that with Angelina Jolie and Brad Pitt.
By Rebecca Steinitz Globe Correspondent / July 4, 2010

My inner librarian and my inner drama queen are at war over “Furious Love: Elizabeth Taylor, Richard Burton, and the Marriage of the Century.’’ Or perhaps I should say my inner pedant and my inner romantic.

What do you do with a book that calls Elizabeth Taylor “an old-fashioned girl’’ who “was born to rule, but . . . wanted a man’s man,’’ not to mention “an unstoppable force, a force of nature, a gale-force wind?’’ A book that introduces Richard Burton as “an irresistible lover, a great raconteur, a rough and randy Welshman, a powerful drinker,’’ then refers not once but twice to his gifts as a celebrated lover, before concluding that “he couldn’t live without Elizabeth, nor could he live with her?’’ Do you start counting the clichés, or do you just give in to them?

Clichés aren’t all that wounds a delicate readerly sensibility here. There is the obsession with Taylor’s “lush cleavage,’’ which is to say her “sloping décolletage,’’ and “voluptuousness.’’ There is repetition to the point of absurdity: Burton drinks “enormous amounts of alcohol’’ twice in three paragraphs and is “increasingly cut off’’ in one sentence and “increasingly isolated’’ in the next.

Yet still I fell for “Furious Love,’’ hook, line and sinker (the temptation of cliché becomes irresistible), and not just because of the “guilty pleasures’’ that accrue to bad Taylor-Burton films and cheesy celebrity biographies. Ultimately “Furious Love’’ is utterly persuasive on the ineffable force of “the most notorious, publicized, celebrated, and vilified love affair of its day,’’ offering a powerful portrait of the ecstasies and travails of overreaching passion and crippled psyches.

Long before Brad and Angelina, there was “Lizanddick!’’ as People magazine mockingly termed them. Though Burton and Taylor also fell in love on the set of a movie, the infamous “Cleopatra,’’ and had to extricate themselves publicly from existing marriages, when it comes to celebrity romance, they leave Pitt and Jolie in the dust. Taylor was one of the most famous movie stars in the world, her fame only exacerbated by her four marriages, the most recent of which involved seducing Eddie Fisher away from America’s sweetheart, Debbie Reynolds. Burton was a distinguished Welsh actor who had already performed on the London stage in the roles of Hamlet, Iago, and Othello, made his name in Hollywood, and triumphed in “Camelot’’ in New York. Was it fated that their love should rival that of Antony and Cleopatra, the roles in which they met? Who knows, but it makes good metaphor.

“Furious Love’’ tells the story of Burton and Taylor’s tumultuous love affair, marriage, divorce, remarriage, reconciliation, and final split, as well as their professional lives over 20 years, in fairly straightforward, if melodramatic, fashion. The authors rely largely on other books and articles, but also upon Burton’s diaries, a handful of interviews, and, most noteworthily, a cache of letters and notes from Burton that Taylor has never before shared. Their passion and pathos make one wonder what biographies will look like when the textual record consists largely of Twitter.

The narrative quickly resolves into round after round of sex, drinking, movie making, jewelry buying, fighting, and more sex, drinking, and fighting. Avoiding settling down for tax purposes, Taylor and Burton lived a peripatetic life in hotels and vacation houses across the United States, Europe, and Mexico, hounded by paparazzi and fans (their crowds recall those that thronged the Beatles, marking the early ’60s as a milestone in the development of celebrity culture). Taylor is both more superficial and more grounded than her lover, sure of what she wants (jewelry, Burton) and happy with what she has (beauty, stardom, Burton . . . at least at first). Burton is the tormented intellectual, a lover of literature, wracked with guilt over leaving his first wife, and deeply ambivalent about being an actor. Yet the book leaves no doubt that their passion for each other was immense and genuine, fueled by an intense physical and emotional connection, admiration for each other’s gifts, and a shared capacity for the prodigious consumption of liquor.

Eventually, as we know, things fell apart. Living their lives in public made it increasingly difficult to be themselves, that is, “Elizabeth and Richard’’ instead of “Liz and Dick,’’ nicknames they both hated. As the Sixties passed into the Seventies, the Taylor-Burton model of conspicuous consumption and old school Hollywood stardom started becoming increasingly obsolete; by the 1980s, “Richard was tragedy and Elizabeth was comedy.’’ Their battles escalated along with their drinking, and eventually Burton’s practically suicidal alcoholism drove a final wedge between them. Except that it was never really a final wedge: Even after they counted three more marriages between them, they still spoke regularly on the phone, and Taylor received one last love letter from Burton days after his death. As she told a Vogue interviewer several years later, “I was still madly in love with him the day he died. I think he still loved me, too.’’ “Furious Love’’ makes you believe it.

Rebecca Steinitz, a writer and editor who lives in Arlington, can be reached at rsteinitz@gmail.com.