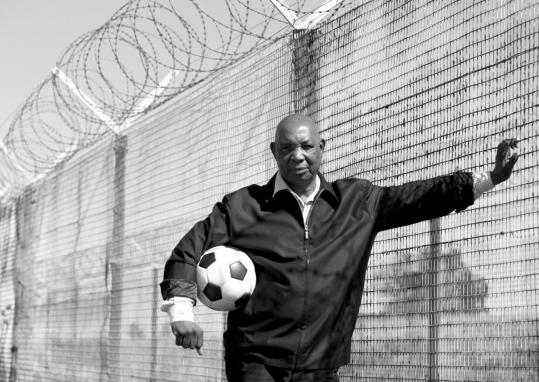 Anthony Suze, shown at the prison in this 2006 photo, spent 15 years locked up and played for the Manong Football Club. (Emielke Photography)
By Bill Littlefield Globe Correspondent / May 30, 2010

For decades before the apartheid regime in South Africa was finally disassembled in 1990, many of the most principled and determined enemies of the state were incarcerated on Robben Island.

There they suffered assaults by sadistic warders, who regarded them as subhuman, labored in a quarry under hideous conditions, and, beginning in the mid-60s, played soccer.

In “More Than Just A Game: Soccer vs. Apartheid: The Most Important Soccer Story Ever Told,’’ Chuck Korr and Marvin Close make the case that organizing and maintaining the prison soccer league increased the confidence, managerial skills, and morale of the inmates. Working together to convince the prison authorities that they should have the opportunity to build a proper field and to wear soccer uniforms rather than prison garb a couple of times a week helped the men to increase their sense of self-respect, and ultimately persuaded some of the guards and administrators to acknowledge the ingenuity, talents, and tenacity of the inmates. Perhaps more significantly, members of the various organizations dedicated to dismantling apartheid learned they could work together.

The story Korr and Close tell acknowledges, albeit sometimes obliquely, an argument with which enemies of various states have struggled: Should political prisoners cooperate in any way with those who hold them captive? Might not any cooperation with the authorities constitute acknowledgement of the legitimacy of the regime, if not its methods?

The men who established the Manong Football Club, Gunners, Rangers, Ditshitshidi, and the other teams that made up the Makana Football Association felt that their duty was to maintain themselves physically, psychologically, and spiritually while incarcerated, so that when they got off the island, they would be fully equipped to take up once again the struggle for the freedom of their people. Playing soccer became an important part of the routine that allowed men like Tony Suze, Harry Gwala, and Jacob Zuma to emerge stronger than ever from confinement and move South Africa toward a more promising future.

It’s not surprising that the Makana Football Association faced extraordinary challenges. On Robben Island, wardens came and wardens went. Some of them enjoyed the games played by the inmates; others cancelled them arbitrarily and otherwise used their power over the men’s recreational opportunities to control and punish them. The first league championship trophy, which was won by the Manong Football Club, was confiscated by the guards.

Despite the uncertainties facing the teams, playing soccer allowed the inmates to feel a connection to the larger community where “people just like them, no matter what their nationality, background, color, race, or creed played the world over,’’ according to the authors. Eventually pressure brought by some of the components of that global community helped to end the insane and criminal system of separatism and persecution that had characterized South Africa.

On a less dramatic scale, the game helped establish connections between people who might otherwise never have learned they had much in common. The guards on Robben Island were poorly paid and overworked. Some of them were illiterate; some were alcoholic. Korr and Close tell the stories of white officers who had never felt anything but contempt and fear in the presence of the prisoners, but who couldn’t resist rooting for one team or another when the soccer league materialized. Some guards came to respect their charges not only for their athletic and organizational skills, but for their work habits, which carried over to their academic studies in the prison. In at least a few cases, guards acknowledged the sorry state of their own circumstances and joined the inmates in classes, thus further demonstrating the potential for brotherhood even in the belly of the beast.

Similarly, before the formation of the Makana Football Association, inmates did not always have easy relations with one other as many were members either of the main opposition party, African National Congress, or rival antiapartheid groups. When the league began, the most successful team was the Manong Football Club, which was the only one to recruit players regardless of political affiliation. It was a lesson not lost on the other teams.

The league faced perhaps its greatest challenge in the mid-1970s when a wave of young prisoners the authors call “the Soweto Generation’’ arrived. When the guards shoved and hit the younger prisoners for not working quickly enough in the quarry, those inmates fought back and got themselves thrown into solitary confinement. “The youngsters showed the elders little respect . . . they suspected that the older prisoners had become stooges of the white man. For many of these new prisoners, the failure to strike back at the warders and the officers meant surrendering any role in the struggle and abandoning hope for change.’’ Peace came only after the older inmates convinced the younger ones that all must gain strength and solidarity in the prison for the greater good of the cause.

That this conflict between generations — one more in the tangled collection of conflicts stemming from party affiliation, class, and the rage and resentments great and small built into any system wherein one race is persecuted by another — could be overcome to the benefit of most of those concerned is testimony to the will, imagination, and patience of all the prisoners involved. That soccer played any part at all in the process may be justification for the contention that this chronicle is “the most important soccer story ever told.’’

Bill Littlefield hosts National Public Radio’s “Only A Game’’ at WBUR in Boston and teaches at Curry College. He can be reached at blittlef@wbur.bu.edu.

MORE THAN JUST A GAME: Soccer vs. Apartheid: The Most Important Soccer Story Ever Told
By Chuck Korr and Marvin Close
Thomas Dunne, 317 pp., $25.99