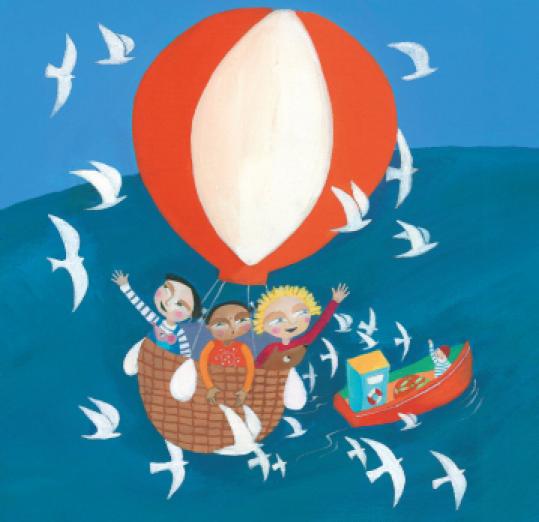 Susan Reed, musician and author of “Up, Up, Up!,’’ will perform Saturday. (Rachel Oldfield Illustration)
May 30, 2010

Barefoot Books, the flagship shop of the children’s publisher, has left Cambridge for bigger quarters in Concord and a new identity. The shop still sells only books from Barefoot’s catalog of more than 400 titles, but it has been re-envisioned as a community center. Among the offerings will be storytelling, art workshops, parenting classes, and yoga for children. Adults can enjoy a cup of coffee at an outdoor café on the premises.

The move is a homecoming of sorts for Nancy Traversy, chief executive of Barefoot Books, the company she cofounded in 1993 to publish multicultural children’s books. She lives in Concord, and her four children attend school there. She wants to create an inviting space for families. (The Bedford Farms ice cream stand across the street is an additional draw.) “Concord is a good Barefoot community,” she said. “It’s obviously very literate and environmentally aware.”

The shop at 89 Thoreau St., across from the train depot, will host storytellers and family concerts Friday through Sunday as part of its grand opening. Details at www.barefootbooks.com.

Island romance
Memorial Day weekend traditionally marks the start of tourist season on islands off the coast of New England. It’s a time when year-round residents accustomed to a slower pace must make adjustments.

A new book looks back at the lives of Art and Nan Kellam, who in search of simplicity and solitude, bought an island in 1948. For nearly 40 years, they were the sole inhabitants of the 550-acre Placentia, 2 miles off the northeastern coast of Maine. Before they died, they entrusted the property to the Maine chapter of the Nature Conservancy. In “We Were an Island: The Maine Life of Art & Nan Kellam” (University of New England), Peter B. Blanchard weaves excerpts from their journals into a narrative of two lives closely tuned to nature.

Mass. writers awarded
May is a prime month for literary awards highlighting Massachusetts authors. The Boston Authors Club has given its 2010 Julia Ward Howe award to “In Her Wake: A Child Psychiatrist Explores the Mystery of Her Mother’s Suicide” by Nancy Rappaport, whose mother took her own life after losing a child-custody battle in 1963. The young-adult award winner is “Lost” by Jacqueline Davies, a historical novel about a young woman who works at the Triangle Shirtwaist Factory in the early 1900s.

The Massachusetts Center for the Book, an affiliate of the Library of Congress, recognized “Woodburner” by John Pipkin, a novel based on a fire caused by Henry David Thoreau and a companion that burned 300 acres of Concord woods; “American Passage: A History of Ellis Island” by Vincent J. Cannato; “This is the Red Door” by poet James R. Whitley; and “Where the Mountain Meets the Moon” by Grace Lin, a young-adult novel that draws on Chinese folklore.

■ “Beautiful Maria of My Soul” by Oscar Hijuelos (Hyperion)

■ “Such Men as These: The Story of the Navy Pilots Who Flew the Deadly Skies over Korea” by David Sears (Da Capo)”

Pick of the week
Jane A. MacKenzie of the Brewster Book Store in Brewster recommends “The Rebellion of Jane Clarke” by Sally Gunning (William Morrow): “This well-told tale, packed with historic details, begins as Jane Clarke rebels against a marriage her father has arranged for her, leaves her home on Cape Cod, and travels to Boston to become the companion to an aunt.”