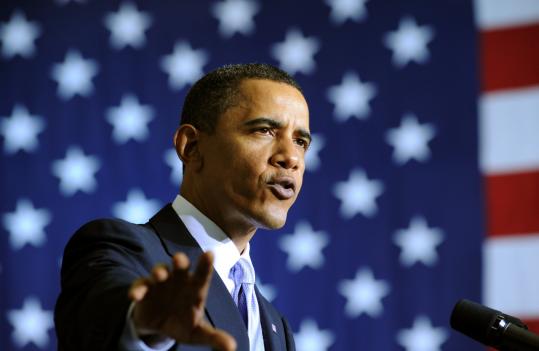 President Obama's first year in office is the subject of "The Promise,'' but the book includes insights from before the election as well as recent months. (Jewel Samad/AFP/Getty Images)
By Carlo Wolff Globe Correspondent / May 18, 2010

Jonathan Alter delivers an engaging, blow-by-blow account of the infancy of the Obama presidency. Although he couldn’t include Obama’s handling of the oil spill, Alter is resolutely current: He updated “The Promise’’ at the last minute to incorporate passage of health care reform legislation in March. Manna for political junkies, Alter’s insider book is a largely admiring chronicle of a disciplined politician whose 2008 presidential drive set a standard for Internet-based, grass-roots organizing.

This thoroughly researched, occasionally critical work humanizes a figure considered periodically out-of-touch even by some of his admirers. “Even as he succeeded substantively,’’ Alter writes in the epilogue, “Obama was struggling with his tone.’’ Even Obama supporters concede that, while he grappled with daunting issues such as the recession and wars in Iraq and Afghanistan, he often failed to connect on a visceral level with the man and woman on the street as well as he did in his campaign.

That triumphant drive serves as a kind of contrast to a nuanced portrait of a man who took office loaded with high expectations and shortly realized that presiding over a divided electorate is much harder than running for president.

Alter’s tale of the Obama presidency begins before the election even takes place. Months before taking the oath of office, Alter suggests, Obama effectively took control of the economy. He offers an account of a meeting in late September 2008 to hash out details about the Troubled Asset Relief Program, the Bush administration’s response to the Lehman Brothers default. The key players were President George W. Bush, Republican presidential nominee Senator John McCain, Treasury Secretary Henry Paulson, Representative Barney Frank of Massachusetts, a fierce Paulson critic and chairman of the House Financial Services Committee, and Senator Obama.

“By this time the molecules of power in American politics were in a rapid state of realignment,’’ writes Alter, a Newsweek columnist and MSNBC commentator. “McCain’s absence from the discussion was stark. Bush, who was supposed to be leading the meeting, was poorly informed and detached. ‘He’s already in Crawford,’ whispered one Republican. That left the skinny African-American guy who had crashed into their world only three and a half years earlier. He was the only one of the big dogs who seemed to know what he was talking about.’’

Obama always knows what he’s talking about, Alter indicates, tracking the president’s early accomplishments: displaying tremendous political savvy in persuading former rival Hillary Rodham Clinton to be secretary of state; enacting the $787 billion stimulus program; defusing the “don’t ask, don’t tell’’ prohibition against gays in the military; decisively committing more troops to Afghanistan; overcoming the objections of his combative chief of staff, Rahm Emanuel, to pushing health care reform; and steering the bailouts of the automotive industry and banking, actions that could cost the Democratic Party in November’s midterm elections.

While he serves up plenty of politics and policy, Alter also can be cutting and funny: “On good days [National Economic Council director Lawrence] Summers was nearly as brilliant as he thought he was,’’ he writes in a chapter contrasting the styles of Summers and the more self-effacing, workmanlike Treasury Secretary Timothy Geithner. He can be critical, too, scoring Obama for failing to impose stricter conditions on bailed-out banks and for hewing to a bipartisanship that rarely surfaced in major legislation: “Tyrannosaurus Rx’’ is his witty title for a chapter on the sausage-making behind health insurance reform. “Obama and the Democrats had to explain why the country needed to spend a trillion dollars today to save trillions of dollars tomorrow,’’ Alter writes. “It was a hard sell.’’

It still is. Nevertheless, Alter suggests that the passage of that legislation is representative of the kind of doggedness and vision Obama has displayed thus far in his first term. He ends with a flourish of trumpets, noting that even though Obama “won ugly’’ on health insurance, that put him in the same league as Franklin D. Roosevelt and Lyndon Johnson in terms of domestic achievement.

Time will tell; it’s a safe bet, however, that Alter will be around to track and interpret the developments.

Carlo Wolff, a freelance writer from Cleveland, can be reached at carlo.wolff@gmail.com.