Of hearth and home 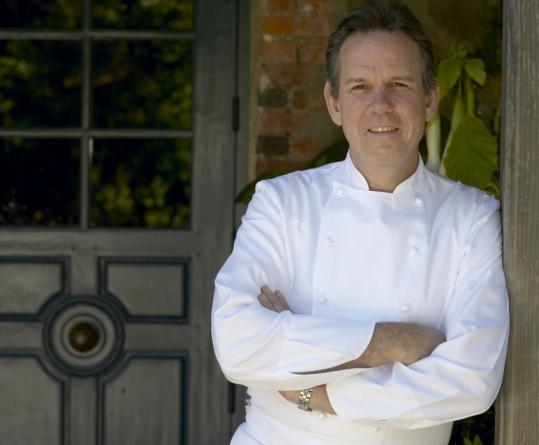 “What I want to do is try to teach people how to cook. . . . You do what you do and other people will interpret it in ways you can’t think about,’’ says chef Thomas Keller. (Deborah Jones)
By Devra First Globe Staff / May 12, 2010

Thomas Keller is one of the country’s best-known chefs, the man behind such lauded restaurants as California’s French Laundry and New York’s Per Se. But there’s more to him than the high end. He has a casual, family-style restaurant called Ad Hoc, and his cookbook “Ad Hoc at Home’’ just won a James Beard Award. We spoke with Keller about home cooking, fine dining, and the dishes dearest to his heart.

Q. This book is for home cooks, so: What does one need to do to become a great home cook?

A. Practice. It’s like anything. We’re always thinking, Let’s do something new. What’s the next thing? That’s not how you become good at something. You don’t become a good writer because you’re always trying to write a different way. You learn the fundamentals of the English language and practice every day. Baseball players practice every day, violinists practice every day. You can’t expect to go into a home kitchen and bang out an incredible meal your first time. Go in and practice your skills. It’s really a very fundamental process. Repeat repeat repeat.

Q. Where do you see fine dining going in the coming years?

A. I think fine dining is about luxury. It’s about being pampered. That’s what it’s been about from the beginning, in the 1700s when all the chefs in the French court were out of work because of the revolution, and they went out and opened restaurants. It’s about service, being taken care of, your wish being anticipated by somebody else and being delivered before you want it. . . . Fine dining today is the same thing as before, but it evolved. It became more modern, more refined. The food is much better. The techniques are much better. It’s an evolution, but the core of fine dining remains the same.

Q. What dishes are dearest to your heart?

A. Roast chicken is something very close to my heart. I love simple foods — really good salads, really good soups. Beef stroganoff my mother made when were children. It was one of the few dishes she ever made for us. I love hamburgers.

Q. You’ve talked about opening a burger restaurant. Do you think it will ever happen?

Q. Do you think about your legacy? Because you’re the guy who came up with visionary dishes like “oysters and pearls,’’ oysters topped with caviar on tapioca in sabayon. And then you’re the guy who taught thousands to roast chicken at home at a high temperature with little more than a generous sprinkle of salt. Are these two halves of a whole?

A. I think it’s all the same. What I want to do is try to teach people how to cook. Legacy is important. Legacy will be defined by other people. You do what you do and other people will interpret it in ways you can’t think about.

Q. So you’d be happy to be the guy who taught America to roast a chicken.

A. I would be. It’s simple, it’s satisfying, it’s nurturing.