The book on knitting 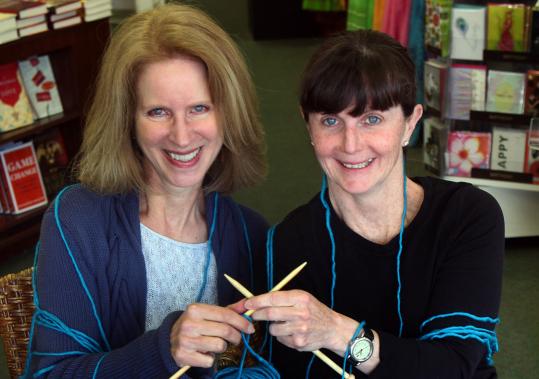 A knit-a-thon evokes the sound of needles gently clicking for hours while sweaters, caps, and scarves pile up. But Saturday’s knit-a-thon at Wellesley Booksmith, the second the store has held, also includes panel discussions, demonstrations, and book signings by some of New England’s fiber arts stars (yes, knitting has its celebs, too). That day, the store will also host a charitable book fair benefiting Women of Means, which provides free health care for homeless women and children. Lee Van Kirk, events coordinator at Wellesley Booksmith and knit-a-thon organizer, and Kathleen “Kit’’ Mitchell, a Wellesley knitwear designer, looped us in on the event.

Q. The event includes a panel discussion on charitable knitting. What is that?

Van Kirk: It can be very broadly defined. Our speakers this time include people who actually go to Guatemala and work in an orphanage. One of the panelists said that there’s an expression that charity begins at home, and she’s taking that approach and talking about gifts that can be good to give as a charitable donation or to a friend. It runs the whole gamut.

Mitchell: Knitters like to knit no matter what and very often run out of people to give sweaters and hats and mittens to. So, very often, a knitter or a knitting group will kind of adopt a cause, whether it’s beanies for preemie babies or knitting afghans for Afghanis . . . whomever seems to be a group in need. It becomes a mechanism for the knitters to knit with a purpose.

Q. Are the panelists and presenters at the event sort of a who’s who of knitting?

Mitchell: The speakers are a great draw. Kristin Nicholas is — I don’t know if she would like this term — but I would call her a guru of knitting. She’s a wonderful physical presence. Jill Stover, I would say the same for her. She does some great work in Guatemala in needle felting [which involves using needles to work wool into different objects]. Wren Ross [an actor, singer, and knitter] is dynamic and colorful. She sings and does ballads that all revolve around knitting.

Q. Does she knit while she sings?

Van Kirk: She’ll play the guitar and sing. One of the things she’s done is she’s converted a lot of blues songs by changing the words so they’re about knitting. She invites people to talk about their mistakes and foibles, and it becomes quite a dynamic session.

Q. Lots of knitting groups seem to meet in bookstores. Is there some kind of a natural fit?

Q. Does a knit-a-thon ever get rowdy?

Mitchell: It might get kind of loud, depending on the crowd, but I wouldn’t call it rowdy. That would be when the wine comes in.