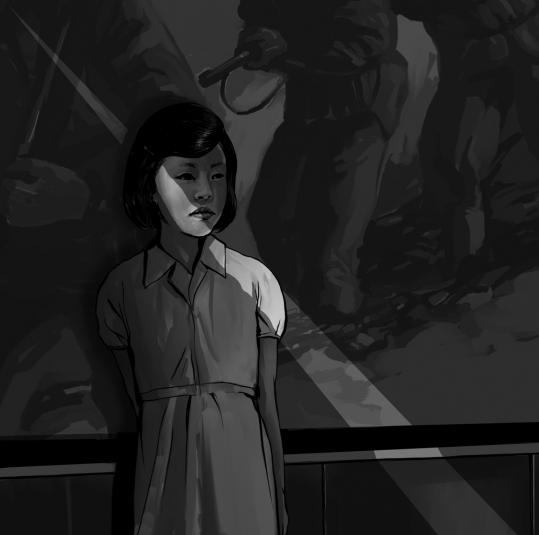 In the middle of the “The Surrendered,’’ but early on in its chronology, a Japanese officer brutalizes his prisoner, a young Kuomintang agent. It’s Manchuria, 1934. Like all torturers, the officer believes that pain begets truth. He tells his victim, “You are a worthless human being! Do you hear me? Less than that! Not even a rat! A piece of dung! You are nothing! You will make no difference. You will not be remembered.” And then he slices off his prisoner’s eyelids. And the interrogation and the insanity continue.

How do we make sense of the irrational, of the madness and depravity of war? We don’t make sense. We make art. In his impassioned and expansive new novel, Chang-Rae Lee does just that - he expresses the inexpressible and articulates the unspeakable. He asks the crucial and abiding questions: What do we owe to the dead and the dying? How do we live a kind and decent life in this woeful world? Or at least a life not unkind and indecent?

This is a harrowing tale, make no mistake. It is often bleak and distressing. But as it examines the unfortunate human aptitude for barbarity and betrayal, it also extols our determination to survive.

“The Surrendered’’ is a scrupulous exploration of three broken lives. The novel is epic in scope, masterful in execution, heart stopping at times, and heartbreaking at others. The meticulous narrative unfolds over 52 years and across three continents. Nothing is rushed; nothing is overlooked. We can even feel the buzz of a window pane on our fingertips as rumbling Japanese military vehicles approach along a gravel road.

Hector Brennan is a handsome loner, a brawler, “rootless and unstrung,” a night custodian at a Korean minimall who spends his considerable free time drinking at Smitty’s Below the Bridge. It’s Fort Lee, N.J., 1986. Hector has recently met and fallen, in his cautious manner, for Dora, another Smitty’s habitué, and realizes that his muddled life may now have purpose and value. Love defies disorder, and enduring love redeems.

When Hector was a soldier on cemetery detail in the Korean War, he met a starving young orphan on a refugee road. He gave June Han chewing gum. She followed him at some distance, and he led her to an orphanage in Yongin where they would each spend several years, June as a rather fearsome and aggressive child, Hector after the war as a handyman, numbed by the atrocities he has witnessed.

And now June, whom Hector has not seen in 19 years, intrudes on his life. She’s dying of cancer and needs to find her estranged son in Italy. Hector wants nothing to do with June or the son, Nicholas. And here we come to the one thin part of the plot: a pair of convenient deaths, an unwritten scene of persuasion, an implausible act of fraud. Hector and June fly to Italy.

Their search for Nicholas becomes a journey into their mutual past, into the heart of their reciprocal darkness. We’re back at the orphanage run by Ames and Sylvie Tanner, American missionaries. Sylvie was there in Manchuria in 1934 in the room with the Japanese officer and his victim. She lives with horrendous memories. She witnessed the torture and murder of her missionary parents. She has suffered five miscarriages. She’s fragile and adrift, married but solitary. She’s adored by the orphans and forms a special bond with June. She loses herself, as much as she can, in her teaching and nurturing.

Hector falls in love with Sylvie and contends with June for her attention. Sylvie endures bouts of melancholy and alleviates her pain with narcotics and with ardent, surreptitious lovemaking with Hector. She reads and treasures “A Memory of Solferino,’’ Henry Dunant’s unflinching account of the needless suffering of the wounded in the aftermath of a decisive battle for Italian unification in the 19th century, a book that led to the birth of the International Committee of the Red Cross.

Lee’s narrative strategy is to leap ahead to a significant moment in time and then to reveal the preceding details little by little, and in this deliberate fashion the story intensifies; the past is re-envisioned; and present circumstances are clarified. We learn the devastating truth about the destruction of the orphanage, and it is not the truth as we, and Hector, had understood it. We learn about Hector’s marriage of convenience to June, about their five months of cohabitation and their single night of intimacy that resulted in the prodigal son whom Hector has never met.

After they find Nicholas, June says, they’ll all go to the Ossuary Chapel at Solferino where she can pay homage to Sylvie and to all lives shattered by war. At journey’s end, June is unable to walk and is only intermittently coherent, but soldiers on with hope and morphine, nursed and indulged by Hector, who has promised he will not leave her until the end. To the dead we owe remembrance, to the dying, mercy and surrender. Mercy is the only true deliverance. That’s what Sylvie’s mother always told her.

“The Surrendered’’ is a dream you can’t quite wake up from. You close the book, shut your eyes, and there’s little June still running for a train, trying to save her fractured life. Again, you feel a keen anguish. Lee understands that in art and in stories what is perhaps most valuable is not what can be explained but what can be felt.

John Dufresne is a novelist and author of “Is Life Like This?: A Guide to Writing Your First Novel in Six Months.’’