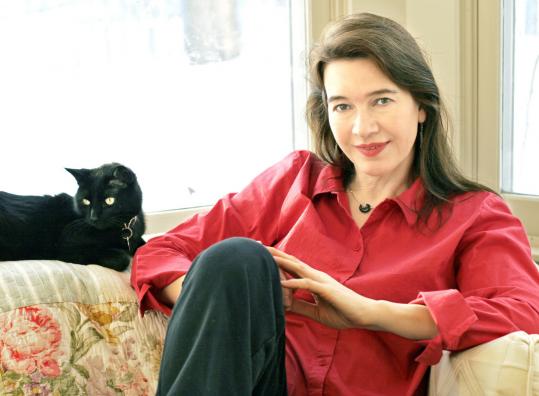 In “Shadow Tag,’’ Louise Erdrich looks at the lives of a middle-aged couple, Gil, a painter, and Irene, a doctoral student. (Bettina Strauss)
By Perrin Ireland Globe Correspondent / January 31, 2010

The news about Louise Erdrich’s latest novel, “Shadow Tag,’’ is that it’s a departure from her previous work, and an exciting one. Erdrich is the author of 13 novels, three poetry books, a collection of short stories, five children’s books, and two works of nonfiction, for which she has received significant critical acclaim (National Book Critics Circle Award for her first novel, “Love Medicine,’’ National Book Award Finalist for “The Last Report on the Miracles at Little No Horse,’’ and Pulitzer Prize finalist for her last novel, “Plague of Doves’’).

She has achieved bestseller status as well with work marked by beautiful language and sometimes complex sagas involving multiple narratives and generations, as well as a Faulknerian sense of place. With the more straightforward “Shadow Tag,’’ which doesn’t skimp on depth, characterization, or plot, Erdrich is likely to pick up even more readers, including the sort who admire the spare prose and contemporary urban settings of Lorrie Moore, Mary Robison, and Amy Hempel (with whom Erdrich shares seductive descriptions of dogs, who are “emotional savants.” Readers will also be drawn to “Shadow Tag’s’’ pacing, which nudges Erdrich’s lyricism into thriller territory. While the writing is fiercely disciplined, with a poet’s polish, every line is unpredictable.

The novel presents a portrait of a marriage faintly reminiscent of “Who’s Afraid of Virginia Woolf?” although the attacks, requiring no audience, are less frontal (with alcohol muffling, rather than inflaming), and the cruelty intertwines with tenderness. Here, too, we find academically-oriented spouses sparring (and if arty, intellectual couples irritate you, this book is not a good choice, unless you relish characters and authors who can laugh at themselves). Here, too, arguments sometimes reach the level of beloved sport. “They argued sometimes for comfort.”

Irene and Gil (who share Native American ancestry) have three children, who are wise to the ways of adults, and live in Minneapolis, where Gil is a painter and Irene has returned to her doctoral dissertation about 19th-century artist George Catlin, who painted (exploited?) Native American subjects.

Exploitation is a major theme in the book, particularly since Irene is Gil’s sole subject, and he has painted her for years in a variety of attitudes and positions, some of them pornographic and humiliating, and earned a handsome living through his efforts. Irene’s last name, from her Native American side, is America. The book’s title comes from a Native game Irene has taught the family, in which the objective is to step on someone else’s shadow, which is equated with the soul.

For her part, Irene, when she realizes Gil has been reading her red diary, plants disturbing lies in it, while beginning another, truthful (blue) diary she keeps in a safety deposit box in a bank. Her brilliant manipulation of Gil contributes to the page-turning, mind-game suspense of the novel, with its escalating revelations of violence.

Love is complex, obviously, muddled as it is by need, sex, and hate, and nowhere have love’s complications been better illustrated than in the raw honesty of “Shadow Tag,’’ where the parents coalesce around the intensity of their love for their children, on whom they shower affection, except when they don’t. The subtlety with which Erdrich leads us into recognition can be masterful: Stoney, the 6-year-old, draws frequent pictures of his mother. “In every picture, at the end of his mother’s hand, Stoney drew a stick with a little half-moon on the end of it . . . ‘Look,’ said Irene, . . . ‘There’s this thing on my hand, like another appendage, it’s always there . . . What is it, Stoney?’

As Irene’s alcoholism progresses, she realizes it could keep her from gaining custody of the children in the divorce she concludes she wants, and we learn that the lies in the falsified red diary have a purpose beyond punishing Gil, even as they illustrate her inability to act directly.

Irene’s mother raised her on Shakespeare - “Hamlet,’’ “Macbeth,’’ “King Lear.’’ “None of the comedies, of course. They were Indians.” But Erdrich has a gift for combining tragedy with comedy, and in a marital counseling session, Gil expresses his idea that he and Irene are separated by the equivalent of the Korean Demilitarized Zone:

“I see Irene and myself on opposite sides of the DMZ, cut off by razor wire, sharp defenses, intelligence, if you will. Between us there is a strip of longing and love that belongs to both of us, untouched . . . The red-capped crane is there, symbol of peace.”

“I don’t think the red-capped crane is the symbol of peace,’’ said Irene. “. . . What if one of us develops nuclear weapons?”

“So I’m freaking Kim Jong Il with the weird haircut and those crazy totalitarian mass games?”

Readers who seek parallels in authors’ novels and lives may turn thoughtful at the book’s extraordinary, metaphor-rich ending, which, while organic and (retrospectively) inevitable, still stuns, and breaks your heart. For decades, publicists and blurb writers have tried to hawk books by claiming they are “literary page-turners.” “Shadow Tag’’ is the real thing - a fast-paced novel of exceptional artistic, intellectual, and psychological merit.

Perrin Ireland is the author of the novels “Ana Imagined’’ and, most recently, “Chatter.’’