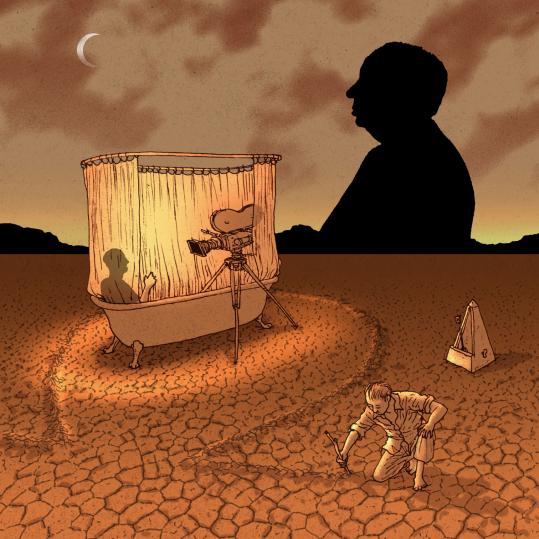 An academic, hired by the Defense Department to “conceptualize” the Iraq War. A struggling postmodern filmmaker who visits the academic in his desert retreat to enlist him as the subject of a documentary. Hitchcock’s “Psycho” slowed down to run at two frames a second, or some 24 hours in all, in an installation at New York’s Museum of Modern Art.

All three figure in Don DeLillo’s spectral, difficult, and sometimes brilliant novel, “Point Omega.” They are linked, but that is to overstate the clarity; it would be truer to say that they haunt each other.

DeLillo’s major novels - “White Noise,” “Libra,” “Underworld” among them - feature vivid narratives and characters that are partly ideas: public ideas, and for the most part, excoriating. In “Point Omega” the characters are translucent wraiths, and the story a bare sketch; it is the ideas that are the actors. The closest resemblance may be to Albert Camus’ philosophical monologues in such novels as “The Fall.”

The ideas in “Point Omega” have to do with the leaching of material human reality by the manipulated abstractions of modern life. They radiate, sometimes obscurely, from the book’s burning and not in the least obscure core: the scathing recollections and reflections of 73-year-old Richard Elster after his time as a pet Pentagon intellectual.

These are elicited by Jim Finley, intent on making a film that shows, using the trendiest of pared-down techniques, nothing but Elster talking into the camera. No questions, no charts, no camera angles: just the man himself and, as the only inflection, a blank gray wall behind him. Finley expects to stay two or three days at Elster’s decrepit cabin in the Arizona desert. Instead, sucked into the vortex of Elster’s desolate musings and the related desolation of the sun-blasted desert, he ends up staying for weeks.

In Elster’s account of his Pentagon work, DeLillo has fashioned a miniature war novel: instead of shooters, thinkers; instead of death-dealing battle, death-dealing ideas. In this section the writing stands with his sharpest and most terrible.

“Their war is abstract. They think they’re sending an army into a place on a map,” Elster recalls of the military planners. The so-called defense intellectuals do worse (he shuns comparison with Paul Wolfowitz, thus making the comparison evident). “There were times when no map existed to match the reality we were trying to create.’’

He adds: “There is no lie in war or in preparation for war that can’t be defended. We went beyond this. We tried to create new realities overnight, careful sets of words that resemble advertising slogans in memorability and repeatability. These were words that would yield pictures eventually and then become three-dimensional. The reality stands, it walks, it squats. Except when it doesn’t.”

Thus today’s version of the French trahison des clercs, or betrayal by the intellectuals. Appropriately, Elster’s recruitment followed his publication in an academic journal of a learned and flowery etymology of the word “rendition.” The Pentagon read it and hired him - in one of DeLillo’s lethal phrases - to “freshen the dialogue.”

Not so much repentant as fed up, Elster has moved to the blazing emptiness of the desert to “reclaim the body from what he called the nausea of News and Traffic.” Intellectually arrogant as ever, he proclaims emptiness as truth. The reality of life is not events but a hangnail, or waiting for dinner.

Thus Elster as DeLillo’s target. But as he goes on he seems, somewhat confusingly, to become DeLillo’s voice as well. The death-dealing intellectuals in the Defense Department are only an instance of a wider extinction brought about by technological progress that abstracts the material and human world and eventually destroys it (those armies launched upon invented maps).

The title’s “Omega (ending) Point” is upon us; the human consciousness, rooted in our carnal selves, is exhausted. “Back now to inorganic matter,” Elster declares. “We want to be stones in a field.”

As argument this has become fairly hazy. Nevertheless, DeLillo has constructed the entire novel to suggest the disappearance of the materially human. Elster’s daughter, Jessie, comes to stay; Finley feels an attraction that remains too intellectualized to act upon.

Jessie herself is an internal disappearance. “Her look had an abridged quality; it wasn’t reaching the wall or window,” Finley reflects. “She was missing, fixed tightly within.” Her father recalls that as a child she would keep touching her face to make sure she was there. “She was imaginary to herself.” And when she actually disappears, mysteriously, her absence is more real than her presence.

Finley’s own material self is tenuous. His film project is riskily theoretical (why would anyone want to see a monologue by a has-been defense intellectual, demands Jessie, briefly asserting herself). After a couple of weeks he loses interest in it, falling under the spell of Elster’s nothingness discourse.

The introductory section and the epilogue, both dealing with the slowed-down “Psycho,” are beautifully written, with their description of how this drastic slowing quite alters the impact of the film. The rattle of the shower-curtain hooks becomes as compelling as the stabbing; the point seems to be that this intellectualized avant-garde experiment has removed the film’s blood and horror in a fashion akin to the intellectuals’ conceptualizing of the Iraq War.

For the reader, though, making the connection is hard going, even though Finley is there watching the film with a near-mystical attachment. From time to time in the main body of the book, DeLillo’s leaps and elisions have the suggestive force of poetry. Here, especially in the epilogue, they bewilder more than they suggest.