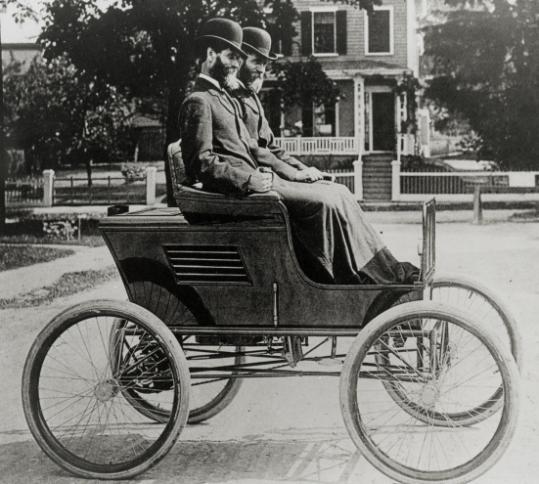 The Stanley twins motor down Hunt Street in Watertown in their first steam car in 1897. The brothers had moved their business from Maine to the Bay State in 1890.
By Jan Gardner Globe Correspondent / January 10, 2010

Throw a stone in Cambridge, and chances are you will hit a writer of some note. This kind of star power shines through in “Cambridge Voices: A Literary Celebration of Libraries and the Joy of Reading,” an anthology put together by the Friends of the Cambridge Public Library to celebrate the central library’s expansive addition.

Nearly 50 writers with ties to the city - from Ben Affleck and Matt Damon to Junot Díaz, Robert B. Parker, and Alice Hoffman - contributed essays or excerpts from their works. Sage Stossel, who shares a delightful tale of magic and mischief in the stacks, illustrated the book.

Among the standout selections are Callie Crossley on the segregated libraries of her childhood in Memphis, Judith Nies on the secret lives of books with “sexy parts,” and Elijah Wald on the stolen moments that introduced him to a world of music and set his course in life.

The memories offered up throughout “Cambridge Voices” (including several by writers for The Boston Globe) pay tribute to the life-changing properties of books, librarians - and having a home away from home. Harvard history professor Jill Lepore brought her two oldest children to the library every day when they were young. “But I confess it: I didn’t go there just to read. I went to get out of the house,” she writes. “I went to go someplace, anyplace, where I could sit among books, away from sippy cups and diapers and, maybe, just maybe, find a minute to think clearly.”

Going full steam
If steam power had outdone internal combustion in the early days of automobiles, Francis and Freelan Stanley might have been the Wright Brothers of the four-wheeled world.

Karen H. Dacey tells a story of entrepreneurial ambitions and failure in “The Stanleys of Newton: Yankee Tinkerers in the Gilded Age,” recently published by the Stanley Museum in Kingfield, Maine. In 1890, the 41-year-old twin brothers moved their business from Maine to Massachusetts to pursue their dream of perfecting a horseless carriage. Francis Stanley died in 1918 when he crashed his steam-powered car, not long before the Stanley Motor Carriage Co. went out of business.

From sea to land
Two of the foremost chroniclers of New England maritime history have staked out new turf for their next books. Nathaniel Philbrick, who lives on Nantucket and won a 2000 National Book Award for “In the Heart of the Sea,” traveled the American West to research “The Last Stand: Custer, Sitting Bull, and the Battle of the Little Bighorn” (Viking), forthcoming in May. Marblehead resident Eric Jay Dolin, who won acclaim for the whaling history “Leviathan,” has written another sweeping narrative, “Fur, Fortune and Empire: The Epic History of the Fur Trade in America” (Norton), being published in July.
Coming out
■ “A Yank Back to England: The Prodigal Tourist Returns” by Denis Lipman (Gemma)

■ “The Wisdom of a Broken Heart: An Uncommon Guide to Healing, Insight, and Love” by Susan Piver (Free Press)

■ “Brace for Impact: Miracle on the Hudson, Survivors Share Their Stories of Near Death and Hope for New Life” by Dorothy Firman and Kevin Quirk (Health Communications)

Pick of the week
Anita Silvey, editor of “Everything I Need to Know I Learned from a Children’s Book,” recommends “Crossing Stones” (Farrar, Straus and Giroux): “Author Helen Frost explores the effects of World War I - as well as the suffragette movement and the 1919 flu epidemic - on two midwestern families. Told in carefully-structured verse, the page-turning story captures a rare time in history for young readers, seen from the eyes of several engaging protagonists.”