Agassi serves up honesty in memoir

After I’m only a handful of pages into Andre Agassi’s memoir, “Open,’’ I feel as if it’s already 40 for Agassi, love for the reader. This extended, occasionally lyrical and salty love song to tennis has velocity, verve, and power. Venom and tone, too.

Agassi’s endearing tell-all, written with Pulitzer Prize winner J.R. Moehringer, tracks the winner of 14 Grand Slam titles from his childhood under the thumb of a domineering father to his current life as an elder statesman of a sport about which he’s maddeningly ambivalent and head of an innovative charter school for troubled kids in his native Las Vegas.

Among the book’s revelations:

■ Agassi snorted crystal meth for a time in 1997 and 1998 and, when busted for a tainted urine sample by the Association of Tennis Professionals, lied about it. He was cleared.

■ Agassi has no love for rivals Boris Becker (who recently blogged with sanctimonious dismay about Agassi’s drug use) or his greatest opponent, Pete Sampras, whom he tellingly dismisses as a piker. (Sampras again beat Agassi in an exhibition match in Macau in October. Their prior record, notched in epic battles in the ’80s and ’90s, was 20-14 in favor of Sampras, including 4-1 in Grand Slam finals.)

■ For years, Agassi wore a hairpiece. It was only in the late ’90s that he came to accept, even embrace, his baldness.

■ The former champion insists that he hates tennis. Despite that, like his second wife, Steffi Graf, he lives for it.

■ Press speculation, notwithstanding, the presence of then-president Bill Clinton at the 2001 French Open had nothing to do with Agassi losing concentration in his loss to Sébastien Grosjean. Anxiety about Graf’s pregnancy with their first child was the main distraction.

Agassi details his years-long battle to become his own man, escaping the shadow of his tyrannical, punitive dad and early trainer Nick Bollettieri to find his own mentors in Gil Reyes and Brad Gilbert, men who saw beyond the meal ticket.

He also learned to listen to his heart, divorcing chilly Brooke Shields and eventually marrying the warmer, more simpatico Graf. Clearly the first marriage reflected how out of touch Agassi was with himself:

“Before we leave the church, a decoy bride, a stand-in for Brooke, leaves first. To throw the paparazzi off the scent. The first time I heard about this plan, I tuned out, refused to pay attention. Now, as I see the Brooke look-alike leaving, I have a thought no man should have on his wedding day: I wish I were leaving too. I wish I had a decoy groom to take my place.’’

Some might consider this heartless. It’s certainly tabloid fodder, even 12 years after the fact. But it’s of a piece with Agassi’s truthfulness and lack of self-censorship, a trait that often got him in trouble with tournament officials who wouldn’t tolerate his creative use of obscenity.

It also fits with Agassi’s accounts of great matches, including ones with the unrelated Beckers, Boris and Benjamin, Ivan Lendl (who nailed him early on as a “haircut and a forehand’’), and, in the later years, Rafael Nadal and Roger Federer. Some accounts leave the reader as breathless as Agassi himself.

In the acknowledgments, Agassi cites collaborator Moehringer in his inner circle along with Agassi’s wife and their kids, Jaden and Jaz. He hopes his story turns them on to the “magic’’ of books, which Agassi missed as a ninth-grade dropout. Not a problem: “Open’’ is a unique, winning combination of drive and warmth that’s also great fun to read.

Carlo Wolff is a freelance writer from Cleveland. 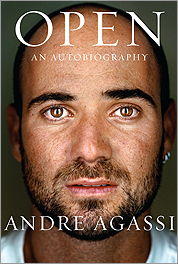