Up an ugly river 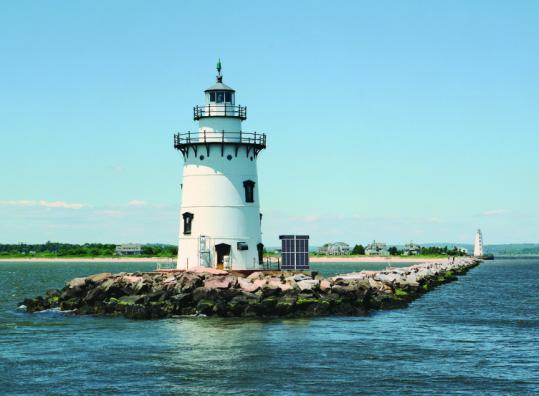 The Connecticut River flows for 410 miles until it empties into Long Island Sound at this lighthouse on Saybrook Jetty. (Al Braden)
By Jan Gardner Globe Correspondent / November 22, 2009

The Connecticut River starts as a trickle up in northern New Hampshire. For 410 miles, it wanders through the heart of New England before emptying into Long Island Sound.

Photographer Al Braden celebrates the beauty of the river as well as its role in the region’s industrial development in his new book, “Connecticut River’’ (Wesleyan).

Along the way he points out that, in violation of federal standards, a billion gallons of sewage-laden water are dumped into the river annually by Springfield, Holyoke, and Chicopee.

The federal lawsuit that forced the cleanup of Boston Harbor comes to mind in an afterword by Chelsea Reiff Gwyther, the executive director of the Connecticut River Watershed Council. She writes that “failing sewage collection and treatment systems’’ pose the biggest threat to the river’s health, adding “It doesn’t have to be this way.’’

Vampires lampooned
The Harvard Lampoon has set its sights on the wildly popular “Twilight’’ series by Stephenie Meyer. “Nightlight’’ (Vintage) is the Lampoon’s first parody of a novel since “Bored of the Rings’’ 40 years ago. After Belle Goose moves from Phoenix to Switchblade, Ore., to live with her father, she latches onto Edwart Mullen, a computer nerd at her new school who happens to be a vampire.
$50,000 honor
Salvatore Scibona, juggling his job at the Fine Arts Work Center in Provincetown and work on his new novel, has hit the jackpot. He was one of 10 emerging writers to be honored last month with a $50,000 grant from the Whiting Foundation. “I won’t have to live in dread of expenses like the timing belt on my car snapping,’’ Scibona wrote in a recent e-mail.

Last year Scibona’s debut novel, “The End,’’ set in an Italian immigrant community in Cleveland during the first half of the 20th century, was nominated for a National Book Award. During the 10 years he spent working on that book, he was lucky enough to land a paid residency at the Fine Arts Work Center. Freed from the need to make a living, he savored the opportunity to hunker down off-season in a quiet town at the end of the world.

Books for show
A poem can pack more punch when it is rendered as a three-dimensional work of art. That is the impetus for “Somewhere Far From Habit: The Poet & the Artist’s Book,’’ on display at the Pierre Menard Gallery in Cambridge through Dec. 5. The exhibition brings together the work of 30 poets and book artists, including Pulitzer Prize winner Natasha Trethewey and Audrey Niffenegger, author of “The Time Traveler’s Wife.’’

The artists’ interpretations of the poems take on a multitude of forms. Richard Minsky, founder of the Center for Book Arts in New York, employs a 20-gauge shotgun, a noose, and other deadly objects to illustrate three poems about suicide and execution but the other artists have a lighter touch.

Coming out
■ “A Truth Universally Acknowledged: 33 Great Writers on Why We Read Jane Austen,’’ edited by Susannah Carson (Random House)

Pick of the week
Lisa Sullivan of the Book Cellar in Brattleboro, Vt., recommends “Lit’’ by Mary Karr (Harper): “This follow-up to Karr’s earlier memoirs, ‘The Liar’s Club’ and ‘Cherry,’ deals with alcoholism, recovery, motherhood, faith, and becoming a writer. This devastating and ultimately hopeful book made me laugh, cry, and root for the author.’’