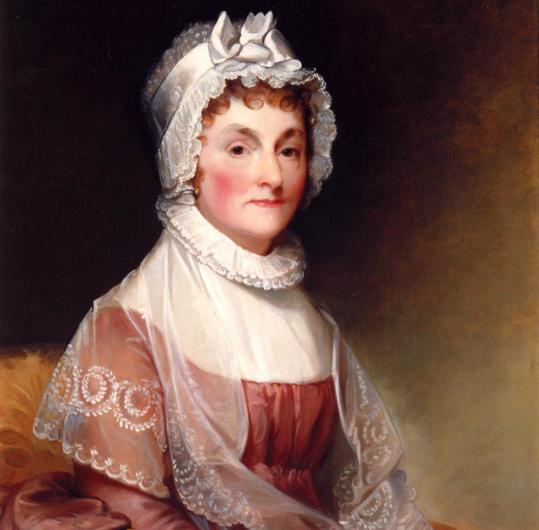 On the Fourth of July 1956, trustees of the Adams Manuscript Trust gave the vast collection of family papers to the American people. At once, the Massachusetts Historical Society and Harvard University Press set out to microfilm and publish the numerous diaries, correspondence, and other documents. Since then, many scholars have studied the Adams Papers, as they are known, seeking fresh insights into the family’s brilliant but often anguished lives and careers.

Woody Holton’s new book stands as a prime example of the kind of riches still being mined from the collection. Holton’s subject is the one which biographers most often have chosen from the four generations of Adamses. This favorite has not been a male. It is Abigail Adams. The fascination with her arises from much more than her role as wife of John Adams or as the matriarch of distinguished descendants. Abigail’s presence in the papers attests to such talent and influence as to give her life a significance exceeding that of most of her contemporaries.

Now comes this splendid biography by Holton, a University of Richmond history professor. What gives Holton’s work fresh significance is that his perceptive scouring of the Adams Papers leads him to explore an aspect of Abigail’s life that other biographers either have overlooked or chosen to ignore. Holton presents an Abigail who is a financial manager, an investor, even a speculator. Furthermore, this activity was often carried on in the face of her spouse’s alarm and objection. Nevertheless, Abigail usually proceeded with her various enterprises. Among others, these included importing European merchandise for resale; speculating in Vermont acreage; and buying government securities at deep discount. In circumstances where she feared her name or her gender might hinder success, she employed a representative.

Alongside this discovery, Holton still manages to cover every part of Abigail’s story. At times, readers may be a bit confused by the author’s determination to honor Abigail’s campaign for gender equality. There are paragraphs in which both John and Abigail are referred to as “Adams,’’ leaving us momentarily to wonder which one Holton had in mind. This is only a small hazard, however, where every page is packed with detail about Abigail’s career. Her story is all here, beginning with young Abigail Smith setting out from Weymouth’s parsonage with her two sisters, Mary and Elizabeth.

The narrative continues with each sister remaining a strong presence while Holton introduces an array of other characters from within and beyond the extended Adams-Smith family. It is Abigail, of course, who soon presides as a sort of empress ruling the South Shore. Her talented and observant daughter-in-law, Louisa Catherine, wife of John Quincy Adams, left the best description we have of Abigail’s presence in the family, calling her “the guiding planet around which all revolved, performing their separate duties only by the impulse of her magnetic power.’’ This role continued whether Abigail was at home in Quincy or accompanying John in Philadelphia, New York City, Paris, London, or the miserable village of Washington, D.C. And when her son John Quincy was abroad as a diplomat, her counsel kept up with him, even as far away as St. Petersburg, Russia.

Holton, however, seems content mostly to imply the domineering nature of Abigail, preferring to feature her career as manager of family finance and real estate. He does so even unto the moment his narrative confronts Abigail’s death on Oct. 28, 1818. In a delightful account of how Abigail had made a will, Holton describes how even at the last she defied the male world in which the laws then held that any wealth a woman might have brought to her marriage became her husband’s to use. Holton points out that while Abigail generally fought “men’s subjugation of women,’’ she was especially angered by “the prohibition against married women owning personal property.’’ Indeed, Holton builds his biography around the thesis that Abigail “lived most of her adult life as a tangible protest against . . . wives’ legal disability.’’ So, instead of describing the funeral of Abigail, Holton uses his final paragraphs to detail how she had listed carefully which item of property should go to which woman in her extended family.

Meanwhile, on Oct. 31 Abigail’s funeral service was a stirring tribute to her even though it was performed by men. Following Abigail’s coffin to the church was a procession led by John Adams, who marched with the governor of the Commonwealth and John T. Kirkland, the president of Harvard College, who delivered the funeral address. The packed audience, however, became distracted as word spread that Abigail’s son, Secretary of State John Quincy Adams, was absent from the public farewell for his mother.

Later, having said nothing about the matter, Secretary Adams instructed Louisa Catherine to inform those who inquired that her husband had been so weighed down by official duties he had no time to travel to Quincy. There was merit in this reasoning, of course. Still, as documents in the Adams Papers clearly reveal, John Quincy had grown increasingly impatient with his mother’s life-long attempts to rule him. She had addressed many subjects with him, from his attire to where and how he should carry out his public duties. Now at last had come the time when the son could demonstrate his independence - after Abigail was beyond scolding him.

Although Holton does not include this bit of Adams family lore, it may be one of the most eloquent accounts of Abigail’s campaign to establish that men and women were meant to be equals, and that marriage was a partnership among equals. It is his treatment of that endeavor that contributes most to making Holton’s biography of Abigail Adams a notable success and very much worth reading.

Paul C. Nagel, a former history professor, is the author of three books on the Adams family, including “The Adams Women: Abigail and Louisa Adams, Their Sisters and Daughters.’’