How a game in ’75 revived baseball 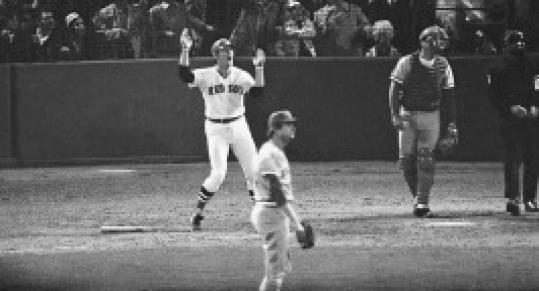 After three bestsellers looking at golf (most notably, “The Greatest Game Ever Played’’), Mark Frost turns his talents to telling the story of what still ranks as one of the greatest baseball games ever played - the sixth game of the 1975 World Series between the Boston Red Sox and the Cincinnati Reds. This was the game that gave us one of the most oft-played clips in sports history: Sox catcher Carlton Fisk leaping and waving fair his game-winning home run in the bottom of the 12th inning.

Frost takes full advantage of the luxury of assembling an entire book about one game, and being permitted to devote more than 400 pages to the task. Each at-bat is developed into a story of its own, offering both contextual history and drama. The book never seems to bog down in details, though. In the process of elaborating the progress of this one ballgame, Frost serves up satisfying pictures of most of the participants - their lives leading up to Game 6, how they fit into the ’75 season, and how baseball and many of the principals’ individual lives unfolded in the years that followed. He claims to have interviewed most of the ballplayers, as well as many of the sportscasters, executives, and other figures in the game at the time. It’s surprising no one’s written this book before, but good that Frost has done so (and done so well) while there was still time to talk with so many.

This was the first postseason night game ever played at Fenway Park. The Red Sox, who were facing elimination, grabbed a quick 3-0 lead in the first inning but the Reds tied it in the fifth, and then built a 6-3 lead. The Sox were down to their final four outs, in the bottom of the eighth with two outs, when Bernie Carbo’s pinch-hit, three-run homer issued a stay and tied the game once more. The Red Sox seemed poised to win in the bottom of the ninth, with the bases loaded and nobody out - but Reds reliever Will McEnaney put out the fire and pushed it into extra innings. Dwight Evans caught what seemed a sure home run by Joe Morgan in the 11th, and the stage was set. Fisk’s dramatic fly ball banged high off the left-field foul pole, and bounded back to the field of play where it was caught on the fly by left-fielder George Foster. But the game was won.

Despite the Sox taking Game 6, and being just 12 outs away from triumph in Game 7 (they held a 3-0 lead as late as the sixth inning), Cincinnati’s Big Red Machine won the World Series. The world championship drought in Boston baseball would endure another 29 years, until 2004.

Since 1967’s unanticipated “Impossible Dream’’ season, baseball had been in a bit of a doldrums on a national basis. Somehow, Game 6 attracted a record-setting viewership as it unfolded, and large numbers of casual fans who might otherwise not have tuned in caught the climax and were swept up in the euphoria - even if they hadn’t considered themselves Red Sox fans. The 1975 World Series, unexpectedly, became what some have called the one that “saved baseball.’’

And the centerpiece of that Series was the dramatic Hollywood-like Game 6 win, capped by ballpark organist John Kiley’s rendition of the “Hallelujah Chorus.’’ The elation and sense of victory was such that even years later Fisk would joke, as he was inducted into the Hall of Fame, “We won that Series three games to four.’’

Bill Nowlin is author of “Red Sox Threads’’ and more than 20 books about baseball and the Sox.