Is this the end?

Some people think book publishing is in its final throes. The Boston Book Festival begs to differ. 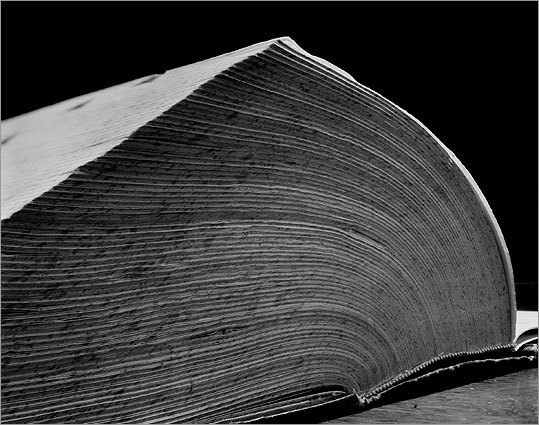 (Abelardo Morell) "Dictionary" is part of a series by local photographer and MassArt teacher Abelardo Morell. The photos are collected in "A Book of Books," Bulfinch Press, 2002.
By Joan Anderman Globe Staff / October 23, 2009

Book sales are down. Readership is on the decline. E-readers are transforming the very notion of a page turner, and Google aims to digitize the written word - all of them.

What a perfectly momentous time to launch the Boston Book Festival. Three years in the making, the ambitious inaugural event arrives in a marketplace mired in recession, with , Target, and locked in a price war and as the publishing industry faces head-on the turmoil and transition familiar to anyone whose livelihood involves that future relic called paper.

“Historically, the conventional wisdom was the publishing industry was recession-proof, and if the adage was ever true it doesn’t remain the case,’’ said Gary Gentel, president of the trade and reference division at Houghton Mifflin Harcourt, a sponsor (along with the Globe) of the Boston Book Festival. “That said, this is the perfect time for a festival. What a great escape.’’

And - considering the crossroads at which the industry finds itself - what a fitting locale. Our town is the birthplace of the first American library, the first American newspaper, and the electronic ink used in Amazon’s Kindle and other e-readers. Emerson, Hawthorne, and Thoreau were born in Massachusetts; today it’s home to cutting-edge institutions whose revolutionary technologies are reshaping the way those authors’ words will be read by future generations.

“Boston is the only major city that doesn’t have a public event to celebrate book culture,’’ said festival founder Deborah Porter, a graduate of the Simmons Center for the Study of Children’s Literature and freelance book reviewer, who set out to plan an event that would honor the city’s past and also its future. Free to the public, it runs Saturday from 10 a.m. to 6 p.m. at various locations in Copley Square. “This festival is meant to celebrate our literary heritage and what Boston still offers the world. There will definitely be a contingent there that thinks innovations are liberating and will change things in a positive way. Yet publishers don’t necessarily feel that way. And I’ve encountered some authors who say ‘count me out’ when I tell them there’s an emphasis on technology.’’

The festival lineup is chockablock with brand-name authors (Pamuk, Perrotta, Russo, Lehane) and scholarly sessions (“Ties That Bind,’’ “The Power of Place’’). There will be history, humor, mystery, music, and a pop-culture spinoff called Writer Idol, which is not recommended for thin-skinned wordsmiths. There’s something for everyone, as the saying goes, and one discussion topic so central to the moment and the mission that it touches participants as diverse as celebrity vegetarian Alicia Silverstone and former poet laureate Robert Pinsky.

“The Future of Reading,’’ led by New York Times personal technology columnist David Pogue, points the way with a provocative subtitle: “Books Without Pages?’’ Bound volumes of printed words are, like camera film and compact discs, headed toward obsolescence and even the most traditional purveyors are changing their game plans. It was announced last week - on the heels of a recent BookScan report showing sales were down 4 percent from a year earlier - that Jane Friedman, the former president and chief executive of HarperCollins Publishers Worldwide, has formed a digital-only publishing house. Massachusetts’ Cushing Academy, a 144-year-old prep school, recently dispensed with its 20,000-volume book collection and transformed the school library into a coffee shop stocked with electronic readers.

Gentel noted that while sales of electronic content have risen sharply in the past 18 months, it’s still a small proportion of overall sales. “We’re moving rapidly into a digital environment. But the shift isn’t going to happen overnight. That said, the moment is now to make sure that everything is digitized.’’

There are plenty of people who cringe at the cultural toll, who believe that the loss of books means losing the tactile, absorbing relationship with text we’ve enjoyed for centuries. MIT technology guru Nicholas Negroponte would like to remind them that people resisted indoor plumbing, too.

“They complained that if women didn’t do the laundry beside the river and at the fountain they would be alone, but other things started to serve those social purposes,’’ said Negroponte, founder of the One Laptop Per Child program, a festival panelist, and Deborah Porter’s significant other. “The reading experience is becoming more social. There are various ways of interacting on e-readers or computers, where people blog and use Twitter, and where the sharp line between the writer and the reader is going away.’’

That’s a mixed blessing for some, including Tom Perrotta, author of “Little Children’’ and “Election’’ and a member of the Boston Book Festival’s advisory board. His last novel, “The Abstinence Teacher,’’ was published in 2007, and Perrotta, 48, expects to change his strategy when his next book comes out in order to connect with a readership that functions more and more fully in cyberspace.

“I always felt like I existed in bookstores, but I think conditions on the ground will be very different in the spring of 2011 when the new one is out,’’ Perrotta said. “There’s a flurry of new online strategies, like trying to tweet an audience into existence. Updike and Roth never felt that publicity was their job. But I know I have to deal with it.’’

Change, Deborah Porter points out, is a constant. And the way stories are told is no exception.

“Book sales are down, absolutely,’’ she said. “But as a species, we are bound to storytelling.’’

Authors to look for at the Boston Book Festival