A vigorous, not entirely persuasive, indictment of US colleges over their early tolerance of the Nazis 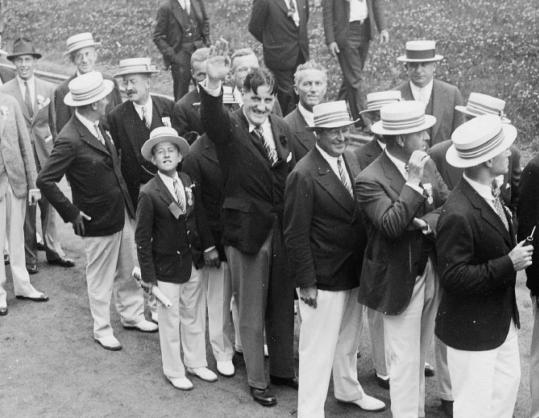 In 1938, after the Kristallnacht pogroms in Germany, where rampaging Nazis assaulted thousands of Jews, ransacked synagogues, and wrecked thousands of businesses, a poll revealed that almost 70 percent of students in colleges and universities in the United States opposed offering their country as a haven for Jewish refugees in Central Europe.

This response, according to Stephen Norwood, a professor of history and Judaic studies at the University of Oklahoma, was symptomatic of the callous indifference among America’s college administrators, students, and faculty to the plight of German Jews throughout the 1930s. In “The Third Reich in the Ivory Tower,’’ Norwood draws on incidents at Harvard, Columbia, the Seven Sisters women’s colleges, state universities, and Catholic institutions to excoriate the nation’s educational elite for its “truly shameful’’ appeasement of Hitler’s Germany and for suppressing protests against fascist atrocities.

When Nazis burned 20,000 Jewish and other “un-German’’ books in 1933, Norwood points out, college and university officials remained silent. Or worse. Although he had led a campaign to rebuild the library at the University of Louvain in Belgium after it was burned during World War I, Nicholas Murray Butler, the president of Columbia University, did not join efforts to establish an American Library of Nazi Banned Books. Butler expelled Robert Burke, a student leader of a mock book burning on campus. And he approved the decision of the chairman of the art history department not to reappoint Jerome Klein, a popular instructor, two months after Klein circulated a petition protesting a visit to Columbia by Hans Luther, Germany’s ambassador to the United States.

In assessing the role of college and university presidents, Norwood sets the bar very high. He believes that they should have known, as early as 1933, the year Hitler took power, that the Nazis would act on their promise to rid Germany of Jews. And he expects them not only to have permitted protests against the policies of the Third Reich, but to have initiated, endorsed, and participated in them. Their sins of commission and omission, he insists, sent a signal to the Nazis that the seizure of Jewish businesses, dismissal of Jews from their professions, and savage beatings “were not their concern.’’

Consider, for example, his indictment of James Bryant Conant, president of Harvard. In May, 1934, Norwood writes, Conant “did nothing to discourage’’ the warm reception Harvard alumni, student leaders, and professors accorded the crew of the Nazi warship Karlsruhe on its visit to Boston. He “welcomed’’ Ernst “Putzi’’ Hanfstaengl, the foreign press chief of the Nazis, to his 25th reunion at Harvard - and “refused to intervene’’ when the Massachusetts Supreme Court sentenced two women who protested the visit by chaining themselves to a railing near the speakers’ platform during commencement to six months at hard labor. He “permitted’’ the Nazi consul general in Boston to place a wreath bearing the swastika emblem in Harvard’s chapel - and sent a delegate to the University of Heidelberg’s 550th anniversary pageant.

Acknowledging that Conant turned down Hanfstaengl’s offer of a $1,000 scholarship to permit a Harvard undergraduate to study in Germany, Norwood notes, however, that the president did not follow the example of Williams College, which terminated exchanges with German universities in 1936. By encouraging study abroad in Germany “without reservation,’’ he adds, in a chapter on the Seven Sisters, administrators helped spread Nazi propaganda and “suggested to the American public that the Third Reich was a legitimate member of the community of nations.’’

As Norwood should know, college and university presidents defended cultural exchanges as a good way to enhance mutual understanding between the people of Germany and the United States. Many of them, moreover, sincerely believed that weighing in on contemporary political conflicts, by denouncing the Nazis or refusing to welcome officials of the German government, was inappropriate - and inimical to the interests of the institutions they led.

Then and now, the dilemmas faced by administrators in higher education are not amenable to easy resolution. “The Third Reich in the Ivory Tower’’ does make a compelling case that presidents dozed, dithered, and ducked during the great and gathering storm of Nazism.

Some of them, who had not hesitated to denounce the “communist,’’ “atheistic’’ Soviet Union, continued to do business as usual with Hitler and his minions, even when the Nazis intensified their persecution of Jews. And Norwood is surely right to suggest that blasting book burning as a grave threat to free inquiry and academic freedom was well within the job description of the leaders of American higher education.

In the 1930s, of course, leaders in higher education didn’t have the luxury of hindsight. With or without it, moreover, some of their rhetoric and behavior, taken in the name of what we’ve come to call “constructive engagement,’’ deserves to be defended. Or, at least judged to be worthy of the plea: “guilty with an explanation.’’