A traveling professor chronicles the church-state divide, with results that prove both comedic and unsettling 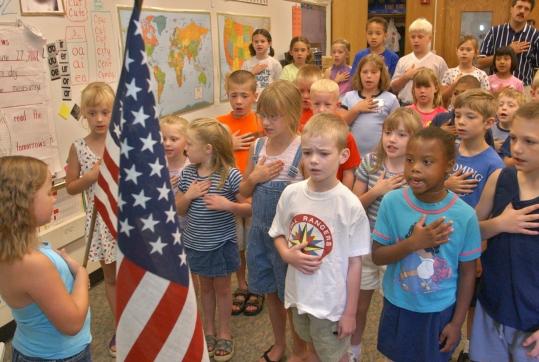 The author believes the inclusion of the phrase “under God’’ makes the Pledge of Allegiance unconstitutional. (Chris Clark/The Grand Rapids Press via Associated Press)
By Joe Rosenbloom July 5, 2009
Text size – +

Jay Wexler, a law professor at Boston University, lectures on church-state issues of sufficient constitutional weight to reach the US Supreme Court. During a sabbatical, he sets out to parlay his lecture notes into a book that even people who would rather drink hemlock than read Supreme Court opinions might enjoy.

If the project sounds problematic, with great yawn-inducing potential, Wexler pulls it off stunningly in “Holy Hullabaloos: A Road Trip to the Battlegrounds of the Church/State Wars.’’ To augment his lecture notes, he embarks on a series of road trips to places “where landmark church/state cases had started.’’

He travels about the country, interviewing people who are linked to a dozen or so of the landmark cases. He calls on worshipers at the CloudWater Zendo Buddhist temple in Cleveland (the city instituted a school-voucher program that the Supreme Court upheld in 2002). He interviews the chaplain of the US Senate (the object of several futile court challenges to the prayer that opens its sessions). And so on.

The tour-guide device might have bombed in a lesser writer’s hands. It works for Wexler because of his gift for filtering arcane legal sludge into clear explanations, his keen eye for detail, and his self-mocking, zanily irreverent sensibility.

Between the comic moments, Wexler critiques how the Supreme Court has defined the separation of church and state under the First Amendment. His is an unabashedly liberal bias: wary of the government’s sponsorship of religion and predisposed to see it as encroaching unacceptably on the free exercise of religion.

Wexler treats religion respectfully, proposing that public schools teach far more about it as a way of “promoting tolerance.’’ Still, much of what he writes is likely to rankle readers who share, say, Justice Antonin Scalia’s conservative philosophy.

Surprisingly, given Wexler’s perspective, he sums up the high court’s record positively, stating that it has “gotten a lot of things right in the area of church/state law.’’ In that assessment he parts company with some of his liberal colleagues who object adamantly, for example, to the court’s rulings allowing the federal government to fund social programs of faith-based organizations.

In a typically candid self-portrayal, Wexler describes himself as a “heathen atheist Jew.’’ But, presumably in the interest of full disclosure, he confesses that he once did come “pretty close to praying’’ upon learning that his “appendix was about to explode.’’

Klutziness accompanies Wexler on the road. While he is sitting cross-legged through a service at the Buddhist temple in Cleveland, which includes 25 minutes of silent meditation, he obsesses on an anatomical development: “Of all the people in the room, I was definitely the one whose hamstrings were making the loudest creaking noises.’’

The trip to Cleveland affords him the opportunity to weigh whether the Supreme Court’s opinion in the school-voucher case adequately protected the rights of nonbelievers and members of minority religions. The Cleveland program, which the court upheld by a 5-to-4 vote, offered $2,200 to inner-city parents who sent their children to private school.

One argument in favor of a “neutral’’ voucher system, such as Cleveland’s, holds that it treats all religions alike, on the theory that any private school can participate. There is a small Muslim elementary school in Cleveland that is eligible to take part in the program, but no Muslim school is available within the city limits for older students. A leader in the Islamic community informs Wexler that many Muslims actually are quite happy to send their older children to the Catholic schools “so that they can be in a religious environment, even if it’s not their own religion.’’

But a Buddhist abbot whom Wexler interviews voices a contrary view. “We can’t even get together for a meeting or a picnic, much less a school,’’ the abbot tells him. Referring to the actual workings of the voucher program, as far as the Buddhists are concerned, Wexler concludes: “Neutral shmeutral.’’

Then there is the question of how far the government can go in displaying or promoting religious symbols and references, such as the words “under God’’ in the Pledge of Allegiance. In a decision on technical grounds, the Supreme Court sent a case challenging the pledge back to the lower courts, where it is pending. Wexler concedes that he is at odds with “nearly everyone in the United States,’’ but it is his position that the phrase “under God’’ is “obviously a government endorsement of religion’’ that is unconstitutional.

Before his visit to Capitol Hill - Wexler sits in the Senate gallery four days in a row - he considers its opening prayer to be merely “mildly irritating.’’ But once he hears the charismatic voice of the Senate chaplain, Barry Black, and learns that the Seventh-day Adventist counsels senators on religious matters that can have profound public-policy implications, Wexler is horrified. “Should the government really be in the business of actively influencing people’s choices, one person at a time, in the quiet office of a powerful Christian officer?’’ he asks.

Not all of Wexler’s stops on the road are so illuminating. He journeys deep into Texas for a high school football game in the town of Santa Fe. A lawsuit challenging the student-led prayer before each home game reached the Supreme Court, which struck down the practice in 2000 as unconstitutional.

On the night of Wexler’s visit, the program listed a moment of silence as part of the opening ceremony, which he’s there to observe. But instead of offering a minute of silence, the public-address announcer “went right into introducing the cheerleading squad,’’ Wexler recounts. Despite a downpour and a lopsided game, Wexler stays to the end, rooting for the underdog Santa Fe Indians. Santa Fe lost 44 to 2.

In hindsight he laments: “They never had a prayer.’’

HOLY HULLABALOOS: A Road Trip to the Battlegrounds of the Church/State Wars
By Jay Wexler
Beacon, 251 pp., paperback, $20