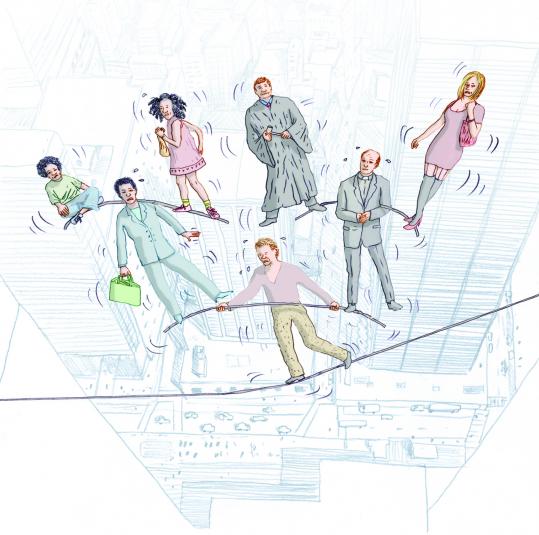 New York City is Antaeus ground for Colum McCann: When he touches down, a surge of strength courses up. When he moves elsewhere (as in his unfocused “Zoli,’’ set in the Balkans) or when he elaborates beyond a spirit of place into complexities of character and plot, he tends to strain.

The sandhogs in his earlier novel “This Side of Brightness,’’ tunneling into Manhattan at century’s turn and seeming to encompass the city from underneath, are his instrument of incantation. So, holding it transfixed from above, is the skywalker in “Let the Great World Spin.’’ He is modeled on Philippe Petit, the Frenchman who in 1974 skittered and danced across a high wire stretched between the tops of the World Trade Center towers.

For McCann, the emblematic New Yorker is homo faber: man (and woman) as laboring artisan, trying to assert a sense of individuality amid the crush of the modern world. In the swirling mesh of stories that attempt to configure his empire city as myth and amid too much exalted writing - with moments of acute pungency - five working lives are this novel’s arrestingly specific achievement.

They belong to a worker priest, a streetwalker, a criminal court judge, and a wire-walker. The fifth is a struggling black mother - because McCann endows motherhood with both the squalor of the streetwalker and the flight of the aerialist.

“Let the Great World Spin’’ is a set of larger and smaller stories that approach, intersect, and diverge. Mainly they coincide with the twin towers walk, though some begin earlier and extend decades afterward.

Corrigan, the priest, lives sacrificially in the South Bronx, where he tends a flock of streetwalkers who service passing truck drivers. The details of his dangerous ministry are vividly set down. Beaten and eventually tolerated by their pimps, he lets the women wash up in his bathroom, brings them coffee, goes with them to court.

His devotion to the downtrodden, though, is marked by a kind of rancid saintliness. As his brother Ciaran observes: “Corrigan wanted other people’s pain. He didn’t want to deal with his own.’’ McCann’s portrait of a tormented priest has echoes of Georges Bernanos and Graham Greene, but there is something too facile, even kitschy in its depiction of the edge on which he teeters.

Tillie, a middle-aged streetwalker, gives an enthrallingly lively account of her life, first as a high-priced young prostitute in posh East Side hotels, and later, as her looks go, among the truck drivers in the South Bronx.

There is an overdecorated account of her “happiest time’’: a week, naked, reading Rumi to a Middle Eastern client who feeds her caviar and champagne and doesn’t touch her. But there is moving and authentic pain as she tells of her daughter, another of Corrigan’s flock, killed along with him in a crash when he was driving her back from court.

Convicted at the same trial, Tillie agonizes over the care of her two orphaned granddaughters. Her argument with the judge - a wonderful mix of sass and tragedy - is a plea to do her time where they can visit her. In jail her voice thins into fatal despair.

Tillie intersects with two other principal characters. One is Gloria, who adopts the two granddaughters. Daughter of a middle-class black family in the South, she goes north to college, sinks through two disastrous marriages into the South Bronx where she struggles to keep a decent home for her three sons, and loses them all in Vietnam.

There is a long, rather contrived sub-story about her friendship with Claire, another bereaved Vietnam War mother; a rich, fragile, and self-centered Park Avenue white woman (her spoiled blankness has a Didion touch), whom Gloria’s strength helps to heal. Gloria’s day-to-day courage and imagination, though, are yet another instance of the city at work.

The wittiest working life is voiced by the judge who tries Tillie. His morose portrayal of the assembly line these first-instance judges deal with is masterly.

The avalanching cases demand that they dispatch nine out of 10 before they come to trial, or the whole system will jam up. His prescribed demeanor: look down at your desk, not at the defendant; your expression should suggest hemorrhoids.

He is also the judge who handles the wire-walker. For the man who, briefly, is the most popular figure in New York, the judge imposes a fine of 1 cent for each foot of the tower’s more than 1,000-foot height.

MCann gives a superb account of the walker’s long practicing, and his careful handling and rigging of the wire. His description of the walk itself would do a ballet critic proud. And if some of his other attempts to elevate work into myth are strained, he succeeds with his image of a flight that lifts the heaviness of a whole city.

Living in an eternal present, New York is short of commemorative statues, the judge reflects. The wire-walker “had made himself into a statue, but a perfect New York one, a temporary one, up in the air, high above the city. A statue that had no regard for the past.’’