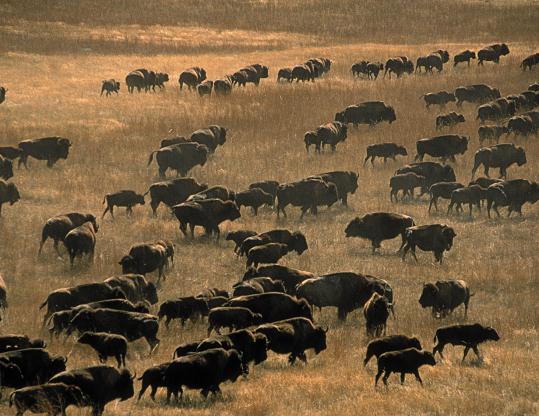 PARADISE FOUND:
Nature in America at the Time of Discovery
By Steve Nicholls
University of Chicago, 536 pp., $30

Here's an image that sticks in my mind. We were inland from the great salmon fishery at Bristol Bay in Alaska, upstream where the spawning run plays out in the streams around the Ugashik lakes. Old fish, tattered from the fight to get there, were fanning their bodies back and forth in the gravel of the creeks where they would lay their eggs. There were so many of them - more fish than river, a kind of meandering fleshy corridor leading into the hills. Abundance on a scale that's almost freakish.

Except, of course, that it's completely natural and normal, or would be if we hadn't managed to impoverish most of the continent. Steve Nicholls, in this fine new book, "Paradise Found: Nature in America at the Time of Discovery," makes an essential point: We should measure the damage to our natural heritage less by counting extinctions, and more by understanding that it is abundance itself that has been drained away. Because there's absolutely nothing special about Alaska except that its remoteness means we haven't completely wrecked it (yet). The Charles River's delta was every bit as fecund. (Ever ask yourself why they call that subway station "Alewife?" Try to imagine a fish run on an Alaskan scale up into the creeks of Arlington.) So was Chesapeake Bay, and the mouth of the Hudson, and everyplace else - the forest that greeted the Pilgrims when they landed in Massachusetts was nearly as stunning as those remnant old-growth forests of the West.

It's hard to imagine, and it's painful to imagine - what did we do? But it's necessary to recall that abundance too, for it should spur us to save what we have left and to restore what we still can. In some cases, it's impossible. Take the sacred cod, for instance. Arriving off Newfoundland and the Grand Banks, John Cabot and his men found so many of the fish that they merely lowered baskets into the water then pulled them up, brimming with the catch. Some fish were five feet long, and weighed in around 200 pounds. And now, in Newfoundland, the government has shut down the fishery for nearly two decades, in the hope that they might someday recover from overfishing. If you can find a cod today, it weighs a twentieth of what it once might have.

Nicholls' book is comprehensive but fleet - he begins with the cod and moves at a good clip through the auk, the whale (so numerous they were a hazard to early shipping), the seal, the bison, the passenger pigeon. It doesn't really matter that the last of the birds died in the Cincinnati Zoo early in the 20th century - they were lost as a phenomenon years before, when their sky-darkening clouds were decimated. It was the cloud, not the individual, that constituted the passenger pigeon, just as an individual bison is no substitute for the earth-shaking thunder of a herd in full flight. Just as a small grove of preserved trees (Nicholls visits the lovely Joyce Kilmer Memorial Forest in the Smokies) half-saddens one, for it reminds you that the endless spreading open forest is long gone.

Some of the stories are more hopeful - Nicholls describes the successful efforts by groups like Ducks Unlimited to preserve the prairie potholes and other nesting grounds of many waterfowl, whose numbers remain strong, or the largely inadvertent recovery of the beaver, whose pelt is no longer valuable. And he makes it clear how important changing public perception has been in the recovery process, from Theodore Roosevelt's first fights against the plume trade that wiped out so many birds to the campaign to make Californians fall in love with the sea otter, whose numbers are now rebounding nicely.

Few of these accounts are new, and most of the individual stories have been told in more detail and with more nuance - for instance, the great Alaskan writer Richard Nelson will forever own literary rights to the whitetail deer after his majestic 1998 book "Heart and Blood." If there's a real weakness to this book, it's the scrawniness of the prescriptions for saving what's left, and reversing more of the damage already done. A few pages at the end offering a scattered and somewhat incoherent take on how "capitalism" is our best hope seem tossed-off, especially since he dispenses with any real analysis of climate change, by all accounts the most fundamental challenge to what remains of our natural world. It will take much more than that - it will require, among other things, the real care that the Alaskans have shown for their salmon fishery. I remember, that same day on the Ugashik lakes, watching a summer employee sitting in a lifeguard chair with a clicker, counting fish as they passed upstream. Not until enough had reached the spawning grounds did he send word downstream that it was OK to let fishermen spread their nets in the bay. It's a good metaphor for the role our governments will need to play - against predictable howls of protest.

Still, this is a book worth owning, especially since our attack on abundance has happened just slowly enough that we've readjusted our sights ("changing baseline" is Nicholls's phrase) with each generation, never really letting the sheer horror of it all sink in. If we had a time machine, he insists, "I'm convinced that every person alive today would be overawed by the true vitality of nature." Books like this are as close as we're going to get.

Author and environmentalist Bill McKibben is scholar in residence at Middlebury College and cofounder of www.350.org.

PARADISE FOUND: Nature in America at the Time of Discovery By Steve Nicholls