Fun with Nick and Ike 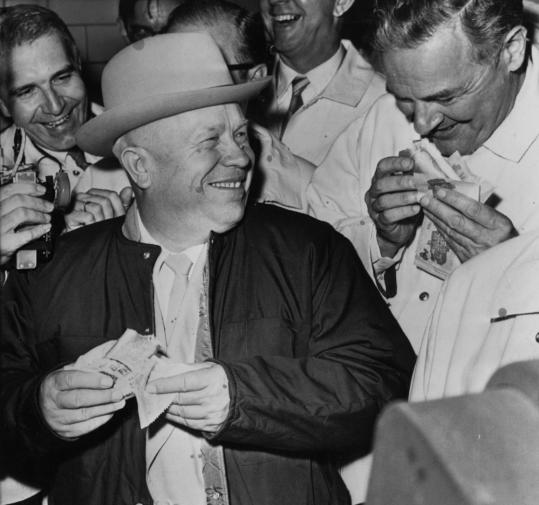 Soviet Premier Nikita Khrushchev samples a hot dog in Iowa while on his 1959 American tour. (From the Book)
By Alex Beam Globe Staff / May 31, 2009
Text size – +

I plan to dedicate the second half of my life to a new cause: books that are fun to read. No more heartwarming dog tales, no more Le Carre lite. Forget mawky "uplifting," creaky "neo-Gothic," unfunny "humorous," "luminous" meanderings by the Yaddo crowd, and grant-funded "fresh new takes on blah, blah, blah." Basta! I am going to review and promote books that promise maximum enjoyment.

"K Blows Top," by former Boston Herald-American and writer Peter Carlson fits the bill. I wish I had written it, in part because it would have been fun to work on. For instance, Carlson conducted some key research with barber-scholar Jerry O'Brien, an expert on Marilyn Monroe and J. Edgar Hoover. O'Brien has a Monroe photo gallery and back brace hanging on the walls of his Yankee Clipper barbershop in Rockville, Md. To be fair, Carlson also spent time in the State Department archives and interviewed many still-living participants in the 1959 hijinks.

"K Blow Top" - the title quotes a classic tabloid headline - tells the story of Soviet leader Nikita Khrushchev's bizarre, two-week US tour that took place 50 years ago. The context has been largely forgotten. The Cold War was very much on. The United States and the now-defunct Soviet Union had huge nuclear arsenals aimed at each other.

The diffident, not very happy warrior Dwight Eisenhower occupied the White House. The bumptious, red-baiting Richard Nixon was his vice president. Nixon visited Russia in early 1959, slurping Pepsi-Cola prior to the famous "kitchen debate" in Moscow's Sokolniki Park, making a return visit from Khrushchev all but inevitable.

Eisenhower grudgingly invited Khrushchev to Camp David to talk about reducing political tension in Berlin. Khrushchev's natural reaction: Why not make a trip of it? Bring the wife and kid, which he did. Meet the capitalists, the farmers, the downtrodden workers, the movie stars! Climb the Empire State Building and see Disneyland! Most of which he ended up doing.

Even before departing Moscow in his TU-114, the world's tallest airliner, Khrushchev was dominating America's news. The FBI estimated that at least 25,000 Americans wanted to kill him. William F. Buckley's National Review magazine was selling stickers that read, "Khrushchev Not Welcome Here." Massachusetts Governor Foster Furcolo sent a letter to his predecessor, Christian Herter, who had become Ike's secretary of state: "I don't know what Mr. Khrushchev's itinerary is, but I strongly recommend that it not include Massachusetts," for security reasons.

In the end, Khrushchev gave the Bay State a pass.

Conversely, thousands of Americans did want "K" to come by. Trumpeter Louis Armstrong invited Khrushchev to visit a jazz club, to experience "the swingin' feel of freedom." Eisenhower wanted Khrushchev to visit his hometown of Abilene, Kan., to "tell him the story of how hard I worked until I was 21." Like Massachusetts, Abilene was ignored.

K hit the hot spots: Washington, D.C., New York, Los Angeles, San Francisco, Roswell Garst's famous corn farm in Iowa, and then Camp David, where he and Eisenhower reached a tentative agreement on Berlin. Everywhere he went, Khrushchev was trailed by at least 100 deadline-hungry reporters and photographers. He rarely disappointed.

The United States in 1959; the paunchy, red-faced Communist Party boss; the gray-suited Establishmentarians who showed off the "typical" America; this is comic gold, and Carlson mines it for all it is worth. For instance, the TU-114 was so unflightworthy that every Russian ship in the Atlantic had been ordered to monitor its course, in the event of a water landing, as we now say. Or this: Khrushchev and his official guide, the Boston Brahmin Henry Cabot Lodge, zipping through Harlem at 7 a.m. in a limousine on their way to the airport. "This isn't bad," K tells Lodge. "We have a lot of areas just like this in the Soviet Union."

The two countries were locked in a propaganda war, taken seriously at the time. Carlson notes that neither side had a monopoly on the truth. At a sit-down with big-time capitalists in Averell Harriman's townhouse, both John McCloy, once called the "chairman of the Establishment," and Frank Pace, chairman of General Dynamics, told Khrushchev "it was absurd to think that American capitalists supported the cold war in order to make money in the arms business."

"His case was not aided by the events of the very next day," Carlson writes, "when Khrushchev delivered a speech calling for disarmament and the stock market lost $1.7 billion." K and Ike were an odd couple, although they had more in common than one might think. Both rose from humble origins, and both had seen World War II up closer than most. (Khrushchev told his American hosts a ghastly anecdote about trying to talk wartime dictator Josef Stalin out of a frontal attack that cost 300,000 Russian lives.) Just 16 months after Khrushchev left America, Eisenhower was warning his countrymen of "the disastrous rise of misplaced power" in the "military-industrial complex."

Ten years after Khrushchev's visit, scholar Daniel Boorstin would coin the term "pseudo-event," an event that "existed for the immediate purpose of being reported." Carlson adopts Boorstin's term, but make no mistake: Pseudo-events are real. People's lives - our lives - were affected. Khrushchev's shoe-banging at the United Nations, the Cuban missile crisis, the downing of the American U-2 spy plane, all of those memorable events lurked in the future.

Happily, Khrushchev never followed through on his threat to "bury" the country where his son Sergei (now a New England resident) slipped away from the media horde to net butterflies in a Maryland meadow, and where his wife, the smiling, dowdy Nina, good-naturedly praised the wonders of American dry cleaning. It all happened during the 1959 visit.

The two countries were never at peace, but they were never at war, either. Indisputably, Khrushchev's visit helped to maintain the imperfect status quo.

Alex Beam, a Globe columnist, can be reached at beam@globe.com. His most recent book is "A Great Idea at the Time."