A former lover renders a riveting, if too reverent, portrait 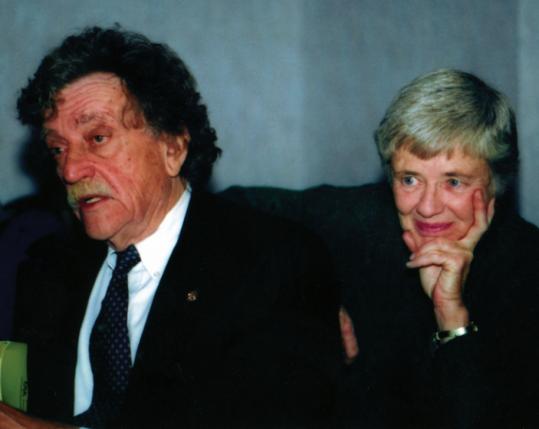 As major 20th-century American novelists go, Kurt Vonnegut did a remarkable job of keeping his private life out of his fiction. While the work of contemporaries such as Saul Bellow and Phillip Roth brims with characters and crisis cribbed, often defiantly, from their biographies, Vonnegut's only autobiographical novel, "Slaughterhouse Five," tells us more about an imaginary species of space aliens than the horrors the author endured during the firebombing of Dresden.

Now comes "Love as Always, Kurt," a memoir written by Loree Rackstraw, Vonnegut's former student and lover. Those hoping for a cri de coeur of sordid personal disclosures will be disappointed. Rackstraw has written an absorbing and occasionally confounding hagiography that happens to begin with an affair.

The year is 1965. Vonnegut appears in Iowa City to teach at the Writer's Workshop. A relative unknown, he arrives with a teenage daughter in tow but no wife. His pupil Rackstraw, a single mother several years his junior, convinces herself that he is estranged from his wife. He does nothing to disabuse her of this, and the two take up together.

"Sometimes he'd pop in at my apartment unannounced, usually in late evening after my kids were in bed, for cookies and milk, or to tell a funny story. I loved our intimacy, our conversations, our laughs," Rackstraw writes. "I was living at an accelerating pace, my energy level boosted by a Dexedrine prescription from a sympathetic doctor, and really didn't have time to wonder about the future."

There's a growing precinct of publishing in which such disclosures would serve merely as the tease: Drug-addled student seduced by famous, married teacher - read on! But Rackstraw, to her credit, refuses to traffic in juicy details.

The problem is that she also glosses over the emotional impact of the brief liaison. Witness her reaction when Vonnegut announces that his wife will be arriving in Iowa the next day: After a sleepless night, Rackstraw visits a psychiatrist "to discuss how tantalized I'd been with the luring enticement of the sparkling Iowa River the night before. A dear Workshop couple came to stay over the weekend with my kids so I could move into their apartment to sleep and get my head straight and body back to normal. It worked, and eventually I figured out how to never let myself ever become that vulnerable again. Or to take Dexedrine."

Is it just me or does this resolution feel a tad pat?

At moments like these, Rackstraw comes off as an unreliable narrator, a woman too invested in Vonnegut's brilliance to see his flaws, let alone investigate them. There is, after all, a glaring and familiar discrepancy between the humanism Vonnegut preached in his books and the caddish behavior he visited upon her.

I sensed a richer and more disturbing story to be explored here, about the rewards and perils of hero worship, particularly as it relates to male narcissism and female apostles.

But Rackstraw is an advocate, not a proper biographer. She quickly shifts from old flame to epistolary confidante. In this capacity, she does a fine job of suggesting Vonnegut's intellectual vitality, the breadth of his moral concerns, and the insecurities that plagued him.

"One thing that troubles me is that anything I write now sells like crazy and my publishers won't tell me honestly what they think of my work, since their opinion doesn't mean a damn thing commercially," Vonnegut writes in 1976.

Rackstraw faithfully defends Vonnegut's oeuvre - she goes so far as to compare his 1986 novel "Bluebeard" to Nietzsche's "The Birth of Tragedy" - but this assertion remains haunting precisely because most critics dismissed his later novels as minor. Then again, we can safely assume most critics never slept with Vonnegut.

"Love as Always" is perhaps most fascinating for what it suggests about the tumult of the artist's life. Vonnegut, in fact, comes off as well-adjusted compared with his friend Richard Yates, a brilliant novelist who seems forever on the brink of nervous collapse.

What seems to have rescued Vonnegut from deep depression is his manic need to create - not just books, but speeches and plays and drawings. His letters to Rackstraw are marked by the same deadpan brilliance he brought to his published prose. "I'm fine at fifty," he writes, "New York jazzes me up. It's my monkey gland transplant. People speak to me on the street. I glow. I feel like a useful citizen. I like famous people."

This last observation is particularly strange, given the contempt his work expresses for the wealthy and powerful. But it embodies Vonnegut's essential ambivalence. Like his hero Mark Twain, he was both desperate for the spotlight and horrified by his need for it. And, like Twain, Vonnegut was eventually worn down by personal tragedies he saw reflected in the world at large.

Rackstraw remains loyal to the end, tracking his triumphs and disappointments with a tone of tender worship. Vonnegut had this effect on his readers. More so than any writer in recent memory, he made himself the central figure in his work. To root for him was to root for the wisest and most compassionate part of ourselves.

Steve Almond's most recent book, "(Not that You Asked)," contains a lengthy appreciation of Kurt Vonnegut.

LOVE AS ALWAYS, KURT: Vonnegut as I Knew Him By Loree Rackstraw