Elmore Leonard's first novel, "The Bounty Hunters," was published in 1953. Fifty-six years later, America's premier literary entertainer is still in business - and business is good. You know from the first sentence that you're in the hands of the original Daddy Cool: "They put Foley and the Cuban together in the backseat of the van and took them from the Palm Beach County Jail . . . to Glades Correctional, the old redbrick prison at the south end of Lake Okeechobee."

The main characters in "Road Dogs" are drawn from at least three previous novels, but there's no need to refresh yourself on the Byzantine plots of "Riding the Rap," "La Brava," and "Out of Sight" (which became a successful movie starring George Clooney) to enjoy this one. It's enough to know that Jack Foley's a legendary bank robber with a heart of, if not gold, then some not completely base metal; Cundo Rey is the foxy, hot-blooded Latin who wants to play Jack; and Dawn Navarro is Cundo's sorta wife, steppin' dynamite and several light years from the saint Cundo would like her to be. "You can call me Reverend Dawn, if you like," this untrustworthy honey tells Jack. "I'm an ordained minister of the Spiritualist Assembly of Waco, Texas, though I started out doing nails." It's the perfect Leonard character capsule: succinct and out of the lady's own mouth (although if you start out thinking of Dawn as no more than fuzzy-sexy-dumb, Leonard is going to change your mind - she's a black widow).

Or how about this summation of Rey, as delivered by his old buddy, Jack: "Cundo isn't dumb. He can't add figures, but he knows what the balance is." Aspiring novelists who want to understand that hoary old writing seminar dictum, "Show, don't tell," would do well to save their tuition and read Leonard instead. It's cheaper and a lot more fun.

Speaking of fun, getting there is most of it in a Leonard novel, which means not spoiling the plot (and hey, the strands are never easy to untangle, anyway). I'll tell you a little, because it's too good not to share, but it's probably enough to say that the usual gang of bangers, hustlers, and nut cakes are here, from the FBI agent (Lou Adams) who's obsessed with putting Foley back in jail, to Rey's sexually ambiguous business manager, James "Little Jimmy" Rios, who sees himself the second coming of Tony Montana, the "Scarface" antihero famous for saying, "Lemme innerduce choo to my l'il frien." This is a full and glorious Leonard parade - call it The Seven Deadly Sins Marching Band. Some of these guys will achieve a modicum of decency, but more by accident than design. In Elmore World, long-range planning is always in short supply.

Jack and Cundo Rey (I love that name) meet while doing hard time; a projected 30 years, in Jack's case. They become road dogs - prison slang for guys without gang affiliations who buddy up to stay safe in the yard - and Cundo pulls expensive strings to get Jack released early. He has plans for Jack once they're both back in the world. Because, dig it, the Cundos of the world don't do anything out of the goodness of their hearts. Or for free.

Soon Jack's in California and snuggling with Cundo's sorta wife. Dawn's a psychic (in one of the book's most engaging cons, she turns Jack into a professional ghost hunter-cum-exorcist to the rich and famous), but somehow fails to see that Cundo, also freed from the petty constraints of Glades Correctional, is going to show up a day early, and - in the words of that great philosopher George Jones - burn her playhouse down.

Sooner or later somebody's gonna die, because this isn't "Marley and Me." In the more than 40 Leonard novels that have followed "The Bounty Hunters," there has always been steel behind the smile. The marchers in this fools' parade may be funny - sometimes uproariously so - but they're still outlaws, dancing on the edge of doom thanks to their own greed and poor impulse control. Leonard knows exactly what he's up to, and has since the beginning of his storied career. If you think of him as the cutie-pie of crime fiction (many critics seem to), you'll get sandbagged.

The fun in the best of his novels - and this is the best in years - stems from the fact that Leonard starts turning the screws on page one and never stops. The dialogue crackles; the supporting characters are crisply drawn; and the story achieves almost instant escape velocity.

If you like your crime fiction laced with deadpan wit (Leonard doesn't exactly do humor), then this one'll kill you. Even the worst marchers in Leonard's fools' parade have a certain scabrous charm, and that makes them worth watching. And, appalling or not, rooting for. This is one walk down Crooked Avenue you'll be more than happy to take.

Stephen King's new novel, "Under the Dome," will be published by Scribners in November. 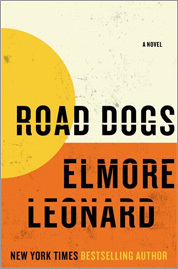