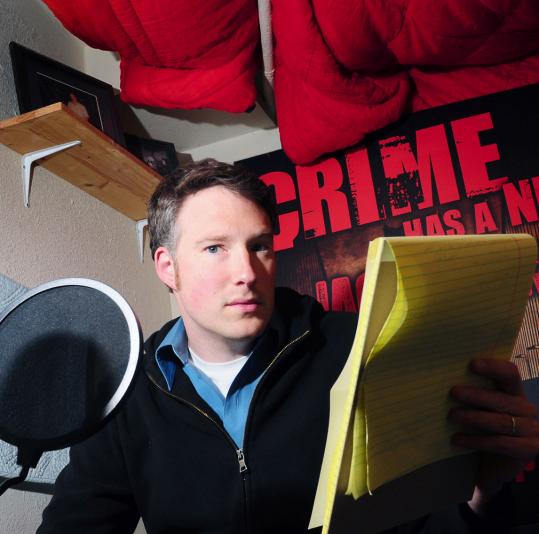 Seth Harwood's podcasts of his crime tale, ''Jack Wakes Up,'' and other stories have been downloaded 40,000 times. ''It felt like for the first time I had found this actual audience,'' he says. (Jan Sturmann for The Boston Globe)
By Joanna Weiss Globe Staff / May 9, 2009
Text size – +

Once, Seth Harwood intended to get his novel published the old-fashioned way: Get the pedigree, write the manuscript, nab the agent, win the big contract.

But when the Newton North graduate couldn't attract an agent for his crime thriller, he decided to do something radical: Get an audience first - by reading his book aloud, episode by episode, online.

In short, he entered the nascent world of book podcasting, and it worked. So far, 40,000 listeners have downloaded Harwood's weekly podcasts of "Jack Wakes Up," his debut crime novel - and a year ago 500 of them "stormed ," as Harwood puts it, to buy copies of the book online when it was released by a small New Hampshire press.

That was enough to make the book the top-selling crime novel of the day and get the attention of an agent and a publisher, at last. This week the book was rereleased - with a bona fide marketing campaign - by Three Rivers Press, a paperback imprint of Random House.

Philip Patrick, the publisher of Three Rivers Press, said publishers and agents are increasingly scouting for talent among podcasters and other self-publishers. "We're all paying attention to what is going on out in the world around us," Patrick said. "Sometimes it takes somebody to shine a light into a dark corner of the Internet that we haven't seen yet."

Harwood's road to publication was a long one - temporally and psychologically - for a writer who had started out by following the literary-fiction path. A decade ago, he was honing his craft by taking writing courses at Harvard Extension School and gaining admission to the prestigious Iowa Writers' Workshop, where he focused on writing short stories. He graduated in 2002 and, with no agent or contract to publish his collection, returned to the Boston area to write and teach.

In 2005, still no contract in hand, Harwood moved to the San Francisco Bay area, where his wife was pursuing a graduate degree. Out there, he had an epiphany: He wanted to write a crime novel. He had an idea for a book about a onetime movie star named Jack Palms, down on his luck and broke, who gets caught in a web of crime. Harwood found he wrote more happily - and quickly - when he could fit in references to "Scarface" and "The Sopranos."

It took him about three months, in the fall of 2006, to finish a first draft of "Jack Wakes Up," and two agents were encouraging at first. But both eventually declined to take the book on, and Harwood was discouraged and disheartened.

Then he started thinking about the short stories he'd written over the years. Some had been published in respected literary journals and, it seemed, barely read: "I would get my two copies and give one to my mom and that was sort of the end of it." But one had been published in a less-prestigious online journal, and had attracted readers and comments. Harwood wondered if he should abandon his prejudices - "It was like this thing that sat on the shelf was more legitimate than something that people could actually read" - and think about putting his novel online.

But how to post a novel on the Internet? Harwood wasn't a fan of reading large blocks of text online, but he had listened to his share of books on tape. And a friend of his told him that he had been listening to books online, on a website called Podiobooks.com.

The site, which offers downloads of books for free, was launched in 2005 by Evo Terra, a digital business strategist who interviewed sci-fi and fantasy authors on a radio show. He set up a way to send subscribers episodes via customized RSS feeds. And he started to load his site with mostly sci-fi and fantasy writers - whose ranks are large, and whose fans tend to be attuned to the latest technology.

One of the more successful ones was Scott Sigler, a science fiction/horror writer who lived nearby in San Francisco. Harwood contacted Sigler, who taught the neophyte the podcasting ropes. The audio, Sigler taught him, doesn't have to be fancy; so long as listeners can tell your voices apart, they'll forgive a lot. The key, he said, is to give them something new every week so that they have an incentive to come back.

So Harwood started reading "Jack Wakes Up" online, posting MP3s on his own website and on Podiobooks.com. First, he got an e-mail from a friend. Then e-mails started pouring in from across the country, and from Australia, Canada, and the United Kingdom.

"It felt like for the first time I had found this actual audience," he said. "I'm giving the book away for free, but how can that be a bad thing if I'm building an audience?"

When "Jack Wakes Up" was finished, Harwood started to read from his unpublished collection of short stories, then he wrote and podcasted more books in the series - there are now three completed Jack Palms books in all, and Harwood just finished podcasting a prequel, "Young Junius," set in 1980s Cambridge and Somerville.

Harwood's goal was to follow Sigler's path to publication: Sigler's book "Ancester," published by a small Canadian press on April 1, 2007, shot to the number-two fiction book on Amazon.com that day. Within two months, Sigler had a contract with Crown, another Random House imprint.

Harwood found a publisher in New Hampshire-based Breakneck Books - a company owned by a fellow podcaster, fantasy writer Jeremy Robinson. When "Jack Wakes Up" book came out on Sunday of 2008, it shot to No. 1 on the Amazon crime fiction list and No. 45 overall. The next morning Harwood heard from Sigler's agent, and before long he had his contract with Three Rivers Press.