Can a mother get a break?

Essays wonder why women are so hard on each other 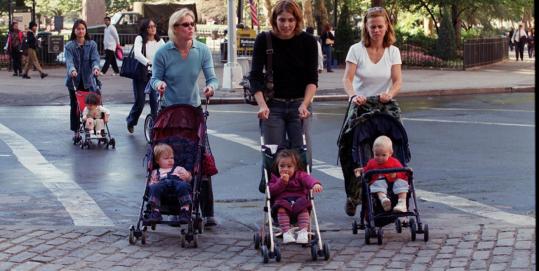 New York women get the children out for fresh air, but are the ''Bad Mother Police'' watching? (New York Times)
By Rebecca Steinitz May 3, 2009
Text size – +

Novelist Ayelet Waldman has degrees from Wesleyan University and Harvard Law School; a career that would-be writers would kill for; four "smart and thoughtful, funny and wise," "creative and very intelligent" children; and a handsome, brilliant, high-earning husband (Pulitzer Prize-winning author Michael Chabon), who cooks, changes diapers, fixes leaky faucets, and is great in bed. You'd think she would be living happily ever after.

But no, Waldman has a problem, and she wants you to know about it. Her life, and the lives of myriad women like her, are being made miserable by the "Bad Mother police." You haven't encountered this powerful force? Then you must not be a mother in Berkeley or Brooklyn. Perhaps you don't frequent websites like www.UrbanBaby.com, home of the "warrior shrews" of "New York City's elite Bad Mother SWAT team." Maybe you've never heard of the "particular brand of sanctimony . . . generally associated with attachment parenting." If so, you have no idea. It's hard out there for a mom!

Over the past decade, in her Mommy-Track mystery series, two novels about mothers, the brief but infamous Bad Mother blog, and an even more infamous New York Times Modern Love essay, Waldman has reported on the foibles and fixations of modern motherhood. Now she adds to her oeuvre a collection of essays, "Bad Mother: A Chronicle of Maternal Crimes, Minor Calamities, and Occasional Moments of Grace."

"Bad Mother" is preoccupied with two specters: the Good Mother, whose "single defining characteristic . . . is self-abnegation" (and who is - surprise! - a "creature of fantasy"), and the Bad Mother, who appears to be the rest of us. Waldman's research sample, "the mothers I know," is a sad lot, bedeviled by ideals they cannot achieve, disappointed, anxious, unfulfilled, and, worst of all, selfish. The Bad Mother police? They are us, too. To comfort ourselves for our failings, Waldman argues, we turn on our peers, wagging our fingers at the likes of neglectful mother Britney Spears, murderous mother Andrea Yates, and the woman down the street who feeds her kids Cheetos. We must convince ourselves that someone else is worse than we are, so we can't be as bad as we fear.

Waldman has a point. Women are notoriously hard on each other, and today's child-focused, economically challenged culture has heightened our anxieties about ourselves and our offspring, making many of us over-sensitive and over-aggressive - especially on the Internet, where the Bad Mother police hang out.

Waldman also speaks from experience. After writing in her Modern Love essay that she loved her husband more than her children, she became the target of a tsunami of maternal vituperation, culminating in an Oprah appearance during which, as she reminds us several times, a woman jumped on stage and screamed: "Let me at 'er!" Horrifying, perhaps, but then again, despite Waldman's explanation to Oprah that she meant she loved her husband differently than she loved her children, the offending line reads, "I love my husband more than I love my children." This does not make her a bad mother, but it certainly makes her a canny provocateur.

Here we come to the heart of what is frustrating about "Bad Mother." Despite a few banal essays, like the one where she not-so-originally points out that first and last children are parented differently, Waldman is often an astute commentator on contemporary parenting. In "Sexy Witches and Cereal Boxes," she is nuanced and thoughtful about the perils of teenage sexuality and the importance of parental honesty. In "So Ready to Be the Mother of a Loser," she comes to terms with the fact that her children are different from her, and she needs to parent them as they are, not as the versions of herself she thought they would be. In the book's most beautiful and powerful essay, "Rocketship," she tells the story of aborting her third pregnancy after amniocentesis revealed a genetic defect, an event that caused her to rethink abortion, face her guilt, and, ultimately, heal. In each of these essays, and in others, women and mothers - friends, relatives, strangers - are supportive, thoughtful, funny, honest, even loving. But nuance and mutually supportive mothers don't get you on Oprah, and conjuring up the Bad Mother police is a more effective way to sell books than foregrounding the complexities of real life.

In the end, the Bad Mother phenomenon Waldman frames as cultural seems as personal as anything else. Waldman poignantly details her struggles with bipolar disorder, and her fear that she will bring harm to her children through her mood swings, her genetic legacy, or both. It is clear, however, that she is a perfectly fine mother, veering from great to flawed, like most of us.

In the book's final lines, Waldman articulates her vision of the mother she would like to be: "A mother who doesn't worry so much about being bad or good, but just recognizes that she's both, and neither." Such self-acceptance seems an excellent goal for all of us, vastly superior to taking potshots at specters; I just wish it hadn't taken Waldman so long to get there.

Rebecca Steinitz is a writer, editor, and consultant who lives in Arlington.