From the perch of a Vermont village, a scientist spots the quickening pace of climate change 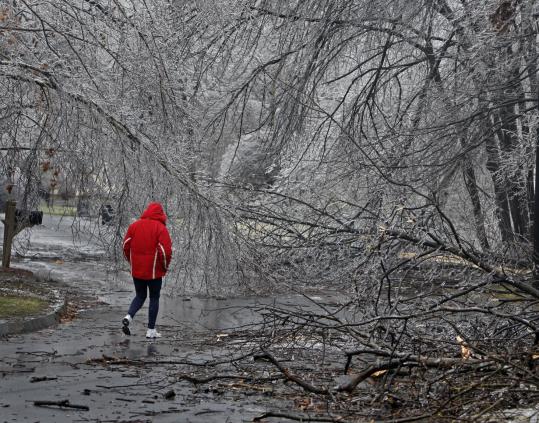 EARLY SPRING: An Ecologist and Her
Children Wake to a Warming World
By Amy Seidl
Beacon, 172 pp., $24.95

"Early Spring" is the kind of book we'll be seeing more of, as the natural world tilts, sags, slumps, and burns, growing ever-more heated, and with biology's whispered promises of impermanence dialed up to a such a volume now that even those who might not wish to consider such things can hear them roaring in the near distance.

In this book, scientist Amy Seidl doesn't come across as being overly sentimental or sorrow-filled as she considers various arcs and endgames, and there are fewer passages detailing the time spent with her very young children than I had anticipated, given the title. She and the children make a few walks here and there, but much of the book is a watching and a wondering on Seidl's part - will they still tap maples for sugar early in the spring? What species will still inhabit their lives, and which ones will be gone?

It's a scary time to be a parent, but - if one can guard one's heart - it's not an uninteresting time in the least to be a scientist.

Several passages struck me as having the emotional quality that might attend to a man or woman standing on a porch in tornado country, watching the darkening sky fill with tiny bits of dust and grit and other flotsam. One hopes the storm is not coming but it is, and, standing on the porch feeling those advance warm gusts, there's certainly no way to look away.

Aldo Leopold said that to possess an ecological consciousness is to be aware that we live in a world of wounds, but perhaps it is this same consciousness on Seidl's part that prevents her text from dwelling in nonproductive sentimentality or sorrow, for even as the emotive part of her brain registers steady losses, the intellect seems to almost suggest a fascination to be gotten in watching the accelerated movements of all living things, human and nonhuman, affected by global warming.

Set in Vermont, there's a fair bit of New England's rapid ecological change discussed in the book, but there is also acknowledgment and discussion of much more going on beyond the hollow where Seidl lives, science-based examples of the heated breath that is announcing these disruptions, and the foretelling of the havoc they will wreak.

In Vermont, a freak storm rips the limbs from the maple trees, daffodils emerge early, winter grass remains green deep through autumn and into winter, and bobolinks decline: What will be the outcome of this unraveling of what has been the traditional fabric of a place such as a Vermont hollow?

Again and again, lamentation or even fear and disappointment is often replaced by scientific curiosity at the howling changes, the threshold of which we have just crossed, and the long view of which we are just now glimpsing. In some passages, the academic awe seems not only to dilute the lament, but to buffer or supplant it.

Seidl discusses one of the many changes we can expect, but haven't thought all the way through yet, when she writes about the differences between weedy plants and plants used by people for food, such as corn.

The two forms of plants - C3 or C4 - reflect a divergence from 500 million years ago, "when there was as much as twenty times more carbon dioxide in the atmosphere." A lot of our food crops are C-4s, while a lot of our weeds are C-3s. The weeds will likely benefit from global warming, the food plants not so much. How will we, as well as the rest of the natural systems in which we are a struggling part, adapt? The scientist part of Seidl can't help but look forward, even while wondering what we'll be able to take with us.

That's one of my underlying personal fears about all this self-wrought disruption: How long and how hard will some of us fight the changes, and how soon will others learn - too quickly, I fear - to accept and accommodate such changes, acting as irresponsible proxy for future generations?

"For the average person," Seidl writes, "it is hard not to notice how changed the seasons have become. Our outlook on what those changes will bring has altered, too. We are skeptical of the seasonal rituals we've kept: how much longer will we be able to depend on them? And some begin to weigh this skepticism against their own self-interest: will the region I live in benefit from climate change? Then there's the psychological schism that occurs when warm weather comes on unexpectedly. Do we delight in an early spring day or an Indian summer that carries us well into November? Rather than rejoicing, I feel chagrined when the garden responds to the warm weather by sending up new shoots . . . We are learning to abide unseasonable weather with a pronounced measure of woe."

This, I think, is going to be one of the many tangles humanity will face as we swim into the future amid so many extinctions and eradications: of individual species, of entire ecosystems. Do we downgrade our sorrow to chronic woe? Do we hope blindly? Do we act with futility or resolve?

Certainly, we can exert leadership at the local level - education is critical - but the changes are coming so fast that a concert of voices from all around the world is critical, and Seidl's, as carbon-warrior Bill McKibben writes, "is a new kind of contribution to the rapidly growing library on global warming."

Rick Bass is the author of 24 books of fiction and nonfiction. In July, Houghton Mifflin Harcourt will publish a memoir, "The Wild Marsh."

EARLY SPRING: An Ecologist and Her Children Wake to a Warming World