A former priest finds peace to the left of the flock

Fans of James Carroll's Globe column, and I'm one, know that he's a former Roman Catholic priest who deploys formidable knowledge of Christian history and teaching in his writing. Reading Carroll on religion is always an education. He's also an author - "Constantine's Sword" is his most acclaimed work - and his newest book is a hybrid of memoir and ideas.

"Practicing Catholic" could just as easily have been titled "Conscience of a (Theological) Liberal." It distills its religious outlook from its author's personal history: his Catholic youth, ordination, his excitement over Vatican II's reforms and disillusion with the church's backpedaling therefrom, and finally his decision to trade the priest's collar for the writer's pen.

As a Catholic of Carroll's persuasion, I find the intellectual ammo he brings to bear potent. Traditionalists will have a big problem with him, though thoughtful ones will recognize the need to confront his arguments, since on many matters the majority of American Catholics stand with Carroll, not the Vatican. He wittily disposes of the argument against women's ordination, which is premised on the fact that the Twelve Apostles were all men: "No Celts were among Jesus's Apostles, but the Irish can be ordained."

His dissection of Humanae Vitae, the 1968 encyclical upholding the church's ban on artificial contraceptives (against the advice of a papal advisory commission), is a little longer. On the one hand, Pope Paul VI wrote that "each and every marital act must of necessity retain its intrinsic relationship to the procreation of human life," as that is God's will and the way by which true love is expressed in marriage. But then the pope said just the opposite: It's OK to sever sex's "intrinsic relationship" to procreation in the instance of natural family planning.

How could a church with two millennia of sophisticated moral reasoning embrace such a contradiction? Many Catholics have wondered why, if natural pregnancy prevention is fine, the use of artificial means makes any moral difference. Carroll offers a persuasive explanation: The Vatican's concern "was not birth control but papal authority." Admit that the church had been wrong on this issue, the pope and his supporters reasoned, and all sorts of challenges to the magisterium would flood in. (A priest on the advisory panel, whom Carroll doesn't quote, gave away the game when he asked fellow commissioners: If the church were to throw out its contraceptive ban, "what, then, of the millions we have sent to hell?")

Carroll's supple mind and ideas are more interesting than his biography, however much the latter informs the former, though fans of memoirs and Catholics of his generation may appreciate his memories and observations of Catholic life. He is less sure-footed when he strays from religion. Those who don't share his pacifism will find it utopian, not "humanity's only realistic hope." He approvingly cites the late Pope John Paul II's opposition not just to the Iraq War but to the first Gulf War and the conflict in Afghanistan. One could make a reasonable case that history has judged the first two legitimate, even granting our tactical bungling in Afghanistan.

He doesn't reject all of the tradition (he generally agrees with the church's antiabortion stance and treasures its peace advocacy), and he pointedly notes that many Mass-goers who share his views on contraception would be judged "bad" Catholics by traditionalists. In the end, this is as much a love story as a bracing theological confession. 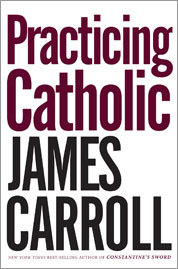