These final poems mark last birthdays, bouts with cancer, and the incredible lightness of being 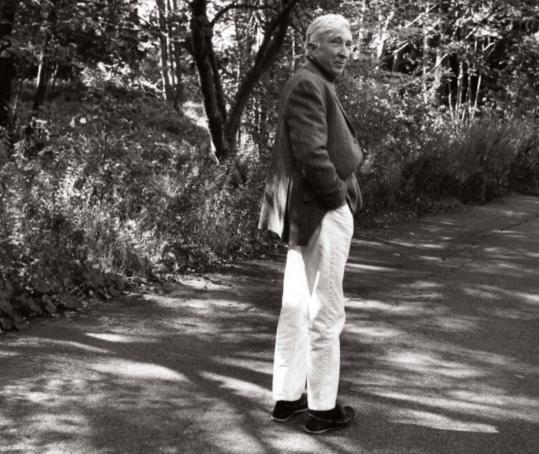 John Updike, who died in January, is known mostly for his fiction, but his first published work was poetry, in 1958. (Jill Krementz)
By Peter Campion April 12, 2009
Text size – +

John Updike will always be best known for his novels and short stories. But the author, who died in January at 76, was a poet too. In fact, he crossed genres often and fluently: He was also a literary critic, an art writer, and a memoirist. Unlike many of his contemporaries, Updike didn't hold an academic post. He earned his living by his pen, and he thrived off the kind of speedy challenges more typical of a beat reporter than a Pulitzer-Prize-winning man of letters. In a poem from "Endpoint," his posthumously published collection, he recalls a time early in his publishing career when "a poem might buy a pair of shoes."

That line may hint at a lack of seriousness in Updike's verse, a sense of poetry as an odd job or sideline. But the poems in "Endpoint" suggest otherwise. Updike's very first book, "The Carpentered Hen" (1958), was a volume of verse, and it was to that genre he returned in his last days. The heart of "Endpoint" turns out to be its opening section, which forms a sequence, beginning with poems written on the author's recent birthdays, continuing through his bouts with cancer, and ending a month before his death on the North Shore.

The poems, often written in a jauntily varied iambic pentameter, read like lineated journal entries, but a feeling of necessity runs beneath each of them. At the end of "March Birthday 2002, and After," Updike asks, "Birthday, death day - what day is not both?" That intertwining of wonder and mortality stretches throughout the sequence. Updike's tone never resembles Dylan Thomas's "rage against the dying of the light." But he doesn't offer easy valediction either: He doesn't want to die. That querulousness balances in the poems against the composure of the loving husband, the father and grandfather, the gentleman.

This blend of urgency and poise shows in the language itself. Line after line, Updike seems driven to get the world, and the word, right. The poems are dignified everywhere by his lucidity of vision and his inventiveness of phrasing. In one poem, Boston's Mass General Hospital becomes, in a single line, "Benign big blond machine beyond all price." In another poem, midtown Manhattan appears from a plane "bristling up like some coarse porcupine." Often the phrases show Updike's high-focus, oddball humor. Remembering William Shawn, the famous editor of the New Yorker, Updike describes him as "the magus in his cave." And he begins one of the hospital poems with this hosanna: "All praise be Valium in Jesus' name."

Updike's penchant for basing his poems on the day-to-day might open him to the charge of lightness. Certainly, several of the poems placed later in the book are light in the traditional sense. In fact, the last section of the book is titled, "Light and Personal," and it includes zippy lyrics about life on Mars, as well as a ditty addressed to Monica Lewinsky.

Yet the poems have genuine gravitas, and not just because so many of them deal with the threat of mortality. Another intensity comes from the very occasional aspect itself. By remaining close to the tone of journal entries, the poems show the reader the mind behind the fiction.

This was always the case with Updike. Looking back over his decades of work, you sometimes see a direct line following from the poems to the fiction. In one of his most anthologized poems, for example, "Ex-Basketball Player," written in the mid-1950s, he provides the first sketch for his famous character, Rabbit Angstrom.

Elsewhere, the poems reveal the writer's effort itself. In fiction, at least traditionally, the author hides behind a screen from his creations, like the Wizard of Oz. But in his poems Updike shows not only the life of the writer with its days of "novel proofs Fed-Exed," but also the very motives behind his writing.

The deepest of these for Updike was the urge to render the pulse and sinew, the mystery and vulnerability of human presence. In short, he cared for people. His irony and his trenchant wit might prevent his work from ever turning sentimental. Still, the compassion ripples through. In "Endpoint," Updike names the poem "Peggy Lutz, Fred Muth," after two deceased friends, with whom he attended elementary school in his hometown of Shillington, Pa., The poem opens: "They've been in my fiction." The author goes on to declare, "Dear friends of childhood, classmates, thank you."

Perhaps no passage portrays Updike's regard for others, and his urge to give them reality in his fiction, better than these lines from "Spirit of '76," in which Updike addresses his medium of language itself:

"Be with me, words, a little longer; you/ have given me my quitclaim in the sun,/ sealed shut my adolescent wounds, made light/ of grownup troubles, turned to my advantage/ what in most lives would be pure deficit,/ and formed, of those I loved, more solid ghosts."

Peter Campion's second collection of poems, "The Lions," has just been released. He teaches at Auburn University.

ENDPOINT AND OTHER POEMS