A haunting look at American lives

America simmers in the writings of Joyce Carol Oates, going through the motions of everyday life as best it can, but prone to boiling over at any moment.

In these disturbing stories, normalcy in one form or another - a husband and wife driving on a highway with their infant child; a woman caring for her elderly father; a son returning home from college; a woman on jury duty - dissipates quickly and shockingly into the dark and surreal, the violent and the tragic, as so frequently occurs in our culture.

The setting is often upscale, the picture of seeming success, which renders the aberrance all the more horrific. In one story, for instance, a famous New York writer tries to seduce her teenage son while visiting him at his prep school. In another, an old wealth Ivy League college student is asked by her nouveau riche boyfriend to visit his family for a weekend, where a fight breaks out among his brothers.

Elsewhere, the context differs. A typical upstate New York town is the venue for a drug addict's obsession with a woman. A devout Christian drowns her five children in her bathtub before attempting suicide. A Minnesota woman contacts her grandparents' former housekeeper in Princeton, N.J., to learn about her grandfather's 1969 death and a 1965 argument involving her grandparents and parents she only vaguely recalls. She is told her grandfather, a famous Princeton logician, was an alcoholic and into pornography.

Two stories mirror recent events, a proximity of fact and fiction that has sparked criticism of Oates for seeming to exploit real tragedies in her writing. It has also renewed the perennial debate among critics over fiction serving a journalistic purpose, telling a factual story perhaps more eloquently than journalism itself. Oates teaches at Princeton.

First published in The New Yorker in 2006, "Landfill" tells of a Michigan college student who gets drunk at a fraternity party, ends up in a dumpster, and is found dead in a landfill, much like what happened that year to John Fiocco Jr., a New Jersey college student. "Dear Husband," is a letter written by a distraught woman resembling Andrea Yates, the Texas woman who drowned her five children and attempted suicide in 2001.

As in much of the fiction that Oates has written over her celebrated career, blood abounds in these stories, a motif of American violence as visceral and ubiquitous as the blood in our veins. "I will sign this in blood. In this way Joyce Carol, you know my heart," writes Esdra Abraham Meech, a murderer soon to be released from an Idaho jail, in one of several letters to a writer named Joyce Carol in the story "Dear Joyce Carol,"

His reverent letters turn vicious when he comes to believe she wrote about him in a story, a twist on the intersection of fact and fiction in Oates, who in this collection has once again held a haunting mirror up to America, revealing who we are. 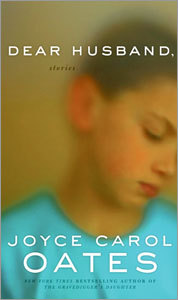