As a foreign policy expert and Pulitzer Prize-winning former columnist for The New York Times, Leslie H. Gelb knows a lot about American power. He certainly doesn't like how it's been used recently. He blames the administration of President George W. Bush for having an excessively narrow definition of power, as in military force alone.

He also blames liberals for too much reliance on the concept of "soft power" and a consistent refusal to wield military force: "Leaders of other nations . . . are not going to do something they don't want to do because they've come to admire our values or because American leaders have succeeded in making previously unconsidered intellectual arguments of overwhelming and dazzling elegance."

Gelb takes a broader, multidimensional view of power: "Power is getting people or groups to do something they don't want to do. It is about manipulating one's own resources and position to pressure and coerce psychologically and politically." Gelb describes in intricate detail, and with lots of historical examples of their use, the many levers of power, including economic, diplomatic, and military. "More than ever" writes Gelb, "economics has become ingrained in power relationships, and leaders are just beginning to sort out how it can be made to serve larger strategic and power ends." The Chinese, notes Gelb, have become experts at translating their massive economic clout into other kinds of power.

Gelb also details the many limits on American power. He writes of the recent increase in "the power of the weak to resist the strong . . . at least on the weak's own turf," through insurgencies, and how weaker states can turn to a "relatively new array of international institutions and norms to protect their interests." Because of these limitations, Gelb asserts, "the United States uniquely has the power to lead, but certainly not dictate" global affairs. Gelb describes global clout as a pyramid with the United States on the top and nations such as Russia and China a tier below.

The best way for the United States to wield power, says Gelb, is through carefully crafted coalitions, particular among nations near the top of Gelb's pyramid of influence. "The solution is to forge cooperation within the top two tiers in particular," says Gelb. Yet before any power can be wielded, the United States must develop a strategy, an overall plan to maximize its power. Despite the essential nature of strategy, writes Gelb, "the United States does not now have one."

The key to developing strategy, writes Gelb, is having achievable goals. Gelb criticizes the past Bush administration for allegedly pursuing the impossible in Iraq and paying a heavy price for a lack of realistic thinking: "Washington lacked the power to transform Iraq into a democratic free-market paradise, and wasted enormous power on this pipe dream." Attempts to attain unachievable goals, such as spreading democracy across the Middle East, simply lead to diminished credibility, the author says.

Gelb favors a package of power, which includes military, economic, and diplomatic influence used in concert and, best of all, in collaboration with international partners. A pragmatist, Gelb steadfastly rejects foreign policies driven by ideological imperatives, such as the invasion of Iraq. Gelb's informative and well-crafted analysis is filled with rules for wielding power and goals worth striving for globally. Overall, his book will serve as an excellent primer for those seeking a common-sense approach to foreign policy. 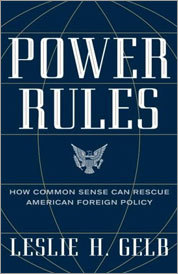