The hard truths about the new economy

Myth: Raising taxes will hurt our economy. Truth: Prominent Republicans (such as Newt Gingrich, John McCain's campaign economic guru) say taxes must go up, and the ride can be benign if we manage it prudently. Europe's high unemployment comes not from its high taxes but from dopey laws making it hard for companies to fire people, making executives skittish to hire except when it's unavoidable.

Myth: Businesses should provide health insurance; any government intervention will lead to socialism. Truth: Businesses are bailing out of insuring workers because the cost is crippling their competitiveness. Meanwhile, the Netherlands and Switzerland have top-flight, market-based care with generous government subsidies.

If any of the foregoing makes you do a double-take, read "The Tyranny of Dead Ideas." Matt Miller, a business consultant, journalist, and onetime aide in the Clinton administration, has written a fact-based, provocative, and persuasive critique of the cliched notions imprisoning our politics. And he gives us the truths that can set us free.

Most of the half-dozen "dead ideas" Miller upends are especially beloved by the right: free trade's gains always outweigh the pains; taxes are too high; business, not government, should handle health care and pensions; schools should be locally funded and run; and money always follows merit. One dead idea - our kids will earn more than we do - is more of a culture-wide expectation. But in showing why these ideas are wrong, Miller also demolishes a few stinkers treasured by progressives.

Free trade indisputably helps desperately impoverished countries, so protectionism is an inhumane way to curb its excesses, he writes. And conservatives are right that some taxes are too high. Tax-happy Scandinavians get a smaller share of national revenue from personal income taxes than we do, while our corporate taxes are the second-highest among industrialized countries. (Miller advocates consumption and energy taxes, along with modest income tax hikes on the rich, to pay for necessities like universal health insurance and the baby boom's impending residence at Happy Acres.)

Miller's less convincing points are largely trifles. Some of the hard truths he says we're reluctant to accept aren't news flashes, at least to policy wonks, who are the audience for this book. And the author dances an awkward two-step in defending businesspeople who simultaneously cut back on health insurance for their workers while decrying as socialism any government effort to fill in the gap. He says they're "decent people" who are confused, only to admit they're "deeply hypocritical" for tossing their laissez-faire principles out the window and pleading for a socialist federal lifeline in the current financial crisis.

Miller's on target when he says business is essential to the country's welfare and to the new policies that must overthrow dead ideas. That doesn't mean we shouldn't take it to task when appropriate.

Again, these are trifles. Near the end of the book, there's one more dead idea that's spiritual rather than political. That cliche holds that money buys happiness. Miller stakes it with common sense as well as scholarship. While well-off people are happier than the poor, it's worth remembering that even struggling, middle-class Americans live longer and more comfortably than most people on the planet. Miller also cites research showing that, regardless of income, people with full lives - friends, good family relations, and fulfilling activities, be they fishing or church-going - are happier than those without. As a New Republic magazine writer noted years ago, the hippies of the 1960s had it right when they preached that money isn't everything. 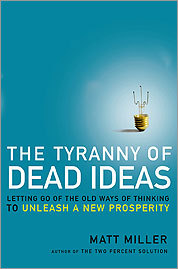 THE TYRANNY OF DEAD IDEAS: Letting Go of the Old Ways of Thinking to Unleash a New Prosperity By Matt Miller. Times Books, 259 pp., $25