Pearl returns to Boston with 'Dickens'

In 2003, Cambridge author Matthew Pearl created an international sensation with his Boston-based literary thriller, "The Dante Club," and with his second book, "The Poe Shadow," published in 2006. In "The Last Dickens," Pearl returns to Boston to solve a literary mystery, set to the backdrop of the opium and publishing trades.

It is 1870, and Charles Dickens, wildly popular on both sides of the Atlantic, has just died, leaving his last book, "The Mystery of Edwin Drood," half-finished. His Boston publisher, James Osgood of Fields, Osgood & Co., desperately needs to know the book's ending in order to stave off other publishers - notably, the unscrupulous Harper Brothers of New York - from publishing cheap, unauthorized copies.

Osgood dispatches his young clerk to Boston's waterfront to retrieve the latest installment of the "Drood" manuscript, shipped over from London. The clerk is pursued by book pirates - called "bookaneers" - and by a mysterious stranger. He is mortally wounded and found with needle tracks on his arm. The pages are missing.

To save his firm from financial ruin, Osgood, accompanied by Rebecca Sand, a bookkeeper at the publishing house and sister of the murdered clerk, embarks on a quest to determine if Dickens finished his manuscript, or at least knew how he would end it.

Osgood's quest takes him to London, to Dickens's English publisher, Christie's auction rooms, an opium den, and to Dickens's country house, and then back to Boston.

But things are not as they appear, and it becomes clear that those involved in the opium trade - not just the publishing trade - have a vested interest in the outcome of "Drood."

Pearl's strength is his masterful research; substantive plot twists are provided by the color of ink that Dickens used in his pen, a stalker based on a woman who actually hounded Charles Dickens, and Dickens's fascination with the murder of Boston's George Parkman.

But the plot often overreaches, and the reader loses sight of it, particularly in the less successful subplot - the opium wars in Bengal, India, involving Dickens's son Francis, with which the book confusingly begins. And when the coincidences continue to pile up, the reader's credulity becomes deeply strained.

While the plot goes its peripatetic way, individual words and sentences also lose their focus. Clunkers appear: "gallantly chuckling," "replied eerily," "casual downcast glare" (how can a glare be casual?), and anachronisms: "mind-set" (first used in 1909 according to the Oxford English Dictionary), "hassled" (1945, OED) ; and "de-Bostonize" (a locution with a decidedly modern tinge) serve to draw us away from 1870.

Clumsy sentences dot the text: "They caught each other in a mutual moment of unreserved shock." "Osgood whispered half brokenhearted and half triumphant." Most egregious: "Forster wrung his hands outstretched. 'I wring my hands at this' [he said]."

But don't blame all this on the author; even bestselling authors need assistance from their editor. An editor's job is to help an author write the best book possible - at least that's how I saw it when I worked as an editor for HarperCollins, a later incarnation of (gulp) the felonious Harper Brothers. This occasionally means protecting authors from themselves.

As Osgood said to Fletcher Harper, " 'We like our local authors very much. . . . You might say we believe our house works for our authors, rather than the other way around.' "

I wish Pearl's editor had taken this to heart. If his editor had applied a heavy hand to this manuscript and redirected Pearl's more errant flights of fancy, the result would have been a more cogent, credible, and well-written book.

Virginia A. Smith is a freelance writer. 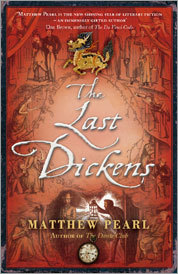 THE LAST DICKENS By Matthew Pearl