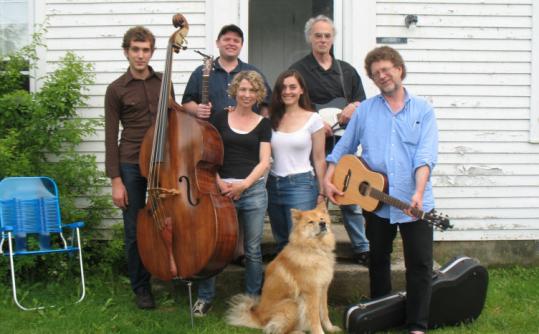 Rector lived in the Doghouse - so nicknamed because it's the living quarters for faculty with dogs - with his wife, Tree Swenson, and their dog Keeper.

After Rector died, in 2007, his friends in the Dog House Band settled on a way to pay homage. They've released a CD, "Let's Doghouse: A Tribute to Liam Rector," a rollicking, witty, and occasionally mournful mix of blues, country, and bluegrass songs. Standouts include "The Bottle Let Me Down," by Merle Haggard, and "One's on the Way," Shel Silverstein's tongue-in-cheek tune about a tired, pregnant mother whose husband isn't much help.

Profits from CD sales will fund a longtime priority of Rector's - scholarships for MFA students at Bennington, says Birkerts, director of the Bennington Writing Seminars. Details at www.thedoghouseband.blogspot.com.

The collectors
John Adams and Thomas Jefferson had their disagreements, but they found common ground in their love of books. Each had a library with thousands of volumes. "I cannot live without books," Jefferson wrote to Adams in 1815. Their mutual passion will be explored in the conference "John Adams and Thomas Jefferson: Libraries, Leadership and Legacy," being held June 21-27 in Boston and Charlottesville, Va. Jefferson's vacation library and Adams's marginalia are among the seminar topics. Details at www.adamsjefferson.com.
Sounds of silence
Myron Uhlberg was born during the Depression, the hearing son of deaf parents. From an early age, he was the go-between for his parents and the world beyond their Brooklyn, N.Y., apartment. It wasn't until he enrolled as a student at Brandeis University that he realized how unusual a role that was for a child.

Uhlberg revisited his upbringing in many of the books he has written for children, including "Dad, Jackie, and Me," inspired by a Brooklyn Dodgers game he and his father attended. Uhlberg's father admired Jackie Robinson for the way he faced up to racial prejudice.

In a new memoir, "Hands of My Father: A Hearing Boy, His Deaf Parents, and the Language of Love" (Bantam), Uhlberg looks back with pride and pain. He recalls the day his father, a pressman at the New York Daily News, took him to work and his co-workers called him "the dummy." Uhlberg was horrified. Years later, his father told him that he had been well aware of the insult but chose to ignore it. Instead, he focused on the love he felt for his son.

Coming out
"Inside the Apple: A Streetwise History of New York City," by Michelle Nevius and James Nevius (Free Press)

"Hunting Eichmann: How a Band of Survivors and a Young Spy Agency Chased Down the World's Most Notorious Nazi," by Neal Bascomb (Houghton Mifflin Harcourt)

Pick of the week
Tova Beiser of Brown University Bookstore, in Providence, recommends "The Little Sleep," by Paul Tremblay (Holt): "It's fast and fun, a noirish suspense novel featuring Mark Genevich, a hard-boiled, narcoleptic quasi-detective in South Boston. This is the first of what promises to be an engaging series."