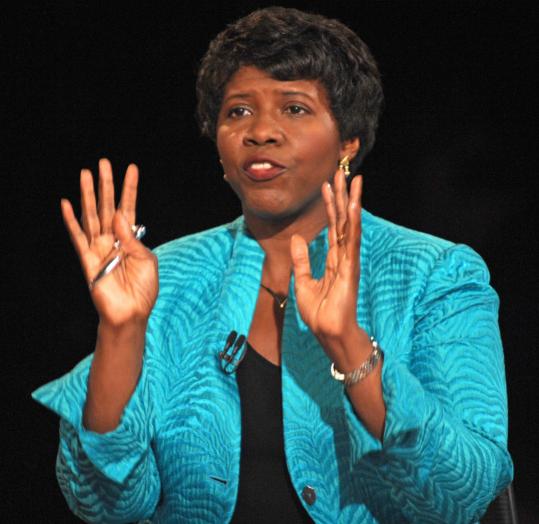 Veteran journalist Gwen Ifill has made a name for herself as a moderator and managing editor for the television news program "Washington Week" and a senior correspondent for "The NewsHour With Jim Lehrer." Apparently she's a multitasker. During a recent interview, she spent some of the time typing busily at her computer as she answered questions.

Although her mind was elsewhere, Ifill - who will receive the Ford Hall Forum's 2009 Louis P. and Evelyn Smith First Amendment Award tonight at the Old South Meeting House - made insightful comments about her new book, "The Breakthrough: Politics and Race in the Age of Obama." The book became controversial days before the vice presidential debate this past October after Republicans accused Ifill, the debate moderator, of writing a pro-Obama book.

"The Breakthrough" explores the new tactics a younger generation of black politicians including Cory Booker, Deval Patrick, and Barack Obama have developed to gain the diverse support needed to win political races. They are quite different from the politicians who emerged from the civil rights era and relied on redistricting to create majority black voting areas or focused on issues of concern to the people of color living in their communities.

"If you're these breakthrough politicians trying to reach across lines, build coalitions, and be elected by majority voters as well as minority voters, in order to do that you have to speak to everybody and not just interest groups," Ifill said. "It's a different way, a different path for these younger politicians."

That doesn't mean these politicians are abandoning the needs of communities of color, she said. Many of the politicians in this new generation have tackled the issue of health care. But instead of focusing on black people suffering disproportionately from a lack of access, she said, these "breakthrough politicians" try to fix the system. That, in turn, helps those in the black community as well.

Ifill has local ties. The New York City native went to high school in Springfield and earned her undergraduate degree at Simmons College. While at Simmons, she interned at the Boston Herald and worked there after graduating in 1977. Now she's the author of a book that hit No. 25 on The New York Times bestseller list. Though some people may remember the 266-page book for the controversy it stirred last year, Ifill called the controversy "manufactured." Only one chapter, comprising 18 pages, focuses specifically on Obama.

"Now that the book is out, people know it's not true," Ifill said. "The Obama chapter wasn't written because I didn't know what the outcome would be."