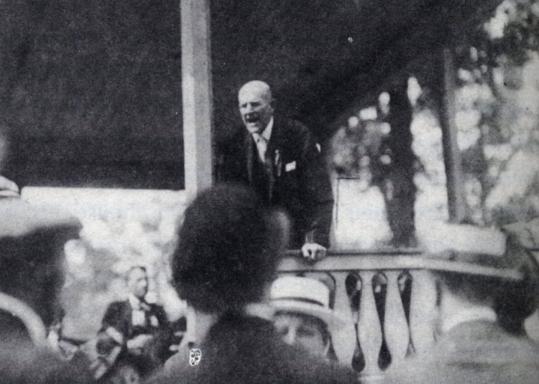 Eugene Debs (shown above in Ohio) was one of thousands of Americans arrested for voicing opposition to the war. (National Archives and Record Administration, Great Lakes Region (Chicago))
By Eric Arnesen January 4, 2009
Text size – +

UNCLE SAM WANTS YOU: World War I and the Making of the Modern American Citizen
By Christopher Capozzola
Oxford University, 334 pp., illustrated, $34.95

Rarely do the principles of individual rights and liberties conflict more with the notion of citizens' obligations to the government than during wartime. Does national security - real or imagined - require restrictions on or even suspension of the right to dissent if that dissent threatens to undermine the war effort? Since the 1920s the answer is generally, if cautiously, no. That wasn't the case during World War I, when the administration of Woodrow Wilson cracked down hard on war opponents, jailing thousands for allegedly disloyal statements. The insistence on obedience to governmental authority simply swept rights away.

Historians Ernest Freeberg and Christopher Capozzola revisit the issues of dissent, obligation, and repression in their new books on the World War I era. The stories they tell, in part, are familiar ones: In a nation divided over entry into the Great War, the Wilson administration grossly abridged civil liberties. Government propaganda agencies sold the war while new Espionage and Sedition Acts provided legal justification for censorship of the mail and the prosecution of thousands. Encouraged by the government, private volunteer associations lent a helping hand by spying on neighbors, pulling books off library shelves, harassing labor organizers, and strong-arming fellow citizens into buying war bonds. Governmental and nongovernmental coercion meant that citizens exercised their abridged rights at their peril.

Freeberg's "Democracy's Prisoner" explores the arrest, prosecution, and imprisonment of Eugene V. Debs and the subsequent campaign to free him from a federal penitentiary. America's best-known socialist, Debs was loved by the party faithful and despised by conservatives as a traitor. For speaking out against the war, he became one of some 2,000 people arrested, and 1,200 convicted, for challenging the Wilson administration's war policy. Sentenced to 10 years in prison, Debs immediately became a cause c??l??bre to socialists, trade unionists, and civil libertarians. A model prisoner who won the respect of his jailers and fellow inmates, he ran for president as "Convict 9653"and won almost 1 million votes in the 1920 election.

Freeberg's contribution lies in his treatment of the movement for Debs's release. The Socialist Party, battered by repression and crippled by internal factionalism and its own ideological delusions, protested loudly and ineffectively, predicting a general strike that never materialized and settling for a picket line at the White House. A more moderate and less flamboyant campaign waged by Lucy Robins, a Jewish immigrant and former cigar maker, built a broader alliance to lobby the government for the release of Debs and other "political prisoners." In the end, the protesters prevailed. Many of those convicted for their wartime dissent walked free in the early 1920s. But the government hesitated to release Debs. Fearing a conservative backlash for commuting the sentence of America's most notorious radical, and an unrepentant one at that, the Wilson and Harding administrations held back. Eventually, as anti-radical passions cooled and the crusade to free Debs intensified, the elderly, physically impaired socialist leader became a free man in late 1921.

Governmental repression is only one of the subjects of Capozzola's broader but more academic study. Wartime mobilization, he argues, redefined the citizen's relationship to the state. A Selective Service Act touched unprecedented numbers of American men; federal officials scrutinized conscientious objectors and registered German aliens; and agencies issued vast streams of pro-war propaganda. Yet "Americans consistently needed less outright repression than the wartime alarmists claimed," for countless people eagerly volunteered to police themselves and their communities by physically attacking strikers, burning books, and even lynching suspected traitors. During the war, the "actions of repressive state institutions, private organizations, and spontaneous crowds left more than seventy Americans dead and thousands terrorized by tar, flame, or the noose," Capozzola writes. Uncle Sam "invoked a culture of obligation," and many Americans readily complied.

If wartime repression received enthusiastic, widespread support, it also generated principled and eloquent opposition. Prior to the war, Freeberg observes, few exhibited much interest in civil liberties. But before wartime passions had cooled, a "small but growing number of Americans" committed themselves to the defense of "the rights of radicals, minorities, artists, and other dissenters." Capozzola also concludes that one of the war's legacies was the emergence of a "tentative and fragmented coalition"that used "rights as a weapon of defense" for civil liberties against the pervasive culture of obligation that sought to extinguish them.

The extent to which the still precarious balance between national security and civil liberties has shifted more toward the preservation of the latter over the past century can be attributed, in large part, to the rights constituency that emerged out of the homefront battles of the Great War. The amnesty and free-speech techniques pioneered during this period have become, in Freeberg's words, "a familiar part of the American political conversation." In their timely, readable, and engaging books, Freeberg and Capozzola remind us of the fragility of rights in the context of fear, providing us with cautionary tales about what is lost when unquestioned political obligations trump the preservation of liberty.

Eric Arnesen is professor of history at the University of Illinois at Chicago.

DEMOCRACY'S PRISONER: Eugene V. Debs, the Great War, and the Right to Dissent By Ernest Freeberg

UNCLE SAM WANTS YOU: World War I and the Making of the Modern American Citizen By Christopher Capozzola