There are three F's in Brady Bledsoe's life: family, faith, and football (a natural given his name). He's a straight-A college senior, a contender for the Heisman Trophy, a regular churchgoer, and a member of the "Celibacy Circle." Brady also has a great relationship with his mother, Carmyn, who owns a successful beauty salon in Atlanta. Single and independent, she has devoted her life to raising her son and has taught him good morals.

Are they "Just Too Good to Be True"?

That's the focus and title of E. Lynn Harris's latest novel, which continues his literary exploration of everyday, middle-class black America. The action takes place on and off the gridiron at the fictional Central Georgia University campus, where Harris chronicles the lives, loves, and secrets of mother and son, and also examines the clandestine recruiting tactics of shady sports agents.

Harris deftly illustrates the strong loving bond between Brady and his mother. They feel like real people, thanks to the author's gradual revelation of their individual complexities. Brady, supposedly a virgin, may have fathered a baby. Meanwhile, Carmyn is harboring a secret about Brady's birth.

Complicating matters is the introduction of Raquel Murphy, a temptress hired by a sports agent to trick Brady into signing with him. Raquel masquerades as a sexy cheerleader and pulls out all the stops to score with Brady. She causes friction between him and his mother.

Harris mines his background as a college professor and cheerleading coach in Arkansas to good use here, providing journalistic detail of cheerleading culture and football life. Occasionally, though, the accounts of the action on the field can prove distracting for a nonsports fan.

Although Brady is the star of the team and the main character, it's his mother who steals the show. Carmyn's first-person chapters resonate the most. She expresses her boundless love for her son and the sacrifices she's made so that Brady doesn't repeat the same mistakes she made as a teenager. Through Carmyn, the reader meets a strong single mother who has found success and independence as a salon owner. She personifies the joys of motherhood and the challenges of learning when to let go.

The book is an engrossing read. Often, the plot feels busier than a football game: Brady has to confront his mother's past, cope with his sexual desires, help his best friend, lead his team, avoid blackmail, and finish college on a high note.

That aside, Harris manages to score a literary touchdown with his latest outing.

Johnny Diaz is a member of the Globe staff.

More in Off the Shelf
Greater Boston author readings March 2-8 SUNDAY: Bill Alberti (“Once Upon a Sunrise”) and Louise... 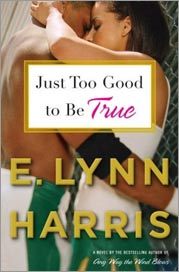 JUST TOO GOOD TO BE TRUE By E. Lynn Harris