How Churchill took the reins of the military 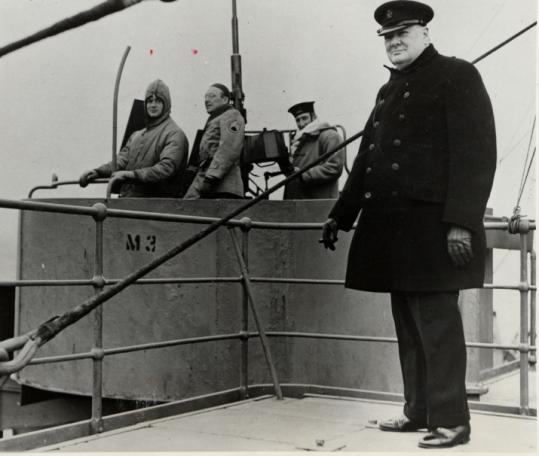 I am one of the last people outside of the Churchill family to have stayed at Chartwell, Winston Churchill's home in Kent, England, while the former prime minister was alive. I was taken there for a weekend in the 1960s by my quasi-godfather, Field Marshal Bernard Montgomery, to meet the great "generalissimo" under whom he had served in World War II.

Monty had many stories to tell: how, when he urged Churchill to fire the fogies in charge of Britain's army after Dunkirk and boasted that he himself didn't drink or smoke and was 100 percent fit, the nearly 67-year-old prime minister had eyed him with astonishment. "I smoke, I drink - and I'm 200 percent fit!" Churchill had retorted.

Or the time, several weeks before D-day, when Churchill came to Monty's headquarters at Portsmouth, where the invasion army was assembling, to complain about certain details: the ratio of typists to riflemen, in particular. Churchill had wanted to address Monty's staff on the subject, but Monty wouldn't let him. Monty was the Allied Land Forces commander, and could not permit such interference - it could suggest in his staff's mind that the prime minister had doubts about the historic operation. Churchill began to weep, and Monty, embarrassed, handed him his handkerchief - thinking of the four years of relentless, often-agonizing decision-making the leader had shouldered since May 10, 1940, when Hitler invaded the West. "You see, Nigel, without him we would never have held out," Monty explained in retrospect. "But with him, we made every mistake in the book!"

I have never forgotten that remark, and for 10 years, as Montgomery's official biographer, I researched and published the field marshal's side of the military equation: What it was like to fight the Germans under a meddling generalissimo whose tactical and strategic ideas had been molded in the 19th century as a young cavalryman, at the height of the British empire - yet whose rhetoric and moral courage had inspired the free world. Now an American historian has come forward to present that story from Churchill's point of view in "Warlord" - and what a story it is!

Carlo D'Este has already written some brilliantly clear, well-researched, and well-balanced books about World War II campaigns; also, more recently, fine military biographies of Generals Patton and Eisenhower. Having served in combat in Vietnam and lived in Britain, he has a far better understanding of Anglo-American wartime relations in a military alliance than, for example, the younger, prize-winning American journalist Rick Atkinson. In his new biography of Churchill as a military commander D'Este is thus much closer to the late William Manchester in his ability to select those telling anecdotes that allow us to inhabit the mind of his subject.

What D'Este has understood is that the half-American prime minister of Great Britain took upon himself in World War II a similar role to US presidents. Thus when Prime Minister Neville Chamberlain resigned in May 1940, Churchill not only accepted the king's request that he lead the British government as Chamberlain's successor, but also made himself minister of defense - or commander in chief of Britain's air, naval, and army forces.

For five years, until voted out of office in 1945, Churchill ruled the British military roost. From the disastrous British invasion of Norway in 1940 to his wild calls for counterattack at Dunkirk, his ill-fated attempt to liberate Rhodes, and his even madder plan to strike the "soft underbelly" of Axis-occupied Europe at Anzio in 1944, Churchill made more mistakes than any prime minister since the loss of Britain's American colonies.

Unarguably, Churchill's is the greatest military life of the 20th century - a life that has never been fully told. From military college to the Afghan mountains, the Sudan, and South Africa, and in World War I, Churchill learned more about combat soldiering than any president since Theodore Roosevelt, and any prime minister save Wellington. In World War II this proved Britain's saving grace - not because Churchill made the right military decisions, but because, as D'Este describes, he whipped Britain's naval, air force, army, intelligence, and commando forces into combined action.

That it has taken an American historian to recognize this, and do justice to Churchill's fighting career, would not have surprised Jennie Jerome, Churchill's mother, who was born in New York. For his part, Montgomery remained forever proud to have served under such a unique generalissimo, and would have loved the candor and clarity with which D'Este has told his epic story: a brilliantly exciting narrative that sweeps aside the fawning obsequies of four decades of posthumous British and American cant. D'Este has given us, finally, the lion not only in winter, but at war: impetuous, brazen, misguided, but indefatigable, indomitable, and magnanimous: the greatest and most energetic generalissimo of the 20th century.

Nigel Hamilton won the Templer Medal for Military History. He is a senior fellow at the McCormack Graduate School of Policy Studies, UMass-Boston.