How blue can you get?

Mississippi Delta was the boisterous cradle of the art form 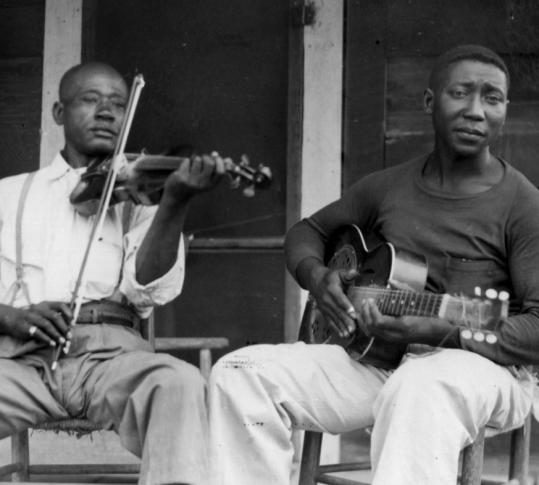 DELTA BLUES: The Life and Times of the Mississippi Masters Who Revolutionized American Music
By Ted Gioia
Norton, 449 pp., illustrated, $27.95

"If soundscapes were as tangible as buildings," Ted Gioia says in his new music history, "Delta Blues," "grand pyramids and skyscrapers would rise high above the 38614 ZIP code."

Books about the blues might not be quite numerous enough to form a skyscraper, but a small pyramid of works on the subject has been published in the past quarter-century.

In marking out his territory, Gioia mostly confines himself to the sound that came out of the 38614 area - Clarksdale, Miss., and the Mississippi Delta. Like a bluesman trotting out his repertoire of classic licks, Gioia is following in the footsteps of some influential predecessors, including Robert Palmer's groundbreaking "Deep Blues" and musicologist Alan Lomax's "The Land Where the Blues Began." Not every riff in "Delta Blues" is Gioia's own, but it is nonetheless an engaging new introduction to one of the great American musical forms.

In a certain light, "Delta Blues" is an extended cover version of "Deep Blues," with Gioia writing about the same figures, utilizing many of the same anecdotes, and following the same path from the vanished South of work hollers and lone guitarists in ramshackle hovels to the polished electric blues of Chicago. Gioia is not merely an appropriator; "Delta Blues" has a verve of its own.

The story of the blues begins in Africa. The vocal and instrumental patterns of the blues bear some similarity to the music of Senegambia, where many American slaves hailed from, and West Africa has a long tradition of solo performers accompanying themselves on stringed instruments. In the United States, the blues thrived in places where popular culture had the weakest hold, in "communities almost completely cut off from the hustle and bustle of city life, in groups largely untouched by outside influences."

When it came to poverty and lack of contact with the outside world, few regions, even in the South, could compete with the Mississippi Delta. Some two generations after the end of the Civil War, African-Americans in the area found conditions not much improved, with the only jobs to be had working on cotton plantations for what amounted to slave wages. In dark times, music was a suppurating wound, and the balm that, at least temporarily, could heal it.

"I know why the best blues artists come from Mississippi," blues legend John Lee Hooker suggested. "Because it's the worst state. You have the blues all right if you're down in Mississippi."

Gioia begins with W. C. Handy, a onetime busker for Memphis politicians who discovered the blues and prettified it for mass consumption, and Charley Patton, "a hard-drinking, loose-living, work-shirking field hand" with a remarkable talent for the guitar. He then steers his narrative toward the well-known Delta greats - boldface names like Robert Johnson, Howlin' Wolf, and Muddy Waters - as well as forgotten figures whose recorded output might not be enough to fill an entire compact disc, like Geeshie Wiley and Mattie May Thomas.

The blues found itself as America suddenly found itself in need of it. The Great Depression struck as the first wave of blues musicians was being recorded, which was bad timing for the careers of those involved. Columbia Records went from printing 11,000 copies of each new record to as few as 350. While blues performers would have preferred it otherwise, the relative lack of success also preserved the form as it was for another generation, since the recording industry did not give itself the pleasure of transforming the music into something more palatable for the pop charts.

Second-wave bluesmen like B. B. King and Hooker oversaw its move north, packing the blues' sexual swagger and pounding rhythm while making it a collective, rather than a solo, endeavor. The success of the blues in Chicago led to a surge in interest in its Delta roots, and music investigators began knocking on doors in search of the original bluesmen. Long-forgotten singers like Skip James returned to the stage for a new generation of blues fans who treated him like "a quasi-mythical figure from the past."

Gioia's deep understanding and appreciation of the blues lead to impressive insights about the music. "Delta Blues" provides an understanding of not only the musicians, but the music itself. Patton's singing style was unique because in contrast to most guitarists, who sing "above" their instruments, "his voice moved in between the tones of his Stella: sliding, growling, declaiming.

This was not singing a song; rather, it was becoming the song." Most blues songs began raggedly, only gradually settling into a groove because the musicians did not count off beforehand, preferring to " 'find' the beat collectively during the opening few bars." Gioia has done an impressive amount of footwork, seeking answers to nagging questions like "Were Kid Bailey and Killer Bailey the same person?" Unfortunately, Gioia also has a tendency to repeat his favorite anecdotes. "Delta Blues" owes too much to its forebears to be considered strictly original work; the influence of Palmer, Lomax, and numerous others can be spotted on nearly every page.

But shouldn't a work about the blues take tradition into account? Gioia takes a good old song and adds a few ace licks of his own.

Saul Austerlitz is a frequent contributor to the Globe.

DELTA BLUES: The Life and Times of the Mississippi Masters Who Revolutionized American Music