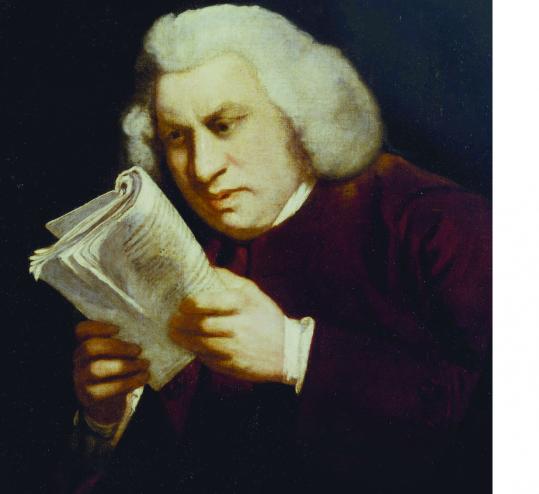 Two new biographies of Samuel Johnson, Peter Martin's "Samuel Johnson: A Biography" and Jeffrey Meyers's "Samuel Johnson: The Struggle," have appeared just in time for next year's tercentenary of his birth. Since James Boswell's biography is widely considered not just the first but the best of its genre in English, and dozens of additional Johnson biographies have been published since, you might wonder why anyone would be brave enough to enter the lists. The reason is that along with Napoleon, Lincoln, and Alexander the Great, Johnson is one of the most irresistible subjects who ever lived.

He was born deaf in one ear and blind in one eye, and his other eye was damaged. His wet-nurse infected him with scrofula (tuberculosis of the lymph nodes), which left him with disfiguring scars. A hulking, large-boned, unattractive man, he was afflicted from an early age with tics and spastic movements. Meeting him for the first time, many thought he was a madman escaped from an asylum.

Johnson began his career as a hack writer on Grub Street and endured poverty and neglect for decades. He was repeatedly arrested for debt. Cursed throughout his life by self-doubt and guilt, he was also afflicted with such profound melancholia that he constantly feared for his sanity. The torments of what Samuel Beckett called "the monster-ridden swamp" of his mind were sometimes so severe that Johnson said he couldn't tell the hour on the town clock, and once told a doctor "I would consent to have a limb amputated to recover my spirits." He frequently said that the great business of his life was to escape from himself.

In the course of that escape, he became one of the giants of our literature. Poet, essayist, novelist, lexicographer, critic, biographer, moralist, and one of the greatest conversationalists in recorded history, he is our most quoted writer after Shakespeare. Johnson was a notorious procrastinator, but when he finally set to work, his speed was phenomenal. He could write 30 words a minute, which is faster than most people can transcribe, and he once composed 180 pages in 36 hours. He wrote his best-selling novel "Rasselas" in the evenings of one week, and with only minimal help from a few copyists he produced his dictionary in nine years. (The 40 members of the French Academy labored 55 years to produce the first French dictionary.)

He wrote on biology, agriculture, metaphysics, medicine, the novel, chemistry, philology, military science, travel, classical scholarship, geography, religion and ethics, biography, politics, zoology, aesthetics, optics, cartography, poetry, international relations, public affairs, and Chinese architecture, as well as a host of practical matters such as brewing, coinage, peat digging, and beekeeping. And throughout what he called "the general disease of my life," a life he incidentally transformed into a moral exemplum for posterity, he was unfailingly witty and hilariously funny. The novelist Fanny Burney said, "Dr. Johnson has more fun, & comical humour, & Laughable nonsense about him, than almost anybody I ever saw." He fed his cat oysters, put coins in the hands of sleeping children on his way home at night, and left his estate to a freed slave from Jamaica. How could a biographer resist?

Both of these new books offer informed, sprightly reads, and they increase our knowledge by presenting a more sexual and tormented Johnson than we've known. Martin's book contains a helpful map, handsome illustrations, and an excellent bibliography. Martin is especially good on Johnson's politics and his final days, and at his best he writes in an attractive, reader-friendly style. But the book would've benefited more from an editor's touch. Martin is given to ugly diction such as "pretentiousness" for "pretension," "celebrative" for "celebratory," and "rigorousness" for "rigor." "Well-heeled" people "opt" for "trendy stories" so they can "tune into" an idea. And surely someone could have translated "knock-on effect," "gaudy," "cover-sluts," "gild button," and "sponging house." The book is further marred by some errors, such as saying Johnson's essay Rambler 39 was about sleep when that was the topic of Adventurer 39, and grammatical mistakes, as when Martin writes that nothing is known for sure "of whom else he met" and that one version of a story "seems at least as likely than the way Boswell told it."

It's a relief to turn to Meyers's relatively error-free book, which also provides an informative final chapter discussing Johnson's influence on Austen, Hawthorne, Housman, Woolf, Nabokov, and Beckett ("It's Johnson, always Johnson, who is with me"). Meyers is also better than Martin at illustrating historical and cultural context.

In Martin, the poor in 18th century England are treated harshly; in Meyers, a 7-year-old girl is hanged for stealing a petticoat. In Martin, London is filthy; in Meyers, the air is so polluted with coal smoke that, after a while, Johnson no longer notices the change of seasons.

Yet neither of these books supersedes Walter Jackson Bate's magisterial biography of 1977. Bate is the best critic of the three, and he tops all of the biographers in describing the operations of Johnson's mind and the precise character of his conversation. Bate proves the truth of Matthew Arnold's encomium of Johnson: "The more we study him, the higher will be our esteem for the power of his mind, the width of his interests, the largeness of his knowledge, the freshness, fearlessness, and strength of his judgments." Not to mention the deep humanity and sheer boisterous fun of him.

Alan Helms, professor emeritus at the University of Massachusetts, Boston, is dance critic for Bay Windows.