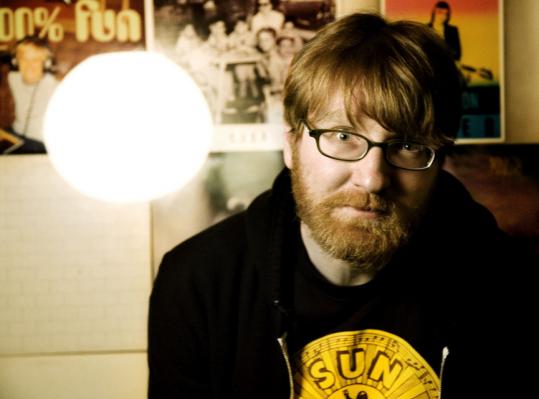 In his debut novel, Chuck Klosterman makes all the mistakes you'd expect of a best-selling pop culture critic who describes his own work as "philosophy for shallow people." He overwrites, for instance. Within the first 15 pages, we are subjected to a sun "burning and falling like the Hindenburg," the northern plains "pounded by a rolling pin," and an octogenarian whose "lazy eye [drifts] around the room like a child looking for a bathroom." He reduces half his characters to mouthpieces for his esoteric theorizing. He goes crazy with lists.

But a funny thing happens on the way to the end of "Downtown Owl": It becomes an astonishingly moving book, a minor masterpiece in the genre we might call small-town quirkiana. Klosterman is a real writer, it turns out, full of pathos and wisdom, ultimately determined to place his cleverness in the service of his characters.

The book traces the fate of various residents of tiny Owl, N.D., as they stumble toward the ominous winter of 1984, and one of the worst storms in history. There's no attempt to contrive a traditional plot, which is to say: None of these characters meet and have life-affirming interactions. Instead, Klosterman's brief chapters capture those unsuspecting moments when our obsessions yield larger truths.

Mitch Hrlicka, a high school senior and third-string quarterback, devotes most of his mental energy to a consideration of who would win a fight between the two toughest kids at his school. Klosterman nails the way teenagers speak, their peculiar blend of bravado and insecurity, and he understands their bluster as a hedge against the humiliations of adolescence and the bleak prospects that await them.

More impressive is his ability to channel Julia Rabia, a young teacher who moves to Owl and finds herself, disorientingly, wooed by every eligible man in town. Her only viable love interest (and he just barely) is Vance Druid, a former high school quarterback who became a local legend based on a single fluky play later aired on ESPN.

Klosterman illuminates their halting courtship by articulating what they can't say to each other, and only half understand themselves. "It's hard for average Americans to differentiate between talent and notoriety," Vance muses at one point. "TV confuses people. It confused me, too. It made me naïve."

He later observes Julia, whose loneliness drives her to alcoholic excess, falling "with an unfathomable, zombielike slowness; it was as if she were wearing a parachute. . . . 'I need to change my ways,' said Julia. 'I can't keep doing these things. I can't keep living like this.' Like all self-destructive creatures, she completely meant these words, but only while she spoke them."

This isn't Klosterman condescending to his characters. He's doing the honest labor of a novelist, exposing the terrifying confusions that live within his characters. His ability to see past their evasions, and his determination to lay them bare with stabbing insights, calls to mind another famous American satirist, Kurt Vonnegut.

If this sounds like heresy to those who worship at the altar of Kurt (I include myself in this cult), I would ask you to consider his most ingenious creation: Horace Jones, a 73-year-old widower who does little more than drink coffee and kvetch.

"And what was money?" Horace asks. "It was merely a temptation to commit wrong. Rich people weren't happy. They were generally miserable and usually confused. Most of the time they didn't even realize they were rich; almost without exception, they wrongly viewed themselves as middle-class."

Klosterman consistently pulls off a narrative feat most closely associated with Vonnegut. He is able to survey his fictional world with a benevolent omniscience.

When the storm finally descends on Owl, we feel the impact not just in raw physical terms but as a reflection of the spiritual isolation the motley cast has been suffering all along.

The final pages of the novel offer a climax worthy of Jack London. Nature strips each of his characters to essentials. One wanders toward his death. "He didn't feel cold or warm. There were no more feelings. He was blood and lumber." Another finds the strength to survive a small, unheralded miracle of human perseverance.

There are any number of critics, I suspect, who will delight in dismissing "Downtown Owl" as a stunt, and Klosterman as a wannabe who should return to his pop culture kennel. I can only hope he disregards these voices. The act of imagining has activated within him a greater capacity for feeling.

This is not to suggest he's lost his comic fastball. The book made me laugh a great deal. Klosterman has impeccable comic timing, and an unflinching eye for our hidden absurdities. But I was riveted by its quietly tragic moments, for the simple reason that I had grown to care about his people. His barbed affection for them had infected me. What more can we ask of any novel?

Steve Almond's new collection of essays is "(Not That You Asked)."