Tracing V. S. Naipaul's efforts to fashion his own identity and succeed as a writer 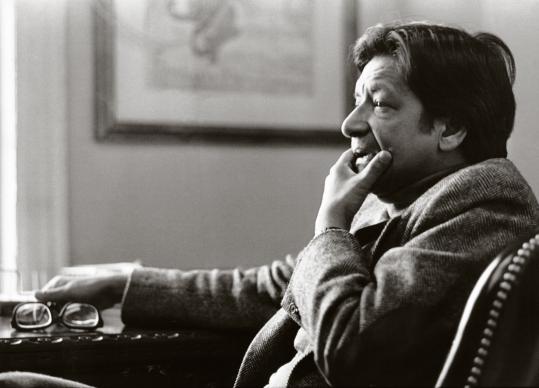 Naipaul, writes Patrick French, wanted ''to escape the periphery for the centre, to leave the powerless for the powerful.'' (Neal Boenzi/The New York Times)
By Alexander Theroux November 23, 2008
Text size – +

THE WORLD IS WHAT IT IS: The Authorized Biography of V. S. Naipaul
By Patrick French
Knopf, 554 pp., illustrated, $30

When he went to Oxford from the Caribbean in 1950, at age 17, V. S. Naipaul was a British subject of Indian descent who resided in the West Indies, specifically Trinidad, an "accidental occidental Indian from the most amusing island that ever dotted the sea," as one wit put it.

The question of identity is as crucial to Naipaul's books as it was to the man himself. He wanted to be called not a West Indian, but "a Trinidadian of Hindu descent." His small size (5 feet 6), dark skin, and island profile made this brilliant writer a touchy, class-conscious character all of his life.

To say that Vidia Naipaul was merely complicated seems an understatement. In his authorized biography "The World Is What It Is," Patrick French shows us a man at once "angry, acute, open, self-pitying, funny, sarcastic, tearful." It is high testament to French - as well as to the acceding Naipaul - that the writer insisted on being as impeccably objective as possible and that he chose to "expose the subject with ruthless clarity."

An asthmatic, Naipaul was the pampered oldest son in a successful family of girls and one younger brother. He wanted to be wealthy. He wanted to succeed. "I like luxury," he said. "I take to it easily, and feel it is mine by right." This ambitious fellow, who would eventually receive a knighthood, become a multimillionaire, and win the Nobel Prize for Literature, knew early that he was meant for larger things, and as French puts it, he certainly "did not want to be classified alongside people who climbed off banana boats wearing zoot-suits and wanted jobs in factories."

An admitted snob, Naipaul was at odds not only with the Third World but with pop entertainment, pop politics, pop lifestyles. "He detested hippies, yippies, beatniks, free school, flower power, Black Power, flag burning, hair growing, sit-ins, be-ins, teach-ins and love-ins," states French. He bewailed the attention the Beatles received, angering many readers of the Saturday Evening Post when in an essay, "What's Wrong With Being a Snob?," he lamented that "entertainers from the slums [have] replaced the Queen as a cause for national pride."

Moreover, Naipaul was famously frugal. He did his own accounts and bookkeeping (with his first wife's help) and was more than happy when possible to take advantage of offers for extended stays in various friends' houses or flats to save money.

I met him once at Wheeler's over dinner, which I shared with him and my brother Paul, in London in 1969. Naipaul questioned me on why in the light of Vietnam I would accept from the US government a Fulbright grant, like some sort of craven, low-brow mendicant. At that time, I had no money at all. He, on the other hand, had just received £3,500 from the British Arts Council bursary, taken a grant from the Farfield Foundation to teach at Makerere University, in Uganda, and basically taken every bit of free money he could get. And did I mention that at that dinner, Paul (who later had a public falling-out with Naipaul) paid the bill?

This candid book recounts that while Naipaul was generally tough on people, he was perhaps harshest on those nearest to him. Patricia Hale, his first wife, was a shy, gentle, virtuous Oxford grad from a working-class family. They married in secret in 1955 - both were 22 - and it was she who was on the receiving end of Naipaul's irritability for most of her life.

The couple were childless. She served as his helpmeet, secretary, dogsbody, although she had had dreams of writing herself and continued working on a diary right up until 1995, the year before she died at age 63 of liver cancer. I was particularly struck in reading "The World Is What It Is" to see to what degree Pat had to run interference for him in trivial matters and how she had to suffer for it, a veritable theme in this biography.

By 1958, with an increasingly diminished physical attraction to his wife, Naipaul began a habit of visiting brothels, pointing to a need for comfort and citing his own inability as a seducer by way of rationalization. "His conception of himself was too fragile and narcissistic for his personality to be merged with another," notes French. "He depended on the idea of his own singularity: without it, he might crack. Pat could support and enable him, but she could not share in creating."

She was forever on call. He dictated much of his novel "A Bend in the River" to Pat, while at the same time he had been secretly carrying on a passionate affair for two years with an Anglo-Argentine divorcee with three children named Margaret Gooding, who was 10 years his junior.

While I found little to criticize in this well-researched and fair-minded undertaking, I did note that French does seem to treat Gooding somewhat harshly. Gooding, who would remain Naipaul's lover and often his victim for almost a quarter of a century, effectively replaced Pat as his wife until he abruptly dropped her in 1996 for his present wife, Nadira Alvi, 21 years younger than him.

Generally, though, French skews nothing and has worked as hard as possible to illuminate aspects of a life full of entanglements and opposing selves. In the end, it's apparent that Naipaul could not have done other than what he did in life. "I don't believe they understand how much I am afraid of organizations, intrigue, jobs, regular duties," he wrote to Lady Antonia Fraser. He was destined to be the kind of writer he became, the dissatisfied peripatetic who wanders the very world he grouses about.

Alexander Theroux is the author of many books, including "Laura Warholic: Or, The Sexual Intellectual."

THE WORLD IS WHAT IT IS: The Authorized Biography of V. S. Naipaul By Patrick French