Putting all the pieces together

A new book chronicles the history of scrapbooking in America 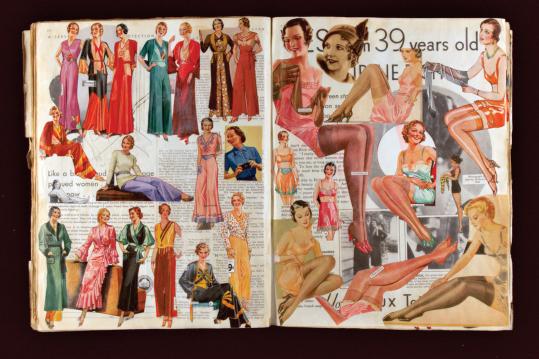 NEW HAVEN - In his "Devil's Dictionary," Ambrose Bierce defined "scrap-book" as "A book that is commonly edited by a fool." Well, there must be a lot of fools out there. Scrapbooking, which has been described as the fastest-growing hobby in America, is a $3 billion-a-year industry. You get 2.3 million entries when you Google "crocheting." Google "scrapbooking" and you get 28 million.

Also, "fool" is a relative term. Past scrapbookers include Lillian Hellman, Zelda Fitzgerald, Saul Steinberg, and Anne Sexton, who included in her scrapbook not just her first efforts at verse but the key from the motel room where she and her husband spent their wedding night. "Scrapbook-making volunteers" put together memory books for military personnel serving overseas during both world wars. And while Mark Twain wasn't a scrapbooker, per se, he invented a "self-pasting" scrapbook, which earned him more than $50,000 in royalties.

Nor is scrapbooking just a throwback. What are Facebook and My-Space pages but the pursuit of scrapbooking by digital means?

About five years ago, Jessica Helfand was working on a project that required her spending a lot of time in art-supply stores. "I noticed all these scrapbooking supplies," she recalled in an interview at the Yale School of Art, where she teaches, "and I was fascinated."

Scrapbooking, with its unexpected past and highly lucrative present, represents a mother lode of do-it-yourself aesthetics. Randomly choose any of the 475 illustrations in Helfand's just-published "Scrapbooks: An American History" and expect to be startled, enchanted, vexed, or all three.

"The scrapbook," Helfand writes, "was the original open-source technology, a unique form of self-expression that celebrated visual sampling, culture mixing, and the appropriation and redistribution of existing media."

Helfand, 48, teaches graphic design at Yale and is co-principal with her husband, William Drenttel, of the design firm Winterhouse. She and Drenttel are also cofounders, along with Michael Bierut, of what has become the graphic designer blog of choice, Design Observer (www.designobserver.com). It averages a million hits a month.

After graduating from Yale, Helfand worked as a secretary at an ad firm, then as a soap opera writer. A few years of "Guiding Light" and "Search for Tomorrow" were enough to send her back to Yale for graduate work in design. Intense and articulate, Helfand has a snaggly smile and agile mind. She is that rare person - and very rare visual person - who speaks in paragraphs.

Winterhouse designs everything from book jackets to corporate identities. Clients include The New England Journal of Medicine, the Norman Rockwell Museum, and filmmaker Errol Morris, whose website Helfand and Drenttel designed.

"I've learned a lot from them," Morris said in a recent telephone interview. "What more can you ask from people? Jessica is such a rare combination of intellect and visual acuity. And Design Observer is great. It's one of those places that I go to routinely because there's always interesting stuff there."

Design Observer is where "Scrapbooks" got its start.

The more Helfand, who'd never kept a scrapbook, thought about scrapbooking, the more she realized that the activity was less alien than she had realized. She wrote an essay for the website, "Scrapbooking: The New Paste-Up," paste-up being the primary means of doing graphic layouts before computers.

"Scrapbooking," Helfand said, "operates on what is essentially the common currency of graphic design, pictures and words that tell stories. That is what I do. That's what I've been trained to do. And here were these people with no training, with no knowledge, spending lots of money, being very wrapped up in this thing."

Helfand had little idea for the one-two punch she'd let herself in for. "I was vilified by the scrapbookers," she said, "who could find us by keyword speech, and saw that I was writing critically about this very homespun activity. I had a top-down view, they had a bottom-up view. And then the graphic-design contingent got on board and started to attack the scrapbookers, whom they called 'crapbookers.' So, 185 comments later, my e-mail was absolute mayhem."

Helfand may have compared scrapbooking to pre-computer design, but the Web has made its handiworks highly collectible. "If my husband were here he'd say, 'You couldn't have done this book without , because you couldn't have been online with your laptop looking at scrapbooks after the kids were in bed.' " Helfand, who has more than 200 scrapbooks in her collection, says vintage books can sell for as much as several hundred dollars.

Although Helfand started collecting scrapbooks for their form, she soon found herself captivated by their content. "I didn't realize I'd find the stories as absorbing as I did. It's art history. It's social history. It's cultural history. It's regionally specific. You have these yearnings of people - a box of animal crackers next to a picture of Adolphe Menjou."

A woman named Mary Shultz would stain small swatches of linen - with ink, tea, or other common substances - and paste them, four to a page, in her scrapbook during the 1920s alongside handwritten notes on how to remove the stain. Also in the 1920s, Marybelle Harn filled pages of her scrapbooks with candy wrappers. (Who knew that Hershey's slogan was once "More Sustaining Than Meat"?)

Helfand believes there's another, even bigger factor in the growth of scrapbooking. "It's this very antebellum notion of carpe diem," she said. "That's what I found in the historical scrapbooks. And I think that is what has really resounded since 9/11: I may not be here tomorrow, so I'm going to take this picture and cement it in a book."

Helfand also sees the influence of other media on scrapbooking. One is reality TV: the unknown, average person grabbing for fame. Another is the Web, not just through the accessibility to materials afforded by eBay, search engines, and genealogy websites like ancestry.com. It's the opportunity to substitute scrap-page, as one might call it, for scrapbook.

"I gave a lecture to undergrads," Helfand said, "and the first question was, 'Isn't Facebook a scrapbook?' It's an immediate association that this 21-year-old made. One never knows, looking at these books, how intentionally private or public they were made to be. Obviously, with Facebook, that's much more controllable. You can engineer that in an instant."

Helfand said she didn't have any single favorite among the 2,000 vintage scrapbooks she examined for her book. She did have a favorite type, though. "The more eclectic, and in some cases the more chaotic, they are the more I'm drawn to them," she said. "By chaotic I mean form, content, size, shape, weird juxtapositions: prayer cards next to movie pinups, that sort of thing. Those are the people that just stole my heart."

Helfand still collects scrapbooks. With all her research, does she now look at them differently?

"I find myself looking at many things differently," she said.